Last updated May 24, 2020
Not to be confused with Deathlok or Dreadlock.
This article is about the computer science concept. For other uses, see Deadlock (disambiguation).
"Livelock" redirects here. For the video game, see Livelock (video game).

In concurrent computing, a deadlock is a state in which each member of a group is waiting for another member, including itself, to take action, such as sending a message or more commonly releasing a lock. [1] Deadlock is a common problem in multiprocessing systems, parallel computing, and distributed systems, where software and hardware locks are used to arbitrate shared resources and implement process synchronization. [2]

In a communications system, deadlocks occur mainly due to lost or corrupt signals rather than resource contention. [4]

A deadlock situation on a resource can arise if and only if all of the following conditions hold simultaneously in a system: [5]

These four conditions are known as the Coffman conditions from their first description in a 1971 article by Edward G. Coffman, Jr. [7]

While these conditions are sufficient to produce a deadlock on single-instance resource systems, they only indicate the possibility of deadlock on systems having multiple instances of resources. [8]

In this approach, it is assumed that a deadlock will never occur. This is also an application of the Ostrich algorithm. [10] [11] This approach was initially used by MINIX and UNIX. [7] This is used when the time intervals between occurrences of deadlocks are large and the data loss incurred each time is tolerable.

Under the deadlock detection, deadlocks are allowed to occur. Then the state of the system is examined to detect that a deadlock has occurred and subsequently it is corrected. An algorithm is employed that tracks resource allocation and process states, it rolls back and restarts one or more of the processes in order to remove the detected deadlock. Detecting a deadlock that has already occurred is easily possible since the resources that each process has locked and/or currently requested are known to the resource scheduler of the operating system. [11]

After a deadlock is detected, it can be corrected by using one of the following methods: [12]

Deadlock prevention works by preventing one of the four Coffman conditions from occurring.

A livelock is similar to a deadlock, except that the states of the processes involved in the livelock constantly change with regard to one another, none progressing.

The term was coined by Edward A. Ashcroft in a 1975 paper [15] in connection with an examination of airline booking systems. [16] Livelock is a special case of resource starvation; the general definition only states that a specific process is not progressing. [17]

Livelock is a risk with some algorithms that detect and recover from deadlock. If more than one process takes action, the deadlock detection algorithm can be repeatedly triggered. This can be avoided by ensuring that only one process (chosen arbitrarily or by priority) takes action. [18]

Phantom deadlocks are deadlocks that are falsely detected in a distributed system due to system internal delays but do not actually exist.

For example, if a process releases a resource R1 and issues a request for R2, and the first message is lost or delayed, a coordinator (detector of deadlocks) could falsely conclude a deadlock (if the request for R2 while having R1 would cause a deadlock). 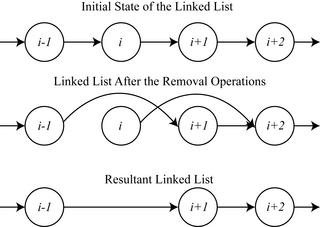 In computer science, rate-monotonic scheduling (RMS) is a priority assignment algorithm used in real-time operating systems (RTOS) with a static-priority scheduling class. The static priorities are assigned according to the cycle duration of the job, so a shorter cycle duration results in a higher job priority.

In computer science, the ostrich algorithm is a strategy of ignoring potential problems on the basis that they may be exceedingly rare. It is named for the ostrich effect which is defined as "to stick one's head in the sand and pretend there is no problem". It is used when it is more cost-effective to allow the problem to occur than to attempt its prevention.

The Banker algorithm, sometimes referred to as the detection algorithm, is a resource allocation and deadlock avoidance algorithm developed by Edsger Dijkstra that tests for safety by simulating the allocation of predetermined maximum possible amounts of all resources, and then makes an "s-state" check to test for possible deadlock conditions for all other pending activities, before deciding whether allocation should be allowed to continue.

In computer science, a lock convoy is a performance problem that can occur when using locks for concurrency control in a multithreaded application.

In computer science, resource contention is a conflict over access to a shared resource such as random access memory, disk storage, cache memory, internal buses or external network devices. A resource experiencing ongoing contention can be described as oversubscribed. 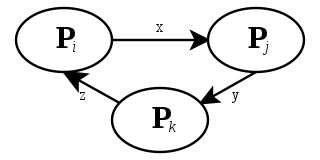 A wait-for graph in computer science is a directed graph used for deadlock detection in operating systems and relational database systems.

In computing, a hang or freeze occurs when either a process or system ceases to respond to inputs. A typical example is when computer's graphical user interface no longer responds to the user typing on the keyboard or moving the mouse. The term covers a wide range of behaviors in both clients and servers, and is not limited to graphical user interface issues.

A distributed operating system is a software over a collection of independent, networked, communicating, and physically separate computational nodes. They handle jobs which are serviced by multiple CPUs. Each individual node holds a specific software subset of the global aggregate operating system. Each subset is a composite of two distinct service provisioners. The first is a ubiquitous minimal kernel, or microkernel, that directly controls that node's hardware. Second is a higher-level collection of system management components that coordinate the node's individual and collaborative activities. These components abstract microkernel functions and support user applications.

In computer science, deadlock prevention algorithms are used in concurrent programming when multiple processes must acquire more than one shared resource. If two or more concurrent processes obtain multiple resources indiscriminately, a situation can occur where each process has a resource needed by another process. As a result, none of the processes can obtain all the resources it needs, so all processes are blocked from further execution. This situation is called a deadlock. A deadlock prevention algorithm organizes resource usage by each process to ensure that at least one process is always able to get all the resources it needs.

In computer science, a Lease is a contract that gives its holder specified rights to some resource for a limited period. Because it is time-limited, a lease is an alternative to a lock for resource serialization.

The Chandy–Misra–Haas algorithm resource model checks for deadlock in a distributed system. It was developed by K. Mani Chandy, Jayadev Misra and Laura M Haas.