Dino Gabriel is an Italian-born Anglican bishop of Natal [lower-alpha 1] in South Africa. He has a Swazi wife and they have four children. He is a fluent speaker of Zulu. 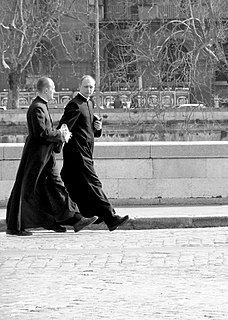 Translation is the transfer of a bishop from one episcopal see to another. The word is from the Latin trānslātiō, meaning "carry across".

In September 2019, after a tense and acrimonious meeting with the clergy of his diocese Gabriel tendered his resignation as bishop with immediate effect. [5]

The Zulu are a Bantu ethnic group of Southern Africa and the largest ethnic group in South Africa, with an estimated 10–12 million people living mainly in the province of KwaZulu-Natal.

John William Colenso was a British mathematician, theologian, Biblical scholar and social activist, who was the first Church of England Bishop of Natal.

Zululand may refer to:

Since the 1990s, the Anglican Communion has struggled with controversy regarding homosexuality in the church. In 1998, the 13th Lambeth Conference of Anglican bishops passed a resolution "rejecting homosexual practice as incompatible with Scripture". However, this is not legally binding. "Like all Lambeth Conference resolutions, it is not legally binding on all provinces of the Communion, including the Church of England, though it commends an essential and persuasive view of the attitude of the Communion." "Anglican national churches in Brazil, South Africa, South India, New Zealand and Canada have taken steps toward approving and celebrating same-sex relationships amid strong resistance among other national churches within the 80 million-member global body. The Episcopal Church in the U.S. has allowed gay marriage since 2015." "Church of England clergy have appeared to signal support for gay marriage after they rejected a bishops’ report which said that only a man and woman could marry in church." The Church of England's General Synod is set to discuss a diocesan motion "to create a set of formal services and prayers to bless those who have had a same-sex marriage or civil partnership". At General Synod in 2019, the Church of England announced that same-gender couples may remain married and recognised as married after one spouse experiences a gender transition provided that the spouses identified as opposite genders at the time of the marriage.

Eshowe is the oldest town of European settlement in Zululand. Eshowe's name is said to be inspired by the sound of wind blowing through the more than 4 km² of the indigenous Dlinza Forest, the most important and striking feature of the town. Although the name is most likely to be derived from the Zulu word for the Xysmalobium shrubs, showe or shongwe.

John Robert Dunn was a South African settler, hunter, and diplomat of British descent. Born in Port Alfred in 1834, he spent his childhood in Port Natal/Durban. He was orphaned as a teenager, and lived in native dress on the land near the Tugela River. His conversance with Zulu customs and language allowed his increasing influence among Zulu princes. In addition he was able to identify and exploit various opportunities for trade. He represented both colonial and Zulu interests, and rose to some influence and power when Cetshwayo became the Zulu sovereign. He acted as Cetshwayo's secretary and diplomatic adviser and was rewarded with chieftainship, land, livestock and two Zulu virgins. In the run-up to the Zulu War, he was served with an ultimatum by the British at the same time as Cetshwayo. He had to forgo any position of neutrality and sided with the British. In the aftermath he was allocated land in a buffer zone between the colony and Zululand. Besides his first wife Catherine, he took many Zulu women as wives and left a large Christian progeny when he died at age 60 or 61.

Vryheid is a coal mining and cattle ranching town in northern KwaZulu-Natal, South Africa. Vryheid is the Afrikaans word for "freedom".

The Anglican Church of Southern Africa, known until 2006 as the Church of the Province of Southern Africa, is the province of the Anglican Communion in the southern part of Africa. The church has twenty-nine dioceses, of which twenty-one are located in South Africa, three in Mozambique, and one each in Angola, Lesotho, Namibia, Swaziland and Saint Helena. In South Africa, there are between 3 and 4 million Anglicans out of an estimated population of 45 million.

Hans Paludan Smith Schreuder was a 19th-century Norwegian missionary who developed a close relationship with both the Zulu and British authorities.

The Roman Catholic Diocese of Eshowe is a diocese located in the city of Eshowe in the Ecclesiastical province of Durban in South Africa.

Alpheus Hamilton Zulu was an Anglican bishop in the second half of the 20th century. Educated at the University of South Africa, he was ordained in 1940. In 1948 he co-founded with the Revd Philip Mbata, Iviyo loFakazi bakaKristu : a charismatic movement within the Anglican Church.

Iviyo loFakazi bakaKristu is an evangelical and charismatic movement within the Anglican Church of Southern Africa.