Thomas Joseph Savage was an Anglican bishop in the third quarter of the 20th century.

Born on 5 February 1900, and educated at Highgate and Peterhouse, [1] he was ordained in 1927. [2] Following a curacy at St John’s, Waterloo Road [3] he worked at the South African Church Railway Mission and was then a Toc H padre. After a spell as rector of Springs, Transvaal he was vicar of Leominster then Tait Missioner for the Diocese of Canterbury. In 1955 he was appointed dean of Cape Town and three years later bishop of Zululand, a post he held to his death on 22 October 1966. [4]

The Free Church of England (FCE) is an episcopal church based in England. The church was founded when a number of congregations separated from the established Church of England in the middle of the 19th century.

Nigel Simeon McCulloch, is an Anglican bishop. He is a retired Bishop of Manchester in the Church of England. He was appointed in August 2002, taking up duties later that year and was installed in February 2003. He retired on his 71st birthday.

The Diocese of Yola is a diocese of the Anglican Church of Nigeria in the Province of Jos. The diocese was founded as one of the eight missionary dioceses created in northern Nigeria at the start of the Decade of Evangelism. It currently comprises six archdeaconries: Ganye, Koma Hills Parish, Mubi, Numan, Yola North and Yola South, with 39 parishes.

John Alexander Kirkpatrick Millar, known as Sandy Millar, is a retired Anglican bishop who, on 27 November 2005, was consecrated in Kampala as an assistant bishop in the Province of Uganda, in a joint initiative of the Archbishop of Uganda, the Archbishop of Canterbury and the Bishop of London. He was subsequently licensed at St Paul's Cathedral, London, on 9 February 2006 to act as an honorary assistant bishop in the Diocese of London. He thereafter served as priest-in-charge of St Mark's, Tollington Park in North London until 2 February 2011 when he retired. 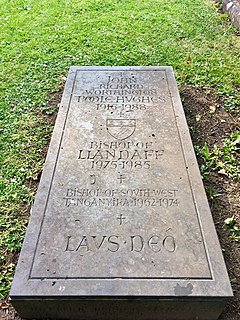 John Richard Worthington Poole-Hughes was a Bishop of South-West Tanganyika and a Bishop of Llandaff. 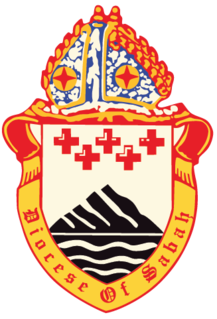 Ralph Emmerson was Bishop of Knaresborough from 1972 to 1979. Born in Leeds, West Yorkshire on 7 July 1913 he was educated at Leeds Grammar School and King's College London. He worked initially in the Youth Employment Department of Leeds Educational Authority before studying for ordination at Westcott House, Cambridge. An urban priest and keen cricketer amongst many appointments he was Vicar of Headingley, in 1966 he was appointed Canon Missioner for the Diocese of Ripon. In 1972 he was promoted again to be Suffragan Bishop of Knaresborough a post he held to his retirement in 1979. For a further seven years he helped out as an honorary assistant bishop in the diocese he had served so well.

Stanley Mark Wood was the third Anglican Bishop of Matabeleland and the first Bishop of Ludlow.

Roy Thomas Davies was a Welsh Anglican clergyman, who served as Bishop of Llandaff from 1985 to 1999.

Cuthbert Irvine Peacocke TD was the 8th Bishop of Derry and Raphoe, retiring in 1975.

The Lutheran Church of Christ in Nigeria (LCCN) is a major Lutheran denomination in Nigeria, a member of the Lutheran World Federation (LWF).

Thomas Hannay was an Anglican bishop.

Diocese of Nnewi is one of the dioceses in Church of Nigeria. It was carved out of the old Niger Diocese and inaugurated on 14 February 1996.