Duncan v. Louisiana, 391 U.S. 145 (1968), was a significant United States Supreme Court decision which incorporated the Sixth Amendment right to a jury trial and applied it to the states.

In October, 1966, Gary Duncan, a 19-year-old African-American, was driving down a Louisiana highway when he noticed his nephew Bert Grant and cousin Bernard St. Ann with a group of four white teenagers, including Herman Landry, on the side of the road. [1] He became concerned because his cousins had reported occurrences of "racial incidents" at the recently desegregated school. He pulled over the car, stepped out, and asked his cousins to get in the car. Landry insulted Duncan, calling him a racial slur. According to historian Matthew Van Meter, Duncan told Landry to go home, "reaching out to the boy's arm in a gesture that was both conciliatory and final." [2] The white youths testified that Duncan slapped Landry at this point, but Duncan and his relatives denied it. Duncan was arrested and ultimately charged with simple battery. As it was punishable by no more than two years, simple battery is a misdemeanor under Louisiana law and so he was not subject to trial by jury. Duncan was convicted and received a 60-day prison sentence and a fine of $150. He appealed on the grounds that the state had violated the Sixth and Fourteenth Amendments guaranteeing his right to a jury trial. The Court accepted the case, under its appellate jurisdiction from the Louisiana State Supreme Court.

Do the Sixth and Fourteenth Amendments guarantee the right to jury trial in state prosecutions where sentences as long as two years may be imposed?

The question for the court was whether an offense subject to two years' imprisonment is a "serious offense." The majority noted that at the time of ratification, crimes punishable by more than six months imprisonment were typically subject to jury trial. Furthermore, both federal law and 49 states recognized that a crime carrying a sentence of over one year necessitated a jury trial. The Court found that the Louisiana law was out of sync with both the historical and current standards of the justice system and so was ruled unconstitutional.

Justice Black, concurring, argues for total incorporation, holding that all amendments in the Bill of Rights are made applicable to the states by the Fourteenth Amendment. [3] He cites Congressional records from the ratification of the amendment to support his position. He holds that anything less than total incorporation would leave the enforcement of these rights to the whims of the judiciary.

Justice Fortas, concurring, believed that the right to jury trial is fundamental for serious offences, but it is not the court's role to dictate to the states what specific form such a jury trial should take. The states should be free to develop their own rules regarding the exercise of a jury trial and not to be held accountable to some historical or federal standard.

Justice Harlan, dissenting, wrote that states could devise their own systems, subject to the Constitution:

The States have always borne primary responsibility for operating the machinery of criminal justice within their borders, and adapting it to their particular circumstances. In exercising this responsibility, each State is compelled to conform its procedures to the requirements of the Federal Constitution. The Due Process Clause of the Fourteenth Amendment requires that those procedures be fundamentally fair in all respects. It does not, in my view, impose or encourage nationwide uniformity for its own sake; it does not command adherence to forms that happen to be old; and it does not impose on the States the rules that may be in force in the federal courts except where such rules are also found to be essential to basic fairness.

The Supreme Court ruled 7–2 in favor of Duncan by arguing that the right to a jury trial in criminal cases was fundamental and central to the American conception of justice. As such the Due Process Clause of the Fourteenth Amendment requires states to honor requests for jury trials. The Court maintained the common-law exception for "petty crimes," which are defined as those punishable by a maximum of a $500 fine and six months in prison. In such cases, states are not obligated to provide jury trials.

The Seventh Amendment to the United States Constitution is part of the Bill of Rights. This amendment codifies the right to a jury trial in certain civil cases and inhibits courts from overturning a jury's findings of fact.

Hurtado v. California, 110 U.S. 516 (1884), was a landmark case decided by the United States Supreme Court that allowed state governments, as distinguished from the federal government, to avoid using grand juries in criminal prosecutions.

Apodaca v. Oregon, 406 U.S. 404 (1972), was a United States Supreme Court case in which the Court held that state juries may convict a defendant by a less-than-unanimous verdict in a felony criminal case. The four-justice plurality opinion of the court, written by Justice White, affirmed the judgment of the Oregon Court of Appeals and held that there was no constitutional right to a unanimous verdict. Although federal law requires federal juries to reach criminal verdicts unanimously, the Court held Oregon's practice did not violate the Sixth Amendment right to trial by jury and so allowed it to continue. In Johnson v. Louisiana, a case decided on the same day, the Court held that Louisiana's similar practice of allowing criminal convictions by a jury vote of 9–3 did not violate due process or equal protection under the Fourteenth Amendment.

Griffin v. California, 380 U.S. 609 (1965), was a United States Supreme Court case in which the Court ruled, by a 6-2 vote, that it is a violation of a defendant's Fifth Amendment rights for the prosecutor to comment to the jury on the defendant's declining to testify, or for the judge to instruct the jury that such silence is evidence of guilt.

Taylor v. Louisiana, 419 U.S. 522 (1975), was a landmark decision of the US Supreme Court which held that women could not be excluded from a venire, or jury pool, on the basis of having to register for jury duty. The court overturned Hoyt v. Florida, the 1961 case that had allowed such a practice.

Burch v. Louisiana, 441 U.S. 130 (1979), was a case decided by the United States Supreme Court that invalidated a Louisiana statute allowing a conviction upon a nonunanimous verdict from a jury of six for a petty offense. The statute allowed for conviction if only five jurors agreed, and this was held to be a violation of the Sixth Amendment.

Estelle v. Williams, 425 U.S. 501 (1976), is a Supreme Court case involving Harry Lee Williams' conviction of assault on his former landlord in Harris County, Texas. While awaiting trial Williams was unable to post bail. He was tried in his prison uniform, and later was found guilty. He sought a writ of habeas corpus saying being tried in a prison uniform violated his Constitutional rights in accordance with the 14th Amendment. The Court of Appeals ruled that the accused does not have to stand trial in identifiable prison clothes and Williams’ right to due process was violated. The Supreme Court reversed, reinstating the conviction, on June 21, 1976. 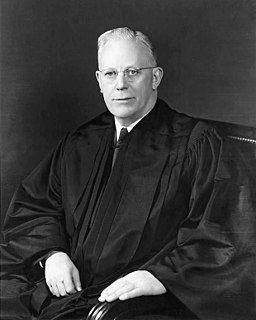 The United States Constitution contains several provisions regarding the law of criminal procedure.

The blank pad rule is a legal doctrine and metaphor in common law that requires a tribunal to base its decision solely upon evidence established at trial. In the United States, the Supreme Court has established that in order for a trial to be fair and impartial, a "jury's verdict [must] be based on evidence received in open court, not from outside sources".

Pointer v. Texas, 380 U.S. 400 (1965), was a decision by the United States Supreme Court involving the application of the right of to confront accusers in state court proceedings. The Sixth Amendment in the Bill of Rights states that, in criminal prosecutions, the defendant has a right "...to be confronted with the witnesses against him; to have compulsory process for obtaining witnesses in his favor..." In this case, a person arrested in Texas for robbery was deprived of the ability to cross-examine a witness when the lower court allowed the introduction of a transcript of that witness's earlier testimony at a preliminary proceeding instead of compelling attendance by the witness at trial.

Ramos v. Louisiana, 590 U.S. ___ (2020), was a U.S. Supreme Court decision in which the Court ruled that the Sixth Amendment to the U.S. Constitution requires that guilty verdicts for criminal trials be unanimous. Only cases in Oregon were affected by the ruling, because every other state already had this requirement. The decision incorporated the Sixth Amendment requirement for unanimous jury criminal convictions against the states, and thereby overturned the Court's previous decision from the 1972 case Apodaca v. Oregon.

Baldwin v. New York, 399 U.S. 66 (1970), was a decision of the U.S. Supreme Court in which the Court ruled that defendants have a Sixth Amendment right to a jury trial for offenses requiring imprisonment of more than six months.

Edwards v. Vannoy is a United States Supreme Court case involving the Court's prior decision in Ramos v. Louisiana, 590 U.S. ___ (2020), which had ruled that jury verdicts in criminal trials must be unanimous under the Sixth Amendment to the U.S. Constitution. The Supreme Court ruled 6–3 that Ramos did not apply retroactively to earlier cases prior to their verdict in Ramos.