Jan Eddie Axberg (born 9 July 1947) is a Swedish actor and audio engineer. [2] He has appeared in more than 50 films and television shows since 1959. At the 8th Guldbagge Awards he won the award for Best Actor for his roles in The Emigrants and The New Land . [3]

The 8th Guldbagge Awards ceremony, presented by the Swedish Film Institute, honored the best Swedish films of 1971 and 1972, and took place on 23 October 1972. The Apple War directed by Tage Danielsson was presented with the award for Best Film. 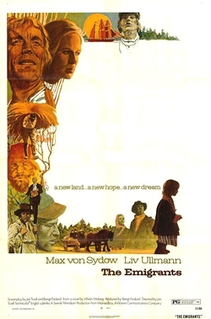 Ormen, also known as The Serpent, is a 1966 Swedish drama film directed by Hans Abramson. Christina Schollin won the award for Best Actress at the 3rd Guldbagge Awards. 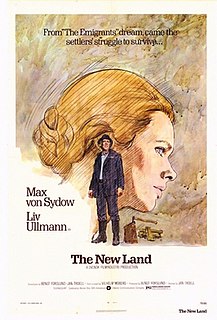 The New Land is a 1972 Swedish film co-written and directed by Jan Troell and starring Max von Sydow, Liv Ullmann and Eddie Axberg. It is a sequel to Troell's The Emigrants (1971); both are based on The Emigrants novels by Vilhelm Moberg. Drawing its story from the last two of these novels — The Settlers (1956) and The Last Letter Home (1959) — the film is about Swedish immigrants establishing their home in Minnesota during the Dakota War of 1862.

Max von Sydow is a Swedish-born French actor. He has held French citizenship since 2002. He has appeared in many European and American films in several languages, including Swedish, English, Norwegian, Danish, German, French, Italian, and Spanish. He received the Royal Foundation of Sweden's Cultural Award in 1954, was made a Commandeur des Arts et des Lettres in 2005, and was named a Chevalier de la Légion d'honneur on 17 October 2012. 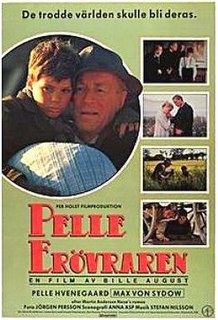 Pelle the Conqueror is a 1987 epic film co-written and directed by Bille August, based upon the famous 1910 novel of the same name by Danish writer Martin Andersen Nexø. The film tells the story of two Swedish immigrants to Denmark, a father and son, who try to build a new life for themselves. It stars Pelle Hvenegaard as the young Pelle, with Max von Sydow as his father, and also features Axel Strøbye and Astrid Villaume.

Hans Folke "Hasse" Alfredson was a Swedish actor, film director, writer and comedian. He was born in Malmö, Sweden. He is known for his collaboration with Tage Danielsson as the duo Hasse & Tage. His most celebrated contribution to their brand of humorist humanism was his ability to extemporize wildly absurd comic situations, for example in the Lindeman dialogues.

Peter-No-Tail is a 1981 Swedish animated film based on the children's book series by Gösta Knutsson.

Peter-No-Tail is a 1997 Swedish Live-Action SVT's Christmas calendar TV series initiated by SVT Dramas executive chief Mark Levengood. The series is based on Gösta Knutssons's books and was well received by both children and grownups. The script was written by Pernilla Oljelund.

Peter-No-Tail in Americat is a 1985 Swedish animation based on stories about the tail-less cat Pelle Svanslös by Gösta Knutsson. The cartoon is a sequel to the 1981 cartoon Peter-No-Tail, and is known in Sweden for its extremely surreal content.

Axel Düberg was a Swedish film actor. He was born and died in Stockholm, Sweden.

Agneta Prytz was a Swedish movie and stage actress who appeared in thirty-six films over the course of her career. Prytz was the wife of Swedish director, Gösta Folke.

Jan Gissberg is a Swedish cartoonist, animator and film director. After studying at Konstfack in Stockholm he started working as an animator under Stig Lasseby, and later went on to direct by himself. As a cartoonist he is best known for drawing Rudolf Petersson's 91:an Karlsson, and for his high production speed.

Here Is Your Life is a Swedish coming-of-age film directed by Jan Troell. It was released to cinemas in Sweden on 26 December 1966, The film is based on a novel of the same name, the second of Eyvind Johnson's semi-autobiographical series of four novels Romanen om Olof, about a working-class boy growing up in the northern parts of Sweden. 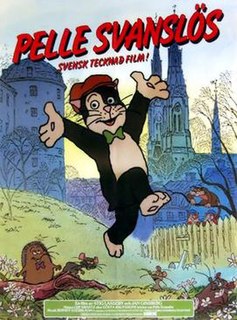 Pelle Svanslös is a fictional anthropomorphic cat created by the Swedish author Gösta Knutsson and a children's book series about him.

Göran Thorell is a Swedish actor. He studied at the Swedish National Academy of Mime and Acting.

Christer Michael Fant is a Swedish actor. He is son to the actor George Fant. He played the valet Melker in the 2011 "Sveriges Radios julkalender" Allt du önskar. In the 80s he hosted the TV program Guldslipsen.

Stig Gunnar Lasseby was a Swedish animator, director and producer. Through his company Team Film he played an important role in the history of Swedish animation.

To Be a Millionaire is a 1980 Swedish comedy film directed by Mats Arehn. The film won the Guldbagge Award for Best Film at the 16th Guldbagge Awards.