Egyptian League Cup was an Egyptian football tournament. This championship was held once in 2000 and El Qanah from Port Said won the cup. [1] 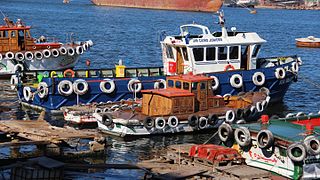 Port Said is a city that lies in north east Egypt extending about 30 kilometres (19 mi) along the coast of the Mediterranean Sea, north of the Suez Canal, with an approximate population of 603,787 (2010). The city was established in 1859 during the building of the Suez Canal.

The CAF Africa Cup of Nations, officially CAN, also referred to as AFCON, or Total Africa Cup of Nations for sponsorship reasons, is the main international association football competition in Africa. It is sanctioned by the Confederation of African Football (CAF) and was first held in 1957. Since 1968, it has been held every two years. The title holders at the time of a FIFA Confederations Cup qualify for that competition.

The Egypt national football team, known colloquially as The Pharaohs, represents Egypt in men's International association football and is governed by the Egyptian Football Association (EFA) founded in 1921, the governing body for football in Egypt. The team's historical stadium is Cairo International Stadium but since 2012 the team has played most home games at Borg El Arab Stadium in Alexandria. Between 1958 and 1961, the team combined with Syria to form the United Arab Republic national football team, although the team's records are attributed only to Egypt by FIFA.

Al Ahly Sporting Club is an Egyptian sports club based in Cairo, Egypt. It is known as "The Club of the Century" in African football. It is best known for its professional football team that plays in the Egyptian Premier League, the top tier in the Egyptian football league system, and is the most decorated football club in Africa. It was founded on 24 April 1907, as a gathering place for Cairo's Student Unions. 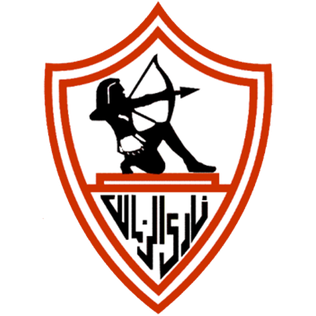 Zamalek Sporting Club is an Egyptian sports club based in Giza, Egypt. They are best known as for their professional football team, which plays in the Egyptian Premier League, the top tier of the Egyptian football league system. Zamalek is a titled club in Africa - 20th century.The club was founded on 5 January 1911 as Qasr Al Nile Club and was first headed by Belgian lawyer George Marzbach. The name was changed to Al Mokhtalat Club in 1913 and in 1941 it was changed again to King Farouk Club, named after King Farouk. The name finally settled as Zamalek SC after the 1952 Egyptian revolution. Zamalek has been relegated to the Second Division once. On the continental side, Zamalek has won more CAF trophies than any other African team( After Ahly FC) in the Twentieth century. The club has 5 CAF Champions League titles, 3 CAF Super Cup titles and 1 African Cup Winners' Cup title. Internationally, Zamalek has also won 2 Afro-Asian Cup titles.

Hossam Hassan Hussein is an Egyptian retired footballer who played as a striker, and the current manager of Smouha SC in the Egyptian Premier League.

The Cairo International Stadium or "Stad El Qahira El Dawly", is an Olympic-standard, multi-use stadium with an all-seated capacity of 75,000. The architect of the stadium is the German Werner March, who had built from 1934 to 1936 the Olympic Stadium in Berlin. Before becoming an all seater stadium, it had the ability to hold over 100,000 spectators, reaching a record of 120,000. It is the foremost Olympic-standard facility befitting the role of Cairo, Egypt as the center of events in the region. It is also the 69th largest stadium in the world. Located in Nasr City; a suburb north east of Cairo, it was completed in 1960, and was inaugurated by President Gamal Abd El Nasser on 23 July that year, the eighth anniversary of the Egyptian Revolution of 1952. Zamalek SC currently use the Petro Sport Stadium for most of their home games and Al Ahly use Al-Salam Stadium for most of their home games.

Hassan Shehata, nicknamed The Boss, is an Egyptian football coach and former player.

The Egypt Cup is the main knockout football cup competition in Egypt.

Héctor Raúl Cúper is an Argentine football manager and former player who is the manager of the Uzbekistan national team.

Al-Masry Sporting Club is an Egyptian sports club based in Port Said, Egypt. It is best known for its professional football team, which plays in the Egyptian Premier League, the top tier of the Egyptian football league system. Founded on 18 March 1920 by a group of Egyptians in Port Said to be the first club for Egyptians in this coastal city which was full of many other clubs for the foreign communities which inhabited there.

Al-Mokawloon al-Arab Sporting Club, also known as Arab Contractors Sporting Club and shortly as Al Mokawloon between the locals, is an Egyptian sports club based in Nasr City, Cairo. The club was founded in 1973 by the Egyptian engineer, contractor, entrepreneur, and politician Osman Ahmed Osman as the official sporting club for his company, the Arab Contractors. The club is best known for their football team, which currently plays in the Egyptian Premier League, the highest league in the Egyptian football league system.

Essam Kamal Tawfiq El-Hadary is an Egyptian professional footballer who plays as a goalkeeper for Nogoom. 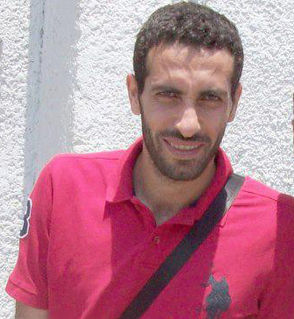 Mohamed Aboutrika is a retired Egyptian professional footballer who played as a second striker and an attacking midfielder for the Egyptian club Al Ahly and Egypt national team; he also played for Tersana, as well as Baniyas. He is often considered the best midfielder in the Egyptian history & is widely regarded as one of the greatest African footballers of all time. Aboutrika has the record of most Africa Best Player of the Year. The award is given by CAF for the players based in Africa. He also came second in the African Footballer of the Year award in 2008 after Emmanuel Adebayor, and was one of five nominees for the 2006 award, and one of the ten nominated for the 2013 award.

The Egypt Davis Cup team represents Egypt in Davis Cup tennis competition and are governed by the Egyptian Tennis Federation.

Mahmoud-el-Gohary was an Egyptian international football player who played as a striker for Al Ahly from 1955 to 1961. He was forced into early retirement in 1961 due to a persistent knee injury and moved into coaching, and eventually management. As a manager, he is best known for leading the Egyptian national team to the 1990 World Cup and for being the only person to have managed both Al Ahly and Zamalek SC, Egyptian teams with a fierce rivalry. Mahmoud El-Gohary is considered to be one of Egypt and Africa's greatest football icons.

Football is the main sport in Egypt. Egyptians gather around to watch various Egyptian clubs and the Egyptian national football team play almost on a daily basis.

Mohamed Salah Hamed Mahrous Ghaly is an Egyptian professional footballer who plays as a forward for Premier League club Liverpool and the Egypt national team. He is considered Europe's top five leagues' fifth most expensive player from a transfer value perspective by the CIES.