Encyclopaedia Metallum: The Metal Archives (commonly known as Metal Archives per the URL or just MA) is a website which lists bands of predominantly heavy metal music. [2] Encyclopaedia Metallum was described by Matt Sullivan of Nashville Scene as "the Internet's central database for all that is 'tr00' in the metal world." [3] Terrorizer described the site as "a fully-exhaustive list of pretty much every metal band ever, with full discographies, an active forum and an interlinking members list that shows the ever-incestuous beauty of the metal scene". [4] Nevertheless, there are exceptions for bands which fall under disputed genres not accepted by the website.

Encyclopaedia Metallum attempts to provide comprehensive information on each band, such as a discography, logos, pictures, lyrics, line-ups, biography, trivia and user-submitted reviews. The site also provides a system for submitting bands to the archives. The website is free of advertisements and is run completely independently.

The Encyclopaedia Metallum was officially launched on July 17, 2002 by a Canadian couple from Montreal using the pseudonyms HellBlazer and Morrigan. A couple years prior, HellBlazer had the idea of an encyclopedia for heavy metal and attempted to create an HTML page for every metal band by hand. Although he gave up with that initial attempt, a fully automated site with contributions from its users was in the works. [5] The site initially went live early in July 2002 and the first band (Amorphis) was added on July 7. [6] In just over a year the site had amassed a database of over 10,000 bands. [7] The site continues to grow at a rate of about 500 bands per month. [8]

On 1 January 2013, the site announced that bands with entirely digital discographies could now be submitted to the Archives, changing the site's decade-long policy of physical releases only. [9] Digital releases must have a fixed track listing, album art, professional or finished production and be available in a high-quality or lossless format through official distribution sources (such as Bandcamp and/or iTunes).

The site has a tradition of April Fool's Day pranks that are sometimes taken seriously. This started in 2009 with the addition of Korn into the Metal-Archives and several dozen user reviews praising their first self-titled album, with the news article of the day claiming that the first album was metal enough for the site. A series of staged arguments between moderators appeared throughout the day on the site's forum. 2010 was the year they removed "The Tavern" (the general discussion forum) for a day. In 2012 the site posted an FBI logo on the main page, suggesting that the site was suspended by the FBI as a result from the SOPA and PIPA bill, which was a much-talked about phenomenon in the media around this time. Despite the ability to bypass this image just by clicking on it, many people took the prank seriously and thought that Metal Archives had actually been shut down for promoting internet piracy. [11] Nickelback was added to the Metal-Archives in 2013 in a prank that was similar to the 2009 Korn prank, as it also had user submitted joke reviews praising various Nickelback albums.

In 2014, the prank consisted on the addition of several (mostly praising) reviews of an EP called Penis Metal released by Chilean black metal band Hades Archer, followed by the addition of the band's logo and pictures which included penis on them. The band's style was also changed to Penis Metal. A secondary prank involved the spontaneous deletion of controversial band Meshuggah (whose genre was listed on the site as "technical nu-metal/djent" and later changed to simply "djent"), leading to another series of arguments between moderators on the site's forum, although not to the extent of the 2009 prank. Meshuggah were reinstated the following day. For the 2015 prank a hoax news story was posted "announcing" that the site was no longer free to use and the site was introducing paid membership features. A following news post revealed that the previous post was a prank. [12] [13] In 2016, following an argument between moderators and users alike on the question of moderating reviews, an announcement was made that reviews were no longer being accepted and that all existing ones would be deleted. Later the same day another announcement was made that the staff had changed their minds by bringing back the reviews as well as having every future review accepted automatically. This resulted in a wave of joke reviews that were deleted from the site the next day. [14] [15]

In 2017, the staff members announced that they would now produce articles commentating on the metal scene, and proceeded to post tabloid and gossip articles on the site. These were taken down the next day. In 2018, the website announced that it was no longer accepting new band submissions, arguing, "We currently have over 120,000 bands, more than we ever thought possible. That is more than enough to declare our database 100% complete. Safe to say, no other resource comes close to being as thorough and comprehensive." The "last" band to be added on the site was Michael Schenker Fest. Later that day, the website revealed that this was an April Fool's prank, and wrote, "Band submissions are open again. Here's to another 120,000 bands and more!." In 2019, the website announced it was deleting most pages and would only list bands deemed "good" by the staff. [16]

Traditional heavy metal genres and era (such as the NWOBHM) have stringent rulings; users are warned in the rules section to consider bands submitted under these classifications as "ambiguous," in the sense that if a band is submitted with these terms as their genre, the music will be extensively reviewed by the moderators before they decide whether or not to accept the band onto the website. [17] This is because in the past, some submissions labeled with those genres have turned out not to be metal, according to the site's guidelines. Some bands which are commonly referred to as traditional heavy metal or NWOBHM, such as Def Leppard, Mötley Crüe, Scorpions and Stryper, are on the website due to only one or two of the bands' albums meeting the website's specifications.

Additionally, there are some non-metal bands featured on the site that are considered to be part of the metal scene despite not being metal themselves (usually dark ambient and folk bands, examples being Mortiis, Elend, Nest, Of The Wand & The Moon, Autumn Tears, Stille Volk, etc.). These bands are selected by the moderators "in an admittedly arbitrary fashion," and their submission by normal users is discouraged. [18] Their submission was entirely restricted to site staff in September 2015. [19]

Certain genres related to metal that the site does not accept are djent and nu metal, although some bands who are on the site have released albums in the latter genre (examples being Machine Head, who released two nu-metal albums while the genre was at its peak in popularity, but have spent most of their career as a groove metal band, and Soulfly, who started out as nu-metal before moving away from that sound, and were accepted on the basis of their later albums). Metalcore and deathcore are only allowed on the site if the moderators consider at least one album "clearly more metal than core", examples being As I Lay Dying, Killswitch Engage, After the Burial, Carnifex, All Shall Perish, The Red Chord and Despised Icon are allowed on the site while Bring Me the Horizon, Atreyu, Born of Osiris, Between the Buried and Me and Oceano are not allowed. [20] 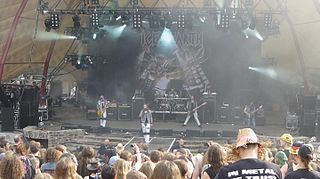 Discogs is a website and crowdsourced database of information about audio recordings, including commercial releases, promotional releases, and bootleg or off-label releases. The Discogs servers, currently hosted under the domain name discogs.com, are owned by Zink Media, Inc. and located in Portland, Oregon, US. While the site was originally created with a goal of becoming the largest online database of electronic music, there are now releases in all genres and on all formats on the site. In fact, after the database was opened to contributions from the public, rock music began to take over as the most prevalent genre. Discogs currently contains over 11.6 million releases, by over 6 million artists, across over 1.3 million labels, contributed from over 456,000 contributor user accounts—with these figures constantly growing as users continually add previously unlisted releases to the site over time.

Metalium was a power metal band from Hamburg, Germany, founded in 1999 and disbanded in 2011. Their style of music was that of the traditional power metal sound which was pioneered by bands such as Helloween and Blind Guardian.

Rate Your Music is an online collaborative metadata database of musical and non-musical releases and films which can be catalogued, rated and reviewed by users. 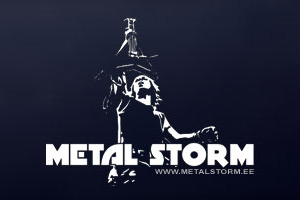 Metal Storm is a webzine specializing in various forms of heavy metal music. It is based in Tallinn, Estonia but caters to an international audience, symbolically recognized by the acquisition of an EU domain in 2008. As of June 2013, the website hosts 7,812 band profiles, 7,800 reviews, 553 interviews and 16,753 news items.

David L. Reece is an American vocalist who has been active in the heavy metal rock scene professionally since the late 1980s, recording with several bands in diverse genres including Bonfire from January 2015 to July 2016. He is best known for his time with the band Accept, appearing on their 1989 album Eat the Heat.

Imgur is an American online image sharing community and image host founded by Alan Schaaf in 2009. The service has been popular with hosting viral images and memes, particularly those posted on Reddit.

Djent is a subgenre of progressive metal. Its distinctive sound is a high-gain, distorted, palm-muted, low-pitch guitar sound. The name "Djent" is an onomatopoeia of this sound.

Horned Almighty is a Danish black metal band. The band was formed by S. and Hellpig out of the ashes of their former band Mareridt (1995-2000). After a year of using programmed drums, Harm was recruited into the band in 2003. Luger and Aries joined in 2005.

Kabir Akhtar is an American television director and editor, who won an Emmy Award in 2016. His credits include work for Arrested Development, Crazy Ex-Girlfriend, New Girl, Behind the Music, and the Academy Awards. 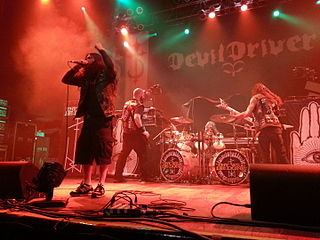 Thy Will Be Done is an American heavy metal band formed in 2005 from Providence, Rhode Island. The ensemble has released studio albums Was and Is to Come and In Ancient of Days via Stillborn Records as well as EP Temple via Eye.On Lion Recordings.

Eve of Alana is a German-Argentinian Alternative Metal, Nu Metalcore and Djent band from St. Pauli, Hamburg, Germany, formed in 2017.