Ernest Robert Clark (born August 11, 1937) is a former professional American football player who played linebacker for six seasons for the Detroit Lions and the St. Louis Cardinals. Ernie Clark, known as EC burst on the scene at Michigan State University in 1959. He played both ways, offense and defense. He was feared on Defense and often teams ran away from his end. He was known for shedding blockers and making the tackles sure, hard, fast and furious. In 1961, number 6 ranked Stanford came to Michigan State and Ernie Clark dominated them. On an early play an offensive back left his feet to throw a block against EC. Clark caught him in midair, through him to the side and tackled the ball carrier still in the back field. This ignited the fan base and they never stopped, the result was a 31-3 trouncing of Stanford, the number 6 ranked school in the nation. The Spartans were talent laden that year. Clark and his teammates led Michigan State to be ranked #8 in the final AP Poll of that year. Clark was one of six taken the next year in the NFL.

I was at Michigan State from 1959-1963 and personally saw all (at least) all the home games. I was present and EC was a big fan favorite and often made exciting plays to stir up the crowd.

Ernie Sims III is a former American football linebacker. He played college football at Florida State and was drafted by the Detroit Lions in the first round of the 2006 NFL Draft. He also played for the Philadelphia Eagles, Indianapolis Colts and Dallas Cowboys.

Kevin Lamont Hardy is a former American football linebacker in the National Football League (NFL) for the Jacksonville Jaguars, Dallas Cowboys, and Cincinnati Bengals. He played college football at the University of Illinois.

Michael Devin Griffin is a former American football safety who played 10 seasons in the National Football League (NFL). He played college football at Texas. He was drafted by the Tennessee Titans in the first round of the 2007 NFL Draft.

Brodrick Bunkley is a former American football nose tackle. He was drafted by the Philadelphia Eagles in the first round of the 2006 NFL Draft. He played college football at Florida State. Bunkley also played for the Denver Broncos and New Orleans Saints.

Clark Daniel Shaughnessy was an American football coach and innovator. He is sometimes called the "father of the T formation" and the original founder of the forward pass, although that system had previously been used as early as the 1880s. Shaughnessy did, however, modernize the obsolescent T formation to make it once again relevant in the sport, particularly for the quarterback and the receiver positions. He employed his innovations most famously on offense, but on the defensive side of the ball as well, and he earned a reputation as a ceaseless experimenter.

Anthony B. Smith is a former American football safety who played for six seasons in the National Football League (NFL). After playing college football for Syracuse, he was drafted by the Pittsburgh Steelers in the third round of the 2006 NFL Draft. Smith has also been a member of the Jacksonville Jaguars, Green Bay Packers, and Tennessee Titans. He is a two-time Super Bowl Champion with the Steelers in 2009 and the Packers in 2011. Smith retired from professional football in 2012.

Patrick William Fitzgerald Jr. is the current head coach of the Northwestern University Wildcats football team. He was selected after the unexpected death of Randy Walker and announced at a press conference on July 7, 2006. He was 31 at the time, making him the youngest head football coach in the Big Ten Conference and NCAA Division I FBS by five years. As a linebacker for Northwestern from 1993 to 1996, he won both the Bronko Nagurski Trophy and Chuck Bednarik Award twice as the best defensive player in college football. He was inducted into the College Football Hall of Fame in 2008.

Bobby Grayson was an American football player. He was a two-time consensus All-American player who led the Stanford University football team to three consecutive Rose Bowl Games from 1933 to 1935.

The Stanford Cardinal football program represents Stanford University in college football at the NCAA Division I FBS level and is a member of the Pac-12 Conference's North Division. Stanford has a highly successful football tradition. The team is currently known as the Cardinal, adopted prior to the 1982 season. Stanford was known as the "Indians" from 1930 to January 1972, and the "Cardinals" from 1972 through 1981. A student vote in December 1975 to change the nickname to "Robber Barons" was not approved by administrators.

Christopher Jerrod Hinton is a former American football tackle and guard who played in the National Football League for 13 seasons, primarily with the Indianapolis Colts franchise. In addition to his seven seasons with the Colts, he played with the Atlanta Falcons for four seasons, and the Minnesota Vikings for two seasons.

Dixon Voldean Edwards, III is a former American football linebacker in the National Football League for the Dallas Cowboys and Minnesota Vikings. He played college football at Michigan State University.

William Martin Heston was an American football player and coach. He played halfback at San Jose State University and the University of Michigan. Heston was the head football coach for Drake University in 1905 and North Carolina College of Agriculture and Mechanic Arts, now North Carolina State University, in 1906. After he retired from coaching, he practiced law and served as a state court judge in Michigan. Heston was elected to the College Football Hall of Fame in 1954. He was selected by the Football Writers Association of America as the halfback for its all-time team for the first 50 years of the sport. University of Michigan coach Fielding H. Yost rated him as the greatest player of all-time.

Ernest Wiley Caddel was an American football running back. He played college football for Glenn "Pop" Warner at Stanford University from 1930 to 1932 and later played six seasons in the National Football League for the Portsmouth Spartans (1933) and Detroit Lions (1934–1938). He helped lead the Detroit Lions to the NFL championship in 1935 and led the NFL in average yards gained per rushing carry for three consecutive years, from 1935 to 1937. He was also the first player in NFL history to finish among the top 10 players in the league in both rushing and receiving yards, accomplishing the feat in 1934 and again in 1936. He was known during his football career as the "Blond Antelope."

The 1964 Oregon State Beavers football team represented Oregon State University in the 1964 NCAA University Division football season. The Beavers ended this season with eight wins and three losses in their first season in the Athletic Association of Western Universities after competing as an independent for five years. The team captains were Dick Ruhl and Booker Washington. The Beavers scored 149 points and allowed 124 points. Led by head coach Tommy Prothro, Oregon State won the Athletic Association of Western Universities conference championship and represented the conference in the 1965 Rose Bowl. It was the last bowl game for the Beavers until the 1999 season. 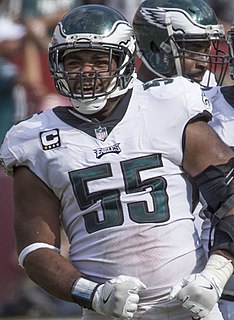 Brandon Lee Graham is an American football defensive end for the Philadelphia Eagles of the National Football League (NFL). He was drafted by the Eagles in the first round of the 2010 NFL Draft with the thirteenth selection in the draft and the first from the Big Ten Conference. He played college football at Michigan.

The 1973 Michigan Wolverines football team represented the University of Michigan in the 1973 Big Ten Conference football season. In his fifth year as Michigan's head coach, Bo Schembechler led the team to a 10–0–1 record. It was Michigan's first undefeated season since 1948. The Wolverines outscored their opponents 330 to 68. Michigan was ranked No. 6 in both of the major post-season polls. Two other selectors, the National Championship Foundation and the Poling System, recognize Michigan as a co-national champion for the 1973 season.

The 1949 Michigan Wolverines football team represented the University of Michigan in the 1949 Big Nine Conference football season. In their second season under head coach Bennie Oosterbaan, the Wolverines compiled a 6–2–1 record, tied with Ohio State for the Big Ten Conference championship, were ranked No. 7 in the final AP Poll, and outscored all opponents by a combined total of 135 to 85. On October 8, 1949, the Wolverines had their 25-game winning streak broken in 21–7 loss to Army.

The 1921 Michigan Wolverines football team represented the University of Michigan in the 1921 Big Ten Conference football season. In his 21st year as head coach, Fielding H. Yost led Michigan to a 5–1–1 record, as the Wolverines outscored their opponents with a combined score of 187 to 21. Michigan recorded shutouts in five of its seven games, allowing only 14 points in a loss to Ohio State and 7 points in a tie with Wisconsin. Over the course of five home games at the newly expanded Ferry Field, the Wolverines attracted crowds totaling 143,500 with receipts totaling $170,000.

Michael Brendan Martin is an American football defensive end who is currently a free agent. He was selected by the Tennessee Titans in the third round of the 2012 NFL Draft. He played college football for the Michigan Wolverines from 2008 to 2011. At Michigan, Martin recorded 172 tackles and appeared in 49 games, including 37 games as the Wolverines' starting nose tackle. He was selected as a second-team All-Big Ten Conference player by both the coaches and media in 2011 and received the same recognition from the coaches in 2010. In high school, he was the state Gatorade Player of the Year in football. He was also a two-time Michigan High School Athletic Association (MHSAA) state wrestling champion as well as a two-time MHSAA state shot put champion.