Exim is a mail transfer agent (MTA) used on Unix-like operating systems. Exim is free software distributed under the terms of the GNU General Public License, and it aims to be a general and flexible mailer with extensive facilities for checking incoming e-mail.

Exim has been ported to most Unix-like systems, as well as to Microsoft Windows using the Cygwin emulation layer. Exim 4 is currently the default MTA on Debian GNU/Linux systems.

Many Exim installations exist, especially within Internet service providers [2] and universities in the United Kingdom. Exim is also widely used with the GNU Mailman mailing list manager, and cPanel.

In March 2021 a study performed by E-Soft, Inc., [3] approximated that 60% of the publicly reachable mail-servers on the Internet ran Exim, making it the most popular mail server.

The first version of Exim was written in 1995 by Philip Hazel for use in the University of Cambridge Computing Service’s e-mail systems. The name initially stood for EXperimental Internet Mailer. [4] It was originally based on an older MTA, Smail-3, but it has since diverged from Smail-3 in its design and philosophy. [5] [6]

Exim, like Smail, still follows the Sendmail design model, where a single binary controls all the facilities of the MTA. Exim has well-defined stages during which it gains or loses privileges. [7]

Exim's security has had a number of serious security problems diagnosed over the years. [8] Since the redesigned version 4 was released there have been four remote code execution flaws and one conceptual flaw concerning how much trust it is appropriate to place in the run-time user; the latter was fixed in a security lockdown in revision 4.73, one of the very rare occasions when Exim has broken backwards compatibility with working configurations.

Exim is highly configurable and therefore has features that are lacking in other MTAs. It has always had substantial facilities for mail policy controls, providing facilities for the administrator to control who may send or relay mail through the system. In version 4.x this has matured to an Access Control List based system allowing very detailed and flexible controls. The integration of a framework for content scanning, which allowed for easier integration of anti-virus and anti-spam measures, happened in the 4.x releases. This made Exim very suitable for enforcing diverse mail policies.

The configuration is done through a (typically single) configuration file, which must include the main section with generic settings and variables, as well as the following optional sections:

There are two main schools of configuration style for Exim. The native school keeps the Exim configuration in one file and external files are only used as data sources; this is strongly influenced by Philip Hazel's preferences and notes on performance as the configuration file is re-read at every exec, which happens post-fork for receiving inbound connections and at delivery.

The second commonly encountered style is the Debian style which is designed to make it easier to have an installed application automatically provide mail integration support without having the administrator edit configuration files. There are a couple of variants of this and Debian provide documentation of their approach as part of the packages. In these approaches, a debconf configuration file is used to build the Exim configuration file, together with templates and directories with configuration fragments. The meta-config is tuned with macros which have names starting DC_. When the supervisor for exim is invoked it re-processes the configuration files producing a single-file configuration that the exim binary uses.

Exim has extensive and exhaustive documentation; if a feature or some behaviour is not documented then this is classed as a bug. The documentation consists of The Exim Specification and two ancillary files: the experimental specification for features that might disappear and "NewStuff", which tracks very recent changes that might not have been fully integrated into the main specification. The Exim Specification is available in multiple formats, including online in HTML and in plain-text for fast searching. The document preparation system ensures that the plain-text format is highly usable.

Exim has been deployed in busy environments, often handling thousands of emails per hour efficiently. Exim is designed to deliver email immediately, without queueing. However, its queue processing performance is comparatively poor when queues are large (which happens rarely on typical low-traffic sites but can happen regularly on high-traffic sites).

Unlike qmail, Postfix, and ZMailer, Exim does not have a central queue manager (i.e. an equivalent of qmail-send, qmgr, or scheduler). There is thus no centralized load balancing, either of queue processing (leading to disproportionate amounts of time being spent on processing the same queue entries repeatedly) or of system-wide remote transport concurrency (leading to a "thundering herd problem" when multiple messages addressed to a single domain are submitted at once). In Philip Hazel's own words: [12]

"The bottom line is that Exim does not perform particularly well in environments where the queue regularly gets very large. It was never designed for this; deliveries from the queue were always intended to be 'exceptions' rather than the norm."

Historically, Exim used a peculiar version numbering scheme where the first decimal digit is updated only whenever the main documentation is fully up to date; until that time, changes were accumulated in the file NewStuff. For this reason, a 0.01 version change can signify important changes, not necessarily fully documented. [13] In 2005, changes to Exim's version numbering were on the table of discussion. [14]

In more recent times, the document preparation system for Exim has been overhauled and changes are much more likely to just go immediately into The Exim Specification. The 4.70 release just followed on naturally from 4.69 and the 4.6x releases had up-to-date documentation.

Philip Hazel retired from the University of Cambridge in 2007 and maintenance of Exim transitioned to a team of maintainers. Exim continues to be maintained actively, with frequent releases.

The Simple Mail Transfer Protocol (SMTP) is an internet standard communication protocol for electronic mail transmission. Mail servers and other message transfer agents use SMTP to send and receive mail messages. User-level email clients typically use SMTP only for sending messages to a mail server for relaying, and typically submit outgoing email to the mail server on port 587 or 465 per RFC 8314. For retrieving messages, IMAP and POP3 are standard, but proprietary servers also often implement proprietary protocols, e.g., Exchange ActiveSync.

The Maildir e-mail format is a common way of storing email messages in which each message is stored in a separate file with a unique name, and each mail folder is a file system directory. The local file system handles file locking as messages are added, moved and deleted. A major design goal of Maildir is to eliminate the need for program code to handle file locking and unlocking.

A mail exchanger record specifies the mail server responsible for accepting email messages on behalf of a domain name. It is a resource record in the Domain Name System (DNS). It is possible to configure several MX records, typically pointing to an array of mail servers for load balancing and redundancy.

qmail is a mail transfer agent (MTA) that runs on Unix. It was written, starting December 1995, by Daniel J. Bernstein as a more secure replacement for the popular Sendmail program. Originally license-free software, qmail's source code was later dedicated in the public domain by the author.

The GNU C Library, commonly known as glibc, is the GNU Project's implementation of the C standard library. Despite its name, it now also directly supports C++. It was started in the 1980s by the Free Software Foundation (FSF) for the GNU operating system.

Greylisting is a method of defending e-mail users against spam. A mail transfer agent (MTA) using greylisting will "temporarily reject" any email from a sender it does not recognize. If the mail is legitimate, the originating server will try again after a delay, and if sufficient time has elapsed, the email will be accepted. 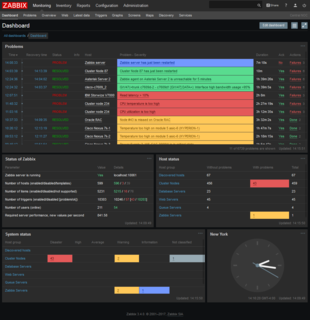 Zabbix is an open-source monitoring software tool for diverse IT components, including networks, servers, virtual machines (VMs) and cloud services. Zabbix provides monitoring metrics, among others network utilization, CPU load and disk space consumption. Zabbix monitoring configuration can be done using XML based templates which contain elements to monitor. The software monitors operations on Linux, Hewlett Packard Unix (HP-UX), Mac OS X, Solaris and other operating systems (OSes); however, Windows monitoring is only possible through agents. Zabbix can use MySQL, MariaDB, PostgreSQL, SQLite, Oracle or IBM DB2 to store data. Its backend is written in C and the web frontend is written in PHP. Zabbix offers several monitoring options:

Webmin is a web-based system configuration tool for Unix-like systems, although recent versions can also be installed and run on Microsoft Windows. Webmin allows the user to configure operating system internals, such as users, disk quotas, services or configuration files, as well as modify and control open-source apps, such as the Apache HTTP Server, PHP or MySQL.

Postfix is a free and open-source mail transfer agent (MTA) that routes and delivers electronic mail.

Technical variations of Linux distributions include support for different hardware devices and systems or software package configurations. Organisational differences may be motivated by historical reasons. Other criteria include security, including how quickly security upgrades are available; ease of package management; and number of packages available.

Variable envelope return path (VERP) is a technique used by some electronic mailing list software to enable automatic detection and removal of undeliverable e-mail addresses. It works by using a different return path for each recipient of a message.

The UW IMAP server was the reference server implementation of the IMAP protocol. It was developed at the University of Washington by Mark Crispin and others.

Smail-3 is a mail transfer agent (MTA) used on Unix-like operating systems. It is Free Software and is licensed under the GNU GPL. It aims to be a general and flexible mailer with extensive facilities for checking incoming e-mail and for routing between disparate networks. It is still in use on the Internet, but it has been mostly superseded by Exim and other more modern mail transfer agents.

Philip Hazel is a computer programmer best known for writing the Exim mail transport agent in 1995 and the PCRE regular expression library in 1997. He was employed by the University of Cambridge Computing Service until he retired at the end of September 2007. In 2009 Hazel wrote an autobiographical memoir about his computing career. 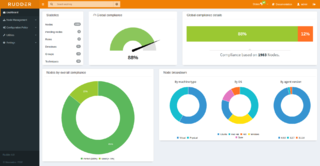 Rudder is an open source audit and configuration management utility to help automate system configuration across large IT infrastructures. Rudder relies on a lightweight local agent installed on each managed machine.