The Sweeney Mountains is a group of mountains of moderate height and about 64 km (40 mi) extent, located 48 km (30 mi) north of the Hauberg Mountains in Palmer Land, Antarctica.

Athos Range is the northernmost range in the Prince Charles Mountains of Mac. Robertson Land, Antarctica. The range consists of many individual mountains and nunataks that trend east-west for 40 miles (64 km) along the north side of Scylla Glacier. 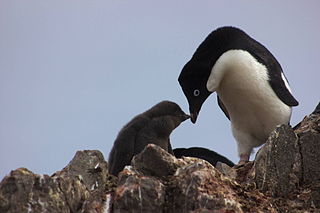 Clark Peninsula is a rocky peninsula, about 3 km (2 mi) long and wide, lying 5 km (3 mi) north-east of Australia's Casey Station at the north side of Newcomb Bay on the Budd Coast of Wilkes Land in Antarctica.

Mount Allport is a snow-free peak just west of Leslie Peak and about 5 nautical miles (9 km) south of Mount Cook of the Leckie Range. Plotted from ANARE air photos. Named by Antarctic Names Committee of Australia (ANCA) for B. Allport, radio officer at Mawson Station in 1964, a member of one of the survey parties which carried out a tellurometer traverse passing through the Leckie Range in 1965.

Burrage Dome is a mainly ice-covered dome, 840 metres (2,760 ft) high, standing 4 nautical miles (7 km) northeast of the summit of Mount Joyce, in the Prince Albert Mountains, Victoria Land. It was mapped by the United States Geological Survey from surveys and from U.S. Navy air photos, 1956–62, and named by the Advisory Committee on Antarctic Names for Roy E. Burrage, Jr., a construction mechanic with the South Pole Station winter party, 1966.

Vrana Dome is a prominent, rounded ice dome about 4 nautical miles (7 km) northeast of Statler Hills, at the east side of Amery Ice Shelf A survey station was established on the dome during the ANARE tellurometer traverse from Larsemann Hills to Reinbolt Hills in 1968. Named for A. Vrana, cosmic ray physicist at Mawson Station in 1968, who assisted in the survey.

Mount Peter is a large dome-shaped rock outcrop with a flat, sheer north face, about 2 nautical miles (3.7 km) east of Mount Bechervaise in the Athos Range, Prince Charles Mountains in Antarctica within the Australian Antarctic Territory. First visited in November 1955 by an ANARE party led by J.M. Bechervaise. Named by Antarctic Names Committee of Australia (ANCA) for Peter Crohn, geologist at Mawson Station, 1955–56.

Loewe Massif is a large rock massif in the eastern part of the Aramis Range of the Prince Charles Mountains, Antarctica. The surface of the massif is largely an undulating plateau from which Mount Loewe and the Medvecky Peaks rise. The plateau lies at an average elevation of 1,000 metres (3,300 ft) above sea level and 600 metres (2,000 ft) above the ice on its northern flank. It was discovered by an Australian National Antarctic Research Expeditions (ANARE) party led by W.G. Bewsher in 1956. The name of the massif derives from Mount Loewe, which was named for Fritz Loewe, a member of the ANARE reconnaissance party in the French expedition at Port Martin, Adélie Coast, in 1951.

McCann Glacier is a tributary glacier which drains the east slopes of Mount Stirling in the Bowers Mountains of Antarctica, and flows east between Mount Radspinner and Markinsenis Peak into Lillie Glacier. It was mapped by the United States Geological Survey from surveys and U.S. Navy air photos, 1960–64, and was named by the Advisory Committee on Antarctic Names for Chief Utilitiesman J.M. McCann, U.S. Navy, who was a member of the McMurdo Station winter party in 1962 and took part in summer support activities, 1963–65.

Thala Rock is an isolated, submerged rock lying off the Vestfold Hills, about 0.3 nautical miles (0.6 km) from the western point of Turner Island, bearing 250. The depth of water over the rock probably does not exceed 1 fathom. The rock was struck by the Thala Dan on January 16, 1959, when approaching Davis Anchorage with the ANARE relief expedition. Named after the Thala Dan. 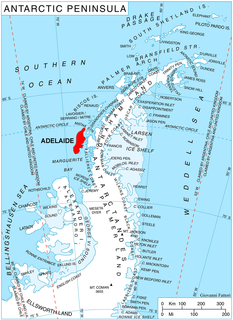 Horton Glacier is a glacier at the east side of Mount Barre and Mount Gaudry, flowing southeast from Adelaide Island into Ryder Bay, Antarctica. It was named by the UK Antarctic Place-Names Committee in 1977 for Colin P. Horton, a British Antarctic Survey builder at the nearby Rothera Station, 1976–77.

Venture Dome is a large, heavily crevassed ice dome about 30 nautical miles (60 km) south of Mount Twintop in Mac. Robertson Land. The feature had been seen by several parties traveling south from Mawson Station since 1957, but it had been avoided. In 1967, ANARE surveyor J. Manning selected a route through the crevasses and established a beaconed tellurometer station on it. So named by ANARE to indicate the risk taken in crossing the dome.