Thurston Island is an ice-covered, glacially dissected island, 215 km (134 mi) long, 90 km (56 mi) wide and 15,700 km2 (6,062 sq mi) in area, lying a short way off the northwest end of Ellsworth Land, Antarctica. It is the third-largest island of Antarctica, after Alexander Island and Berkner Island. 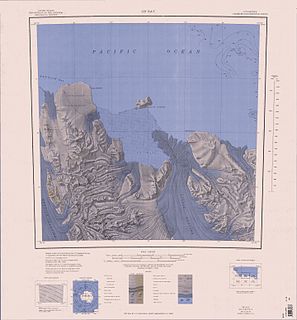 The Anare Mountains are a large group of mainly snow-covered peaks and ridges along the northern coast of Victoria Land, Antarctica. The group is bounded on the north and east by the Pacific Ocean, on the west by Lillie Glacier, and on the south by Robertson Glacier, Ebbe Glacier and Dennistoun Glacier. Kirkby Glacier, 20 miles (32 km) in length, drains the central Anare Mountains and flows northwest to the sea 3 miles (5 km) from Cape North, and just north of Arthurson Bluff, northern Victoria Land. The mountain range is situated on the Pennell Coast, a portion of Antarctica lying between Cape Williams and Cape Adare.

Lambert Glacier is a major glacier in East Antarctica. At about 50 miles (80 km) wide, over 250 miles (400 km) long, and about 2,500 m deep, it is the world's largest glacier. It drains 8% of the Antarctic ice sheet to the east and south of the Prince Charles Mountains and flows northward to the Amery Ice Shelf. It flows in part of Lambert Graben and exits the continent at Prydz Bay.

The Prince Charles Mountains are a major group of mountains in Mac. Robertson Land in Antarctica, including the Athos Range, the Porthos Range, and the Aramis Range. The highest peak is Mount Menzies, with a height of 3,228 m (10,591 ft). Other prominent peaks are Mount Izabelle and Mount Stinear. These mountains, together with other scattered peaks, form an arc about 420 km (260 mi) long, extending from the vicinity of Mount Starlight in the north to Goodspeed Nunataks in the south. 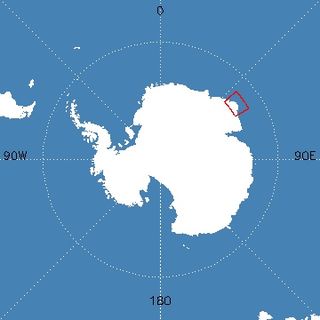 Kirkby Glacier is a glacier, 20 miles (30 km) in length. This glacier drains the central Anare Mountains of Antarctica and flows northwest to the sea 3 miles (5 km) from Cape North, and just north of Arthurson Bluff, northern Victoria Land. Richardson Bluff rises from its east side.

The Porthos Range is the second range south in the Prince Charles Mountains of Antarctica, extending for about 30 miles in an east-to-west direction between Scylla Glacier and Charybdis Glacier. First visited in December 1956 by the Australian National Antarctic Research Expeditions (ANARE) southern party under W.G. Bewsher (1956-57) and named after Porthos, a character in Alexandre Dumas, père's novel The Three Musketeers, the most popular book read on the southern journey.

Radok Lake is a meltwater lake about four miles (6.4 km) long and marked by a slender glacier tongue feeding into it from the west, lying three miles (4.8 km) south-west of Beaver Lake and 15 miles (24 km) south-east of the Aramis Range, Prince Charles Mountains. It was plotted by Australian National Antarctic Research Expeditions (ANARE) from air photos taken by the RAAF Antarctic Flight in 1956. The lake was named for Uwe Radok, Reader (head) of Meteorology Dept at the University of Melbourne, who greatly assisted Australian National Antarctic Research Expeditions (ANARE)'s glaciological program. With a depth of 362 metres (1,188 ft), Radok Lake is the deepest known lake on the Antarctic continent and the only known freshwater lake to host a floating ice tongue glacier. It is drained by three-mile-long (4.8 km) Pagodroma Gorge in to Beaver Lake. Radok Lake is an isothermal and non-stratified Lake, i.e. homogeneous water body.

The Aramis Range is the third range south in the Prince Charles Mountains, situated 11 miles southeast of the Porthos Range and extending for about 30 miles in a southwest–northeast direction. First visited in January 1957 by Australian National Antarctic Research Expeditions (ANARE) southern party led by W.G. Bewsher, who named it for a character in Alexandre Dumas' novel The Three Musketeers, the most popular book read on the southern journey.

The Masson Range is a high broken chain of mountains, consisting primarily of the North Masson, Central Masson and South Masson Ranges and the Trilling Peaks, forming a part of the Framnes Mountains. Having several peaks over 1,000 metres (3,300 ft), the range extends in a north–south direction for 15 nautical miles (28 km). It was discovered and charted by the British Australian and New Zealand Antarctic Research Expedition, 1929–31, under Douglas Mawson, and named for Professor Sir David Orme Masson, a member of the Advisory Committee for this expedition as well as the Australasian Antarctic Expedition, 1911–14, also under Mawson. The mountains were first visited by an Australian National Antarctic Research Expeditions party led by John Béchervaise in 1956.

McCarthy Nunatak is a small nunatak, the top of which is almost at the same level as the surrounding ice plateau, about 5 nautical miles (9 km) southeast of Depot Peak, Mac. Robertson Land, Antarctica. It was discovered from Australian National Antarctic Research Expeditions (ANARE) aircraft in 1970, and was named by the Antarctic Names Committee of Australia after I. McCarthy, a senior weather observer at Mawson Station in 1970, and a member of the ANARE Prince Charles Mountains survey party in 1971.

Soyuz Station is a Russian Antarctic research station, located on the shores of Beaver Lake, 260 km of Prydz Bay on the Lars Christensen Coast of the Mac Robertson Land in East Antarctica.

Wikimedia Commons has media related to Mac. Robertson Land .
This page is based on this Wikipedia article
Text is available under the CC BY-SA 4.0 license; additional terms may apply.
Images, videos and audio are available under their respective licenses.