FuG 224 Berlin A was a German airborne radar of World War II. It used rotating antennae and a PPI (Plan Position Indicator) display to allow its use for ground mapping.

Although only a handful of sets were constructed, they saw service on the Fw 200 Condor.

Influence of the British cavity magnetron

FuG 224 Berlin A, and the contemporary FuG 240 Berlin N1 or Nachtjagd air interception radar, [1] [2] both made use of captured examples of the British cavity magnetron in the H2S radar. A H2S-equipped Short Stirling bomber had crashed near Rotterdam on the night of 2 February 1943. [3] This led to H2S being given the German codename Rotterdam Gerät. Telefunken were instructed to examine the wreckage and build six replicas of it. This study also led to the development of the Naxos radar detector against it. [4]

Telefunken studied the design of the cavity magnetron and found it superior to the German split-anode magnetrons, particularly for its high power, high frequency performance. [5] Magnetrons based on this captured 9 cm wavelength design, the British CV64, were produced, the German LMS10 operating with a power of 10 kW. [6] Radar using them followed, but not quickly, the FuG 224 not appearing until early 1944. Few sets were built, around 50. [7] [8]

One difference with the German magnetron was the source of the magnetic field. British magnetrons used high quality permanent magnets. These were so difficult to obtain in Germany that they were recovered from crashed Allied aircraft. [9] The main German magnetron used an electromagnet instead. [10]

The antenna of the FuG 224 was unusual, a four element Dielektrische Strahler or polyrod (British) array. [6] [11] Capture of the magnetron had allowed the development of the Naxos radar detector as a countermeasure to it. This had been the first equipment to use a polyrod antenna. Each rod is a tapering end-fed rod made of a polystyrene dielectric. The four array elements were 3 λ long (27 cm) apiece, and spaced 1.5 λ (13.5 cm) apart. Using this array, rather than a parabolic dish, gave an extremely compact antenna, with only a shallow protrusion, which was well-suited for aircraft carriage, particularly when needed to rotate. The array could rotate at the high speed of 400 rpm, fast enough that the PPI display did not require the usual long persistence phosphor.

Magnetic deflection was used to produce the PPI display. The first design used two fixed sets of deflection yokes, at right angles to each other, and varying the drive signal to both of them by means of a goniometer. Later designs used the more conventional approach, where a single deflection yoke was physically rotated, in synchronism with the antenna's rotation. [12]

The rotating deflection yoke was an advantage for naval use, where multiple displays were provided for the same radar set. By using the established technology of synchros [lower-roman 1] and resolvers, stable slaved displays could be provided. [12]

FuMO 81 was a development of Berlin A for large surface warships. It was installed on the Tirpitz and Prinz Eugen. [3] 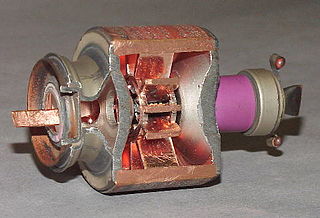 The cavity magnetron is a high-power vacuum tube used in early radar systems and currently in microwave ovens and linear particle accelerators. It generates microwaves using the interaction of a stream of electrons with a magnetic field while moving past a series of cavity resonators, which are small, open cavities in a metal block. Electrons pass by the cavities and cause microwaves to oscillate within, similar to the functioning of a whistle producing a tone when excited by an air stream blown past its opening. The resonant frequency of the arrangement is determined by the cavities' physical dimensions. Unlike other vacuum tubes, such as a klystron or a traveling-wave tube (TWT), the magnetron cannot function as an amplifier for increasing the intensity of an applied microwave signal; the magnetron serves solely as an oscillator, generating a microwave signal from direct current electricity supplied to the vacuum tube.

H2S was the first airborne, ground scanning radar system. It was developed for the Royal Air Force's Bomber Command during World War II to identify targets on the ground for night and all-weather bombing. This allowed attacks outside the range of the various radio navigation aids like Gee or Oboe, which were limited to about 350 kilometres (220 mi). It was also widely used as a general navigation system, allowing landmarks to be identified at long range.

The Lichtenstein radar was among the earliest airborne radars available to the Luftwaffe in World War II and the first one used exclusively for air interception. Developed by Telefunken, it was available in at least four major revisions, called FuG 202 Lichtenstein B/C, FuG 212 Lichtenstein C-1, FuG 220 Lichtenstein SN-2 and the very rarely used FuG 228 Lichtenstein SN-3.. The Lichtenstein series remained the only widely deployed airborne interception radar used by the Germans on their night fighters during the war — the competing FuG 216 through 218 Neptun mid-VHF band radar systems were meant as a potentially more versatile stop-gap system through 1944, until the microwave-based FuG 240 "Berlin" could be mass-produced; the Berlin system was still being tested when the war ended.

The low-UHF band Würzburg radar was the primary ground-based gun laying radar for the Wehrmacht's Luftwaffe and Heer during World War II. Initial development took place before the war and the apparatus entered service in 1940. Eventually, over 4,000 Würzburgs of various models were produced. It took its name from the city of Würzburg. 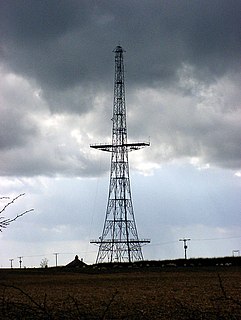 The history of radar started with experiments by Heinrich Hertz in the late 19th century that showed that radio waves were reflected by metallic objects. This possibility was suggested in James Clerk Maxwell's seminal work on electromagnetism. However, it was not until the early 20th century that systems able to use these principles were becoming widely available, and it was German inventor Christian Hülsmeyer who first used them to build a simple ship detection device intended to help avoid collisions in fog. True radar, such as the British Chain Home early warning system provided directional information to objects over short ranges, were developed over the next two decades. 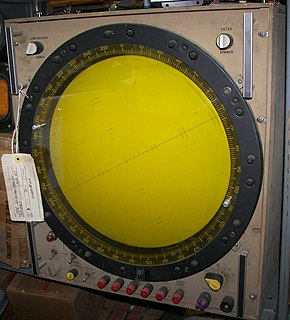 A radar display is an electronic device to present radar data to the operator. The radar system transmits pulses or continuous waves of electromagnetic radiation, a small portion of which backscatter off targets and return to the radar system. The receiver converts all received electromagnetic radiation into a continuous electronic analog signal of varying voltage that can be converted then to a screen display. 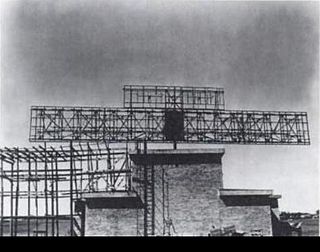 Jagdschloss, officially the FuG 404, was the designation of a German early warning and battle control radar developed just prior to the start of World War II. Although it was built in limited numbers, Jadgschloss is historically important as the first radar system to feature a plan position indicator display, or "PPI". In Germany this type of display was referred to as "Panorama". It is named for Jagdschloss, a hunting lodge.

The FuG 200 Hohentwiel was a low-UHF band frequency maritime patrol radar system of the Luftwaffe in World War II. It was developed by C. Lorenz AG of Berlin starting in 1938 under the code name "Hohentwiel", an extinct volcano in the region of Baden-Württemberg in southern Germany. The device had originally been entered into a design contest held by the Luftwaffe for the new FuMG 40L. When competitor Telefunken won that contract with its "Würzburg radar" in 1939, the device was shelved.

Neptun (Neptune) was the code name of a series of low-to-mid-VHF band airborne intercept radar devices developed by Germany in World War II and used as active targeting devices in several types of aircraft. They were usually combined with a "backwards warning device", indicated by the addition of the letters "V/R" Vorwärts/Rückwärts, meaning Forward/Backward). Working in the metre range, Neptun was meant as a stop-gap until scheduled SHF-band devices became available. 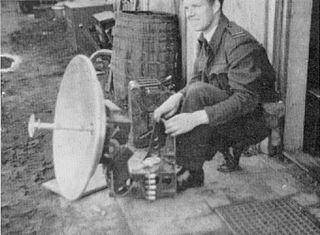 The FuG 240 "Berlin" was an airborne interception radar system operating at the "lowest end" of the SHF radio band, which the German Luftwaffe introduced at the very end of World War II. It was the first German radar to be based on the cavity magnetron, which eliminated the need for the large multiple dipole-based antenna arrays seen on earlier radars, thereby greatly increasing the performance of the night fighters. Introduced by Telefunken in April 1945, only about 25 units saw service.

The Type 271 was a surface search radar used by the Royal Navy and allies during World War II. The first widely used naval microwave-frequency system, it was equipped with an antenna small enough to allow it to be mounted on small ships like corvettes and frigates, while its improved resolution over earlier radars allowed it to pick up a surfaced U-boat at around 3 miles (4.8 km) and its periscope alone at 900 yards (820 m).

Berlin can refer to several German 9 cm wavelength microwave radars of World War II, developed after the capture of examples of the British cavity magnetron in the H2S radar. 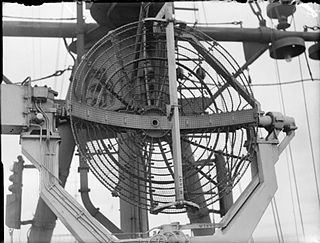 The Type 277 was a surface search and secondary aircraft early warning radar used by the Royal Navy and allies during World War II and the post-war era. It was a major update of the earlier Type 271 radar, offering much more power, better signal processing, new displays, and new antennas with greatly improved performance and much simpler mounting requirements. It allowed a radar with performance formerly found only on cruisers and battleships to be fitted even to the smallest corvettes. It began to replace the 271 in 1943 and was widespread by the end of the year.

Radar, Air-to-Surface Vessel, Mark III, or ASV Mk. III for short, was a surface search radar system used by RAF Coastal Command during World War II. It was a slightly modified version of the H2S radar used by RAF Bomber Command, with minor changes to the antenna to make it more useful for the anti-submarine role. It was Coastal Command's primary radar from the spring of 1943 until the end of the war. Several improved versions were introduced, notably the ASV Mark VI, which replaced most Mk. IIIs from 1944 and ASV Mark VII radar, which saw only limited use until the post-war era.