Gary McLinton Downs, Jr. (born June 6, 1972 in New Bern, North Carolina) is currently the Recruiting Coordinator and running backs coach at East Tennessee State University. [1] Gary is a former American football running back in the National Football League for the New York Giants, the Denver Broncos, and the Atlanta Falcons. He was also an assistant coach for NFL Europa's Amsterdam Admirals. [1]

Downs played college football at North Carolina State University and was selected in the third round of the 1994 NFL Draft by the Giants. He played in 69 games over six NFL seasons from 1994 to 2000. He rushed for 149 yards and caught nine passes for 66 yards. [1] Gary Downs’ spouse is Tanya Shorter Downs from Cary N.C. They have three children, Kameron, Josh, and Caleb Downs. Kameron played women's soccer for Kennesaw State University, Josh is currently a wide receiver for North Carolina, and Caleb is a highly sought-after football recruit in the class of 2023. 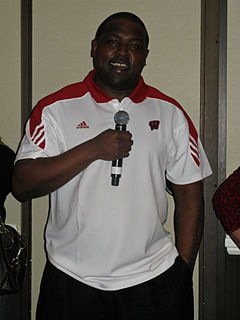 Ronald Dayne is a former professional American football running back who played in the National Football League (NFL) for eight seasons. Dayne played college football for the University of Wisconsin and won the 1999 Heisman Trophy. He was a first round pick of the New York Giants in the 2000 NFL Draft and also played for the Denver Broncos and Houston Texans.

Natrone Jermaine Means is a former professional American football running back who played for the San Diego Chargers, Jacksonville Jaguars, and Carolina Panthers of the National Football League (NFL) from 1993 to 2000. He was selected by the Chargers in the second round of the 1993 NFL Draft. In 1994, he was selected to the Pro Bowl during San Diego's Super Bowl season. He is a member of the San Diego Chargers 50th Anniversary Team. Means was nicknamed Natrone "Refried" Means and, later, "Natrone Means Business" by ESPN's Chris Berman, He is currently an assistant coach at North Carolina.

Daniel Edward Reeves was an American football running back and coach in the National Football League (NFL). During his 38 years in the NFL, Reeves participated in nine Super Bowls, the third most for an individual. He was a head coach for 23 seasons, a position he held with the Denver Broncos from 1981 to 1992, the New York Giants from 1993 to 1996, and the Atlanta Falcons from 1997 to 2003. As a player, he spent the entirety of his eight-season career with the Dallas Cowboys, who signed him as an undrafted free agent in 1965. 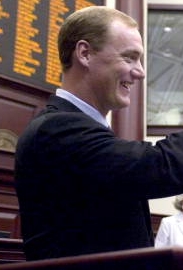 George Washington Rogers Jr. is a former American college and professional football player who was a running back in the National Football League (NFL) for seven seasons during the 1980s. Rogers played college football for the University of South Carolina, earned All-America honors, and won the 1980 Heisman Trophy. He was the first overall pick in the 1981 NFL Draft, and he played professionally for the New Orleans Saints and Washington Redskins of the NFL. As a professional, Rogers rushed for over 7,000 yards.

Dewayne Neron Washington is a former American football cornerback in the National Football League. He played for the Minnesota Vikings, the Pittsburgh Steelers, the Jacksonville Jaguars, and the Kansas City Chiefs. He was a first-round pick in the 1994 NFL Draft from North Carolina State University. He is currently the head football coach at Heritage High School in Wake Forest, North Carolina. 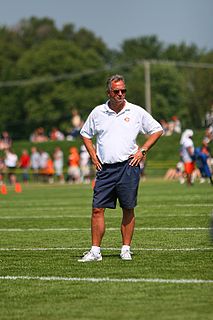 John R. Settle, is currently the running backs coach for the Kentucky Wildcats. He is also a former professional American football player. A 5'9", 207-lb. undrafted running back from Appalachian State University, Settle attended Rockingham County High School where he still holds both the single game, single season, and career rushing records. He played for the Atlanta Falcons from 1987 to 1990 and the Washington Redskins his next 2 seasons where he won a super bowl. During the 1988 NFL season, he was selected the Pro Bowl after rushing for a career-high 1,024 yards and 7 touchdowns. He was the first undrafted running back in NFL history to rush for over 1,000 yards in a season. Settle is the running backs coach for the University of Kentucky. Settle was a founding member of the Pi Nu chapter of Alpha Phi Alpha fraternity.

Eric Studesville is an American football coach who is the running backs coach for the Miami Dolphins of the National Football League (NFL). Studesville is known as the former run game coordinator for the Buffalo Bills and interim head coach of the Denver Broncos, a position he held for four weeks in December 2010. He replaced Josh McDaniels after 12 games in the 2010 NFL Season, after which he resumed his primary role as running backs coach. He was the first African American head coach in Broncos history, albeit on an interim basis.

Joshua Tyler Freeman is a former American football quarterback. He played college football at Kansas State University, and was drafted by the Tampa Bay Buccaneers in the first round of the 2009 NFL Draft. Freeman became the starter for Tampa Bay in his rookie year and went on to break numerous franchise passing records. However, he was released partway through his fifth year with the team.

Vernon Turner is a former American college and professional football player who was a running back, wide receiver and return specialist in the National Football League (NFL) and NFL Europe League (NFLE) for eight seasons during the 1990s. Turner played college football for Carson–Newman College, and then professionally for the Buffalo Bills, Los Angeles Rams, Detroit Lions and Tampa Bay Buccaneers of the NFL. He concluded his career with the Frankfurt Galaxy and Scottish Claymores in NFLE. 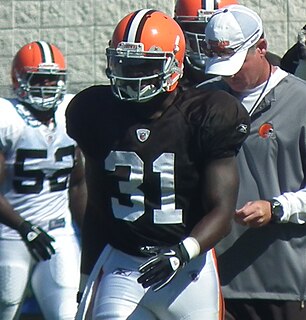 Montario Hardesty, is an American football coach and former player. He is currently the running backs coach at the University of South Carolina. Hardesty played college football at the University of Tennessee, where he amassed fewer than 400 yards in each of his first four seasons before breaking out with 1345 yards and 13 rushing touchdowns in 2009. In 2015, Hardesty became the running backs coach and special teams coordinator for Norfolk State University. He was the wide receivers coach for the Charlotte 49ers football program from 2019-2020.

James Augustine Skipper is a former American football coach who was best known for being the running backs coach for the Carolina Panthers of the National Football League (NFL) for 15 years. He was also the offensive coordinator for the New York Giants for three years, starting in 1997.

Everett Rowe Withers is an American football coach and former player. He currently serves as the Chief of Staff to Temple Owls football head coach Stan Drayton. He is formerly served as the defensive coordinator at FIU, and previously served defensive backs coach for the New York Giants and as the head coach for the Texas State Bobcats. Withers served as head football coach at University of North Carolina at Chapel Hill during the 2011 season as well as James Madison University in the 2014 and 2015 seasons.

Sean Ryan is an American football coach who is the quarterbacks coach for the Carolina Panthers of the National Football League (NFL). He previously served as an assistant coach for the Detroit Lions, Houston Texans and New York Giants.

Javon Leake is an American football running back and return specialist who is a free agent. He played college football at Maryland and signed as an undrafted free agent with the New York Giants in 2020. He has also been a member of the Washington Football Team.