Geometriae Dedicata is a mathematical journal, founded in 1972, concentrating on geometry and its relationship to topology, group theory and the theory of dynamical systems. It was created on the initiative of Hans Freudenthal in Utrecht, the Netherlands. [1] It is published by Springer Netherlands. The Editors-in-Chief are John R. Parker and Jean-Marc Schlenker. [2]

Lincos is a constructed language first described in 1960 by Dr. Hans Freudenthal in his book Lincos: Design of a Language for Cosmic Intercourse, Part 1. It is a language designed to be understandable by any possible intelligent extraterrestrial life form, for use in interstellar radio transmissions. Freudenthal considered that such a language should be easily understood by beings not acquainted with any Earthling syntax or language. Lincos was designed to be capable of encapsulating "the whole bulk of our knowledge." 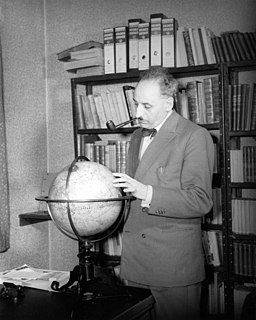 Hans Freudenthal was a Jewish-German-born Dutch mathematician. He made substantial contributions to algebraic topology and also took an interest in literature, philosophy, history and mathematics education.

Astrolinguistics is a field of linguistics connected with the search for extraterrestrial intelligence (SETI). 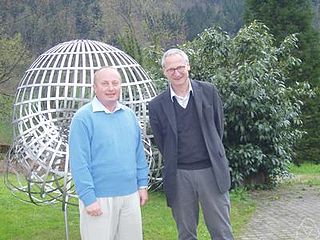 Rostislav Ivanovich Grigorchuk is a Soviet and Russian mathematician working in the area of group theory. He holds the rank of Distinguished Professor in the Mathematics Department of Texas A&M University. Grigorchuk is particularly well known for having constructed, in a 1984 paper, the first example of a finitely generated group of intermediate growth, thus answering an important problem posed by John Milnor in 1968. This group is now known as the Grigorchuk group and it is one of the important objects studied in geometric group theory, particularly in the study of branch groups, automata groups and iterated monodromy groups. 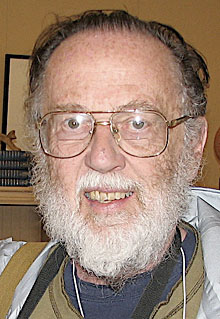 James W. Cannon is an American mathematician working in the areas of low-dimensional topology and geometric group theory. He was an Orson Pratt Professor of Mathematics at Brigham Young University. 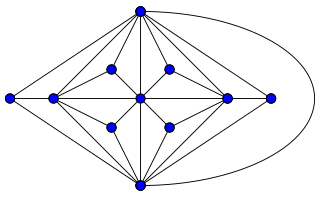 In the mathematical field of graph theory, the Goldner–Harary graph is a simple undirected graph with 11 vertices and 27 edges. It is named after A. Goldner and Frank Harary, who proved in 1975 that it was the smallest non-Hamiltonian maximal planar graph. The same graph had already been given as an example of a non-Hamiltonian simplicial polyhedron by Branko Grünbaum in 1967.

Thomas Zaslavsky is an American mathematician specializing in combinatorics.

Luis Radford is professor at the School of Education Sciences at Laurentian University in Sudbury, Ontario, Canada. His research interests cover both theoretical and practical aspects of mathematics thinking, teaching, and learning. His current research draws on Lev Vygotsky's historical-cultural school of thought, as well as Evald Ilyenkov's epistemology, in a conceptual framework influenced by Emmanuel Levinas and Mikhail Bakhtin, leading to a non-utilitarian and a non-instrumentalist conception of the classroom and education.

In mathematics, the Freudenthal spectral theorem is a result in Riesz space theory proved by Hans Freudenthal in 1936. It roughly states that any element dominated by a positive element in a Riesz space with the principal projection property can in a sense be approximated uniformly by simple functions. 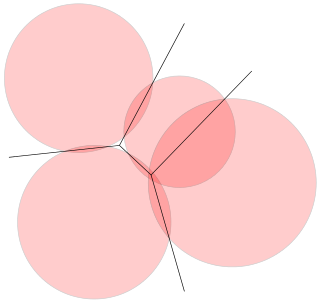 In computational geometry, a power diagram, also called a Laguerre–Voronoi diagram, Dirichlet cell complex, radical Voronoi tesselation or a sectional Dirichlet tesselation, is a partition of the Euclidean plane into polygonal cells defined from a set of circles. The cell for a given circle C consists of all the points for which the power distance to C is smaller than the power distance to the other circles. The power diagram is a form of generalized Voronoi diagram, and coincides with the Voronoi diagram of the circle centers in the case that all the circles have equal radii.

Dănuţ Marcu is a Romanian mathematician and computer scientist, who received his Ph.D. from the University of Bucharest in 1981. He claimed to have authored more than 400 scientific papers. 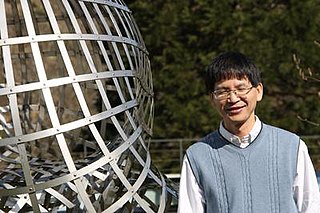 Pham Huu Tiep is a Vietnamese American mathematician specializing in group theory and Lie theory. He is currently a Joshua Barlaz Distinguished Professor of Mathematics at Rutgers University.

Ascher Otto Wagner was an Austrian and British mathematician, specializing in the theory of finite groups and finite projective planes. He is known for the Dembowski–Wagner theorem.