The Patriots have appeared in the NCAA tournament six times. Their combined record is 5–6.

The Patriots have appeared in the National Invitation Tournament (NIT) four times. Their combined record is 3–4.

The Patriots have appeared in the College Basketball Invitational (CBI) two times. Their combined record is 4–3.

The Patriots have appeared in the CollegeInsider.com Postseason Tournament (CIT) one time. Their record is 0–1. 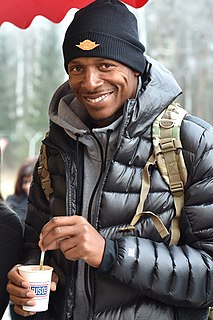 Andrew Tyler Hansbrough is an American professional basketball player who last played for the Sichuan Blue Whales of the Chinese Basketball Association (CBA).

The George Mason Patriots are the athletic teams of George Mason University (GMU) of Fairfax, Virginia. The Patriots compete in Division I of the National Collegiate Athletic Association (NCAA) as members of the Atlantic 10 Conference for most sports.

Daniel Hiram Gibson is an American former professional basketball player who played seven seasons in the National Basketball Association (NBA) for the Cleveland Cavaliers. He was selected by the Cavaliers in the second round of the 2006 NBA draft. 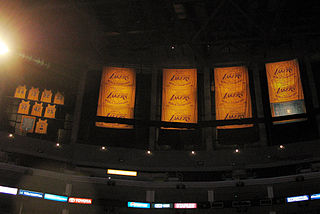 George Mason Patriots men's basketball program dates to 1966. Basketball and athletics as a whole have contributed significantly to George Mason's popularity and success. The Patriots are the mascot and logo of George Mason University. The Patriots home court for both the men and women is at the EagleBank Arena, which is in Fairfax Virginia. The Patriots compete in the Atlantic 10 Conference. Until 2012–13, they competed in the Colonial Athletic Association, better known as the CAA. Both conferences are part of NCAA Division I sports. The men's team is coached by Dave Paulsen. The women's team is coached by Nyla Milleson.

The 2002–03 NBA season was the 35th season for the Phoenix Suns in the National Basketball Association. Frank Johnson returned as head coach, posting eight additional wins from the previous season to finish at 44–38. The Suns returned to the playoffs after snapping a streak of 13 seasons in a row the year before, a franchise record, and were supplanted by the play of rookie high school draft pick Amar'e Stoudemire. America West Arena hosted Suns home games.

The Butler Bulldogs women's basketball team represents Butler University in Indianapolis, Indiana, United States. The school's team currently competes in the Big East after moving from the Atlantic 10 following the 2012–2013 season. The Bulldogs had competed in the Horizon since joining Division I competition in the 1986-1987 season. The women’s basketball team began competing in the IAIAW in 1975-1976 under coach Xandra Hamilton and had their first winning season two years later, obtaining a 9-5 record under coach Linda Mason. The Bulldogs are currently coached by Kurt Godlevske.

Joseph Malcolm Harris is an American professional basketball player for the Brooklyn Nets of the National Basketball Association (NBA). He played college basketball for the University of Virginia before being selected with the 33rd overall pick in the 2014 NBA draft by the Cleveland Cavaliers.

The 2014–15 Eastern Michigan Eagles men's basketball team represented Eastern Michigan University during the 2014–15 NCAA Division I men's basketball season. The Eagles, led by fourth year head coach Rob Murphy, played their home games at the Eastern Michigan University Convocation Center, as members of the West Division of the Mid-American Conference. They finished the season 21–14, 8–10 in MAC play to finish in a tie for fourth place in the West Division. They advanced to the quarterfinals of the MAC Tournament where they lost to Toledo. They were invited to the College Basketball Invitational where they lost in the first round to Louisiana–Monroe.

Katie Lou Samuelson is an American professional basketball player for the Seattle Storm of the Women's National Basketball Association (WNBA). She played college basketball for the UConn Huskies.

Curtis Reynard McCants is an American former professional basketball player. A 6-foot point guard, he played college basketball at George Mason for 3 years, being named CAA Rookie of the Year in 1994 and first team All-Conference in 1996 before leaving the program after a fight with a teammate. He finished his college career at Cal State Bakersfield in the NCAA Division II and started his professional career in 1997 playing in Israel. In 2001 he was the top scorer of the LNB Pro A in France. In 10 years of pro career he played in several countries in Europe and South America. McCants has a daughter, Asia McCants, who played Division 1 basketball at Howard University.