After studying physics at the Graz University of Technology (diploma thesis 1993), he continued with a PhD in mathematics at the University of Missouri. The title of his thesis supervised by Fritz Gesztesy was Spectral Theory for Jacobi Operators (1995). After a postdoctoral position at the Rheinisch-Westfälischen Technische Hochschule Aachen (1996/97), he moved to Vienna, where he received his Habilitation at the University of Vienna in May 1998. Since then he has been a professor of mathematics there.

His most important contributions are to the fields of Sturm–Liouville theory, Jacobi operators and the Toda lattice. He also works in biomathematics, in particular in the novel area of breath gas analysis, and has written a successful undergraduate textbook (Mathematics for Computer Science, in German) with his wife. 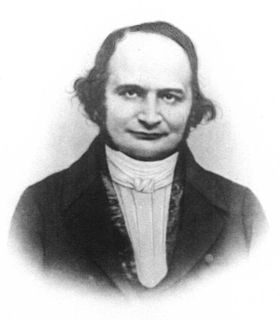 Carl Gustav Jacob Jacobi was a German mathematician who made fundamental contributions to elliptic functions, dynamics, differential equations, determinants, and number theory. His name is occasionally written as Carolus Gustavus Iacobus Iacobi in his Latin books, and his first name is sometimes given as Karl.

In mathematics and physics, the inverse scattering problem is the problem of determining characteristics of an object, based on data of how it scatters incoming radiation or particles. It is the inverse problem to the direct scattering problem, which is to determine how radiation or particles are scattered based on the properties of the scatterer.

In mathematics, and in particular in the theory of solitons, the Dym equation (HD) is the third-order partial differential equation

In mathematics, the composition operator with symbol is a linear operator defined by the rule

The Toda lattice, introduced by Morikazu Toda (1967), is a simple model for a one-dimensional crystal in solid state physics. It is given by a chain of particles with nearest neighbor interaction described the Hamiltonian

Graduate Studies in Mathematics (GSM) is a series of graduate-level textbooks in mathematics published by the American Mathematical Society (AMS). These books elaborate on several theories from notable personas, such as Martin Schechter and Terence Tao, in the mathematical industry. The books in this series are published only in hardcover.

Michio Jimbo is a Japanese mathematician working in mathematical physics and is a professor of mathematics at Rikkyo University. He is a grandson of the linguist Kaku Jimbo. 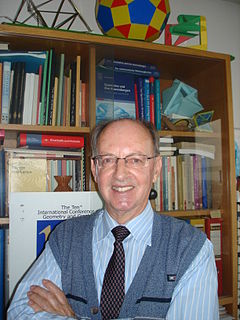 Hellmuth Stachel is an Austrian mathematician, a Professor of Geometry at the Technical University of Vienna, who is known due to his contributions to geometry, kinematics and computer-aided design.

In mathematics, a quantum affine algebra is a Hopf algebra that is a q-deformation of the universal enveloping algebra of an affine Lie algebra. They were introduced independently by Drinfeld (1985) and Jimbo (1985) as a special case of their general construction of a quantum group from a Cartan matrix. One of their principal applications has been to the theory of solvable lattice models in quantum statistical mechanics, where the Yang–Baxter equation occurs with a spectral parameter. Combinatorial aspects of the representation theory of quantum affine algebras can be described simply using crystal bases, which correspond to the degenerate case when the deformation parameter q vanishes and the Hamiltonian of the associated lattice model can be explicitly diagonalized.

Friedrich "Fritz" Gesztesy is a well-known Austrian-American mathematical physicist and Professor of Mathematics at Baylor University, known for his important contributions in spectral theory, functional analysis, nonrelativistic quantum mechanics, ordinary and partial differential operators, and completely integrable systems. He has authored more than 270 publications on mathematics and physics.

A Jacobi operator, also known as Jacobi matrix, is a symmetric linear operator acting on sequences which is given by an infinite tridiagonal matrix. It is commonly used to specify systems of orthonormal polynomials over a finite, positive Borel measure. This operator is named after Carl Gustav Jacob Jacobi.

Shmuel Agmon is an Israeli mathematician. He is known for his work in analysis and partial differential equations.

In mathematics, the Burchnall–Chaundy theory of commuting linear ordinary differential operators was introduced by Burchnall and Chaundy.

Tetsuji Miwa is a Japanese mathematician, specializing in mathematical physics.