Gone Too Far! is a 2013 British Nigerian comedy-drama film, directed by Destiny Ekaragha. It stars OC Ukeje, Adelayo Adedayo, Shanika Warren-Markland and Malachi Kirby. [2] [3] It was released in Nigeria on 16 January 2015. [4]

Shanika Warren-Markland is a British actress. Markland is known for her roles in More Than Love and 4.3.2.1.

Adelayo Adedayo is an English actress. Her first television appearance was in The Bill, and she made her film debut in Sket. She later starred as the main character, Viva Bennett, in Some Girls, which aired on BBC Three. Since 2017, she has starred in the ITV2 sitcom Timewasters as Lauren.

Awakening is a 2013 Nigerian dark thriller film directed by James Omokwe and Ethan Okwara and starring OC Ukeje, Kehinde Bankole, Femi Brainard and Bryan Okwara. It was nominated for the category AMAA Achievement In Visual Effects at the 9th Africa Movie Academy Awards. The film was the highest rated film on Nollywood Reinvented at the time of release, with a score of 81%.

...When Love Happens is a 2014 Nigerian romantic comedy film co-produced and directed by Seyi Babatope. It stars Weruche Opia, OC Ukeje, Beverly Naya, Oreka Godis, Gideon Okeke, Bukky Wright, Desmond Elliot, Wale Ojo, Keppy Ekpenyong and Shafy Bello. The film tells the story of a successful events planner, Oluwanimoduroti (Mo) Bankole-Smith, whose job is to help other people plan their weddings, but finds it hard to get into a relationship. 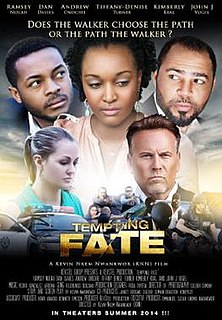 Tempting Fate is a 2015 Nigerian American film written, directed and produced by Kevin Nwankwor. The film stars Ramsey Nouah, Dan Davies and John Vogel. It first premiered at the 2015 Pan African Film Festival and also at the USA Indie Fest.

Tonye Garrick, simply known as Tonye is a British-born Nigerian singer and songwriter. Her accapella song titled "What About Us?" was used at the Nigerian Youth Presidential debate in 2011. Born in England, Tonye was raised in France, Nigeria and the United States of America where she dropped her job as a business consultant to pursue a career in music in 2013. In 2015, she released a marriage-themed single title "Ari Belema" which got her nominated in the "Most Promising Act" category at the 2015 Nigeria Entertainment Awards. She is signed to Made Men Music Group since April 2016.

Francis Odega is a Nigerian comic actor best known for a hilarious video clip of him which went viral and circulated the Internet. It brought him to limelight as he secured endorsement deals and recognition from foreign celebrities, an example is 50 cent, who Odega claimed followed him on Instagram

Road To Yesterday is a 2015 Nigerian road romantic drama film directed by Ishaya Bako. It stars Genevieve Nnaji and Oris Erhuero in lead roles, with Majid Michel and Chioma 'Chigul' Omeruah in supporting roles. The film, which is co-produced by Genevieve Nnaji, is the actress' first effort as a producer.

Nigerian recording artist Runtown has released one studio album, seventeen singles and ten music videos. His debut single was released in 2007 as an upcoming artist. He shot to limelight in 2014 upon the release of "Gallardo", a song which features vocals from Davido and was released as the first single off his debut studio album Ghetto University. Gallardo went on to win "Best Collaboration of the Year" at the 2014 edition of the Nigeria Entertainment Awards. On 23 November 2015, Runtown released his debut studio album titled Ghetto University via MTN Music Plus through Eric Many Entertainment. The album generated over ₦35million on the music portal thus earning him a spot in the list of "Top 5 Most Streamed Artist".

Hilda Dokubo is a Nigerian award-winning film actress, activist and youth advocate who once served as special adviser on youth affairs to Peter Odili, a former governor of Rivers State.

Makida Moka is an Egyptian-born Nigerian actress and model. She starred as Monye in the 2014 TV series Gidi Up, and played a rape victim in Emem Isong's 2015 drama film Code of Silence. As a model she is a brand ambassador for Frankie and Co.