The Hamilton Alerts were a Canadian football-rugby union team based in Hamilton, Ontario that played in the Ontario Rugby Football Union from 1911 to 1912. The club won the 4th Grey Cup in 1912, becoming the first ever team from Hamilton to win the Grey Cup and the first team from the ORFU to win the Cup. 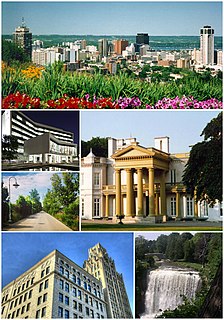 Hamilton is a port city in the Canadian province of Ontario. An industrialized city in the Golden Horseshoe at the west end of Lake Ontario, Hamilton has a population of 536,917, and a metropolitan population of 747,545. The city is located about 60 km southwest of Toronto, with which the Greater Toronto and Hamilton Area (GTHA) is formed.

While the club won the Grey Cup in 1912, but not without controversy. The Alerts were suspended by the Ontario Rugby Football Union on November 23, 1912, one week before the Grey Cup game, after questioning the Union's authority. After the Toronto Rowing and Athletic Club protested a questionable penalty call in a Hamilton Alert's victory, the ORFU ordered the Alerts to replay the game on November 23. The Alerts lost the rematch 39–7, mainly because they used backups while the main squad played the Hamilton Tigers in a regularly scheduled match – which the Alerts won 12–8. The Alerts proceeded to defeat the Toronto Argonauts in the Grey Cup the following week.

The Alerts tried to rejoin the ORFU with a formal request on September 6, 1913, but were denied reinstatement. This, along with the previous season's indiscretion, led many players to join the Hamilton Tigers of the Interprovincial Rugby Football Union in time for the 1913 season. What was left of the Alerts operated separately from any union for several years until they disbanded altogether.

In 1940 several ORFU teams disbanded during the war, and several more were quickly thrown together to ensure a season was played. The team from Hamilton was nicknamed the "Alerts" by the press, but was not a descendant or continuation of the original team: they won 1 of 5 games in 1940.

In 1941, Hamilton's place in the ORFU would be filled by the Hamilton Wildcats, who played through 1949 before merging with the Tigers to form the modern-day Hamilton Tiger-Cats.

The Ottawa Rough Riders were a Canadian Football League team based in Ottawa, Ontario, founded in 1876. Formerly one of the oldest and longest lived professional sports teams in North America, the Rough Riders won the Grey Cup championship nine times. Their most dominant era was the 1960s and 1970s, a period in which they won five Grey Cups. The team's fortunes waned in the 1980s and 1990s and they ultimately ceased operations following the 1996 season. Five years later, a new CFL team known as the Ottawa Renegades was founded, though they suspended operations in 2006. The Ottawa Redblacks, who own the Rough Riders intellectual properties, joined the league in 2014.

The only two-game total point series in Grey Cup history was played between the Ottawa Rough Riders and the Toronto Balmy Beach Beachers.

Ross B. Craig was a star football player in Canadian football in the early 20th century. He played for several intermediate teams before playing for the Hamilton Alerts for two years where he won a Grey Cup championship in 1912. The following season, he joined the Interprovincial Rugby Football Union's Hamilton Tigers where he won another Grey Cup in 1913. He would finish his career with the Tigers in 1920, after playing five seasons with Hamilton.