Winfield played college football at the University of North Carolina at Chapel Hill from 1982 to 1985. He left as the all-time Tar Heel career leader in receptions, with 107.

On February 21, 2013 the Canadian Football Hall of Fame announced that Winfield would be inducted as a player at a ceremony in Edmonton in September, 2013.

David Mark Winfield is an American former Major League Baseball (MLB) right fielder. He is the special assistant to the executive director of the Major League Baseball Players Association. Over his 22-year career, he played for six teams: the San Diego Padres, New York Yankees, California Angels, Toronto Blue Jays, Minnesota Twins, and Cleveland Indians. He had the winning hit in the 1992 World Series with the Blue Jays over the Atlanta Braves.

Earl Faison was an American football player who played in the American Football League (AFL) between 1960 and 1966.

Ernest Ladd, nicknamed "The Big Cat", was an American professional football player and professional wrestler. A standout athlete in high school, Ladd attended Grambling State University on a basketball scholarship before being drafted in 1961 by the San Diego Chargers of the American Football League (AFL). Ladd found success in the AFL as one of the largest players in professional football history at 6′9″ and 290 pounds. 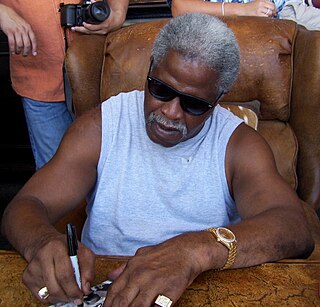 Earl Christian Campbell, nicknamed The Tyler Rose, is an American professional football player who was a running back in the National Football League (NFL) for the Houston Oilers and New Orleans Saints. Known for his aggressive, punishing running style and ability to break tackles, Campbell gained recognition as one of the best power running backs in NFL history.

The 1978 NFL draft was the procedure by which National Football League teams selected amateur college football players. It is officially known as the NFL Annual Player Selection Meeting. The draft was held May 2–3, 1978, at the Roosevelt Hotel in New York City, New York. The league also held a supplemental draft after the regular draft and before the regular season.

Arthur Daniel Kahler Sr. was an American college football and basketball player and coach. He was listed in "Ripley's Believe It Or Not" as only person to coach at two different major colleges at the same time—head basketball coach at Brown University and football coach at Dickinson College in Carlisle, Pennsylvania. He later became a coach and athletic director at Southwestern College in Winfield, Kansas. 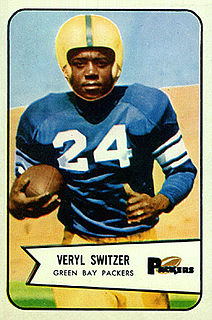 Veryl Switzer is a former halfback in the National Football League who played 24 games for the Green Bay Packers before serving in the United States Air Force for two years, playing professional football in Canada, and becoming an administrator at his alma mater Kansas State where he is a hall of famer. 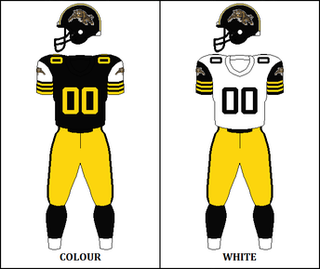 The 1988 Hamilton Tiger-Cats season was the 31st season for the team in the Canadian Football League and their 39th overall. The Tiger-Cats finished in 3rd place in the East Division with a 9–9 record and lost the East Semi-Final to the Winnipeg Blue Bombers. Earl Winfield tied Steve Stapler's record for most touchdowns in one season with 13. It would be Stapler's final season with the Tiger-Cats, and he finished ranked fourth all-time in franchise history in touchdowns. Paul Osbaldiston would set a franchise record for the most converts in one season with 49 made.

Larry Haylor is a Canadian retired football coach. He coached the Western Ontario Mustangs from 1984 to 2006. He was CIS football's winningest head coach until he was surpassed in 2011 by Brian Towriss, and he retired with a career record of 178-43-4 as head coach. Haylor was inducted into the Canadian Football Hall of Fame in 2014. He also was named coach of the year in 1990 and 1998, and won the Vanier Cup championship in 1989 and 1994. Haylor was born in Prince Albert, Saskatchewan and attended the University of Saskatchewan where he played on the football team. He was also an assistant coach there from 1971 to 1973. His son, Jordan Haylor, is an accomplished teacher who has been teaching at Parkside Collegiate Institute for 3 years.