Heather Rae is an American film and television producer and director. She has worked on documentary and narrative film projects, and is best known for Frozen River , Trudell , and Tallulah . [1] [2]

In 1999, Rae married Russell Friedenberg, the American director and screenwriter. They have three children; her daughter is actress Johnny Sequoyah. [4]

In 2000, she co-produced Backroads directed by Shirley Cheechoo, which premiered at Sundance Film Festival that year.

Rae has worked as a producer for more than 20 years,[ when? ] being recognized as one of Variety's Ten Producers to Watch in 2008, and receiving the Piaget Producers Award and the Cinereach Producers Award. [6]

In 2005, Trudell was released, the culmination of more than a decade of Rae’s work as a filmmaker and activist.[ citation needed ] It has played in more than 100 film festivals worldwide. [7] Trudell received the Best Documentary Feature at the 30th Annual American Indian Film Festival and a Special Jury Prize for Best Documentary at the Seattle International Film Festival.[ when? ] In 2006, Trudell was nationally broadcast on PBS in the documentary series Independent Lens. [7]

In 2008, she was recognized as one of Variety 's Ten Producers to Watch. [10] Frozen River (2008) received seven nominations and won two Independent Spirit Awards, including Rae winning the Piaget Producers Award. [11] It won the Grand Jury Prize at the Sundance Film Festival, and received two Academy Award nominations for the Best Actress (Melissa Leo) and the Best Original Screenplay (Courtney Hunt). [12] It was nominated for five Gotham Awards and won the Best Feature and the Breakthrough Actor awards in The 18th Annual Gotham Independent Film Awards. [13] [14]

In 2009, the Independent Spirit Awards gave Rae the Piaget Producers Award for Frozen River and Ibid. [15]

She established a production center in Boise where independent filmmakers such as Gregory Bayne, Randy Redroad and Blackhorse Lowe worked.[ when? ] It produced four feature films before being shuttered. Rae is a current and founding board member of the Sun Valley Film Festival. [19]

After leaving Sundance, Rae worked for one year as senior vice president of production for Winter Films. [20] From 2012 to 2015, Rae served as an artist trustee for the Sundance Institute's Board of Trustees. [21]

In 2016, Tallulah, starring Elliot Page and Alison Janney, written and directed by Sian Heder, premiered at the 2016 Sundance Film Festival and is a Netflix Original Film. [23]

Rae has worked with filmmakers in several countries, including the Sami and British Film Institutes in Europe, [27] New Zealand's Script to Screen and Power of Inclusion Summit, [28] and in Egypt with Film Independent's Global Media Makers partnership with the Cairo International Film Festival. [29]

Sian Heder is an American television writer, television producer, and filmmaker who is best known for writing and directing the films Tallulah and CODA. CODA earned Heder an Academy Award for Best Adapted Screenplay, while the film won for Best Picture. She also won several other awards including A BAFTA Award

Debra Granik is an American filmmaker. She is most known for 2004's Down to the Bone, which starred Vera Farmiga, 2010's Winter's Bone, which starred Jennifer Lawrence in her breakout performance and for which Granik was nominated for the Academy Award for Best Adapted Screenplay, and 2018's Leave No Trace, a film based on the book My Abandonment by Peter Rock.

Trouble the Water is a 2008 documentary film produced and directed by Tia Lessin and Carl Deal. The film portrays a young couple surviving Hurricane Katrina, leading them to face their own troubled past during the storm's aftermath, in a community abandoned long before the hurricane hit. It features music by Massive Attack, Mary Mary, Citizen Cope, John Lee Hooker, The Roots, Dr. John and Blackkoldmadina. Trouble the Water is distributed by Zeitgeist Films and premiered in theaters in New York City and Los Angeles on August 22, 2008, followed by a national release.

Chip Hourihan is an American film producer and director.

Tanya Hamilton is an American film director and producer. She came to the United States at the age of eight, and settled in Maryland with her mother. She attended Duke Ellington School of the Arts, Cooper Union for the Advancement of Science and Art, and Columbia University.

Azazel Jacobs is an American film director and screenwriter. He is the son of experimental filmmaker Ken Jacobs. His short films include Kirk and Kerry and Message Machine, and his features include the acclaimed Momma's Man,Terri,The Lovers, and French Exit.

David Zellner is an American film director, screenwriter and actor. He lives and works in Austin, Texas. Zellner is best known for directing the films Kid-Thing (2012) and Kumiko, the Treasure Hunter (2014). 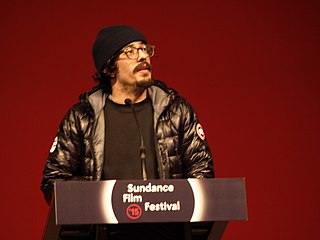 Josh Mond is an American film director, screenwriter and producer. He is known for producing the feature films Martha Marcy May Marlene (2011) and Simon Killer (2012), and for writing and directing James White (2015).

Shrihari Sathe is an Indian filmmaker and producer. Sathe is a 2013 Sundance Institute Creative Producing Fellow. His feature directorial debut, 1000 Rupee Note , won the Special Jury Award and Centenary Award for Best Film at the 2014 International Film Festival of India and has received over 35 awards. He was a member of the jury at the 2017 Miami International Film Festival. Shrihari Sathe received the Producers Award 2019 as part of 34th Independent Spirit Awards.

Laure de Clermont-Tonnerre is a French film actress, director, producer, and screenwriter. Beginning as an actress in primarily French film and television, she transitioned into film directing and screenwriting. In 2019, she directed, associated produced, and co-wrote her debut feature film, The Mustang. For the film, she was nominated for Best First Feature at the 35th Independent Spirit Awards and she won the Bingham Ray Breakthrough Director Award at the 2019 Gotham Independent Film Awards. She also won Best First Feature at the 24th Satellite Awards. She had previously written and directed two shorts, Atlantic Avenue and Rabbit, debuting the latter at Sundance Film Festival. In 2019, she also directed three episodes, including the pilot, of the TV show The Act. She directed Lady Chatterley's Lover, a film adaptation of D. H. Lawrence's novel Lady Chatterley's Lover, starring Emma Corrin.

Britta H. Sjogren is an independent filmmaker and academic.