"Hoodie" is the fourth single from hip hop artist Lady Sovereign's debut album Public Warning , following the release of her first UK top 40 hit, "9 to 5". The single was produced by UK dance outfit Basement Jaxx and became her third top 75 hit, peaking at #44 in the UK Singles Chart. [1] The single's B-side was her debut 12" single "Ch Ching (Cheque 1 2)". [2]

The single was recorded to coincide with her "Save the Hoodie" campaign. [3] Lady Sovereign wrote the single as she was angry that individuals wearing hoodies were being persecuted against due to people stating that they created social fear. [4] Lady Sovereign stated at the time, "I'm all about standing up for the hoodie. They wanna have a moan about people that wear them, but I wear them all the time and I don't like the way some other people dress". [5]

Lady Sovereign references the Three stripes trademark of Adidas in the song. [6]

The song had been featured on a Mario Party DS advertisement in 2007. 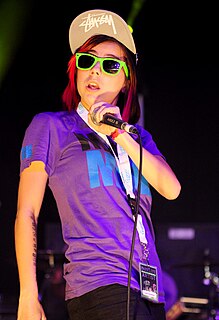 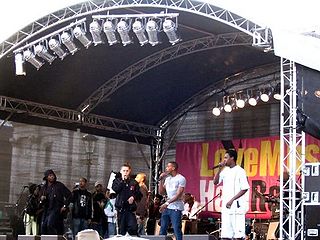 Roll Deep are a British grime crew. They were founded in 2001 by Wiley shortly before the disbandment of UK garage crew Pay As U Go Cartel.

"Random" is the first CD single from UK hip hop artist Lady Sovereign, following the release of her 12" vinyl single "Ch Ching " in 2004. It was her second and last single for Casual Records in 2005. 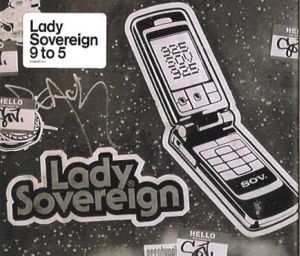 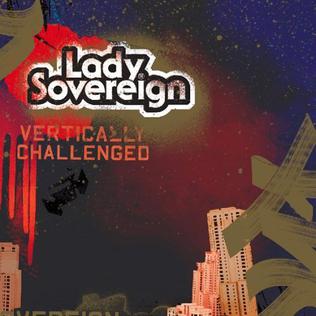 Run the Road is a series of compilations released on 679 Recordings and Vice. It is intended to showcase a wide variety of grime artists from the genre such as Dizzee Rascal, Wiley and Kano.

DaVinChe, is a British record producer and songwriter from South London, England who is best known as one of the pioneer producers in the UK grime scene. His notable works include Kano's "Brown Eyes" and "P's and Q's", Mez Featuring Stormzy "Lex Luther", Giggs and Shola Ama "Blow Em' Away", Bashy featuring Wretch 32's "Male Pride", Tinie Tempah's "Tears", Tinchy Stryder's "Something About Your Smile", and a funky house hit collaboration with long time friends DJ Perempay and Katie Pearl "Something in the Air".

T4 on the Beach was an annual British one-day music event which was held on the beach at Weston-super-Mare and televised on Channel 4. The event began in 2003 as Pop Beach in Great Yarmouth, changing to the current title and venue in 2005. The day consisted of a number of major contemporary pop and rock music acts from the UK and overseas, performing short sets in front of an audience of over 40,000. In addition to the main stage a smaller 4Music stage has provided a platform for newer upcoming bands, renamed in 2010 to the T4 Sessions stage.

"Hurry Up" is a song by Australian singer Che'Nelle from her debut studio album, Things Happen for a Reason (2007). The song was released as the second single from the album. A music video was released for the song. The song was written and produced by both Sean Garrett and Warren Felder and was recorded in Atlanta, Georgia. The song received an official remix for its UK release featuring the rapper Tinchy Stryder. 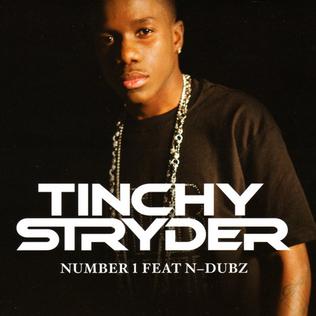 The discography of Tinchy Stryder, a recording artist whose real name is Kwasi Danquah, consists of four studio albums, one compilation album, one collaboration album, five extended plays, four mixtapes, 17 singles, five singles as a featured artist, and ten collaborations. Danquah has sold over 22.2 million digital singles worldwide. Danquah performed under the stage name Stryder from 1997 to 2006, and has performed under the stage name Tinchy Stryder since 2006.

"Game Over" is a song by Tinchy Stryder, released as a promotional single from his third studio album Third Strike. The song features vocals from Example, Giggs, Devlin, Chipmunk, Professor Green and Tinie Tempah, who each have their own verse. It was released on 15 November 2010 via digital download. An official remix featuring Ghetts, Slix, Griminal, Dot Rotten, Fuda Guy, Wretch 32, Roachee, Maxsta & Tinchy Stryder, can be found with a video on YouTube.

Jamie Adenuga, known professionally as Jme, is a British grime MC, songwriter, record producer and DJ who was born in Hackney, and raised in Tottenham. He is the co-founder of the crew and label Boy Better Know. He was previously part of the grime collective Meridian Crew and later Roll Deep alongside his older brother, Skepta.

The following is a discography of Skepta, a British MC from Tottenham, London. He is a producer and DJ commonly associated with the North London grime scene, including Roll Deep and Boy Better Know. Skepta released his debut album Greatest Hits on 17 September 2007. It was released on the Boy Better Know label. Skepta self-released the first single "Rolex Sweep" in September 2008, which reached number 89 on the UK Singles Chart. He released the album Microphone Champion on 1 June 2009. The single "Too Many Man", with JME, Wiley, Frisco and Shorty, charted at number 79.

Brandon Jolie, known professionally as Maniac, is a British grime producer. Maniac has produced for various artists such as Wiley, Tinchy Stryder, and Chip.

The Ascent is the ninth studio album by English grime artist Wiley. The album was released on 1 April 2013, via Warner Music Group and Boy Better Know, after originally being slated to be released on 4 February and 11 March, respectively. The Ascent succeeds Evolve or Be Extinct which was released in January 2012. The album features a variety of experimental genres, varying from dance pop to grime. The lead single "Heatwave", featuring Ms D, peaking at number 1 on the UK Singles Chart, becoming Wiley's first number 1 as a solo artist. This was followed by "Can You Hear Me? (Ayayaya)" featuring Skepta, JME and Ms D, "Reload" featuring Chip and Ms D, all of which peaked in the top 10.