Icarus's Mother is a one-act play by Sam Shepard. [1]

It was first staged at the Caffe Cino in 1965, directed by Michael Smith, a drama critic, with a cast that included John Coe, a veteran of the Living Theatre.

Caffe Cino was an Off-Off-Broadway theater founded in 1958 by Joe Cino. The West Village coffeehouse, located at 31 Cornelia Street, was initially imagined as a venue for poetry, folk music, and visual art exhibitions. The plays produced at the Cino, however, became most prominent, and it is now considered the "birthplace of Off-Off-Broadway".

Those two plays, as well as Icarus' Mother and two other plays, were included in the first published collection of Shepard's play scripts, entitled Five Plays (1966).

As the play opens, a group of five people (three men, two women) are digesting a big picnic meal and belching. They are lying on a lawn near a beach, while waiting for a fireworks display to begin. Although the characters don't specifically mention the Fourth of July, a number of patriotic references are used. A jet plane is flying overhead. Various kinds of funny but tense conflicts, word games, and mind games take place among the group. Two of the men, Howard and Bill, seem to be conspiring against the others. They send up smoke signals three times from a barbecue while the others are absent and hide the fact that they're doing this. There's no explanation as to why they're sending up the signals or what the signals are supposed to mean. The two women, who have been off stage, return to boast that they have been stripping and shimmying, in an attempt to distract the jet pilot. Just as the fireworks begin, the jet plane crashes nearby, sending the other man, Frank, into an extended verbal spasm, indicating he may be on drugs or has lost his mind. His lengthy monologue contains some inspired poetry, especially among Shepard's early plays. At the end of his speech Frank staggers off stage, deeply lost and confused, while bellowing that he has just seen something memorable and historic. The two women run across the stage, announcing wildly that the jet plane has crashed. Possibly frightened and trying to comfort each other, although they could just as easily be gloating about their success, Howard and Bill silently hold hands and stare at the audience, as the offstage fireworks continue and the play ends.

Patsy Cline was an American country music singer and part of the Nashville sound during the late 1950s and early 1960s. She successfully "crossed over" to pop music and was one of the most influential, successful, and acclaimed vocalists of the 20th century. She died at age 30 in the crash of a private airplane.

"King Nine Will Not Return" is the season two premiere episode, and 37th overall, of the American television anthology series The Twilight Zone. It originally aired on September 30, 1960 on CBS.

Short Cuts is a 1993 American comedy-drama film, directed by Robert Altman. Filmed from a screenplay by Altman and Frank Barhydt, it is inspired by nine short stories and a poem by Raymond Carver. The film has a Los Angeles setting, which substitutes the Pacific Northwest backdrop of Carver's stories. Short Cuts traces the actions of 22 principal characters, both in parallel and at occasional loose points of connection. The role of chance and luck is central to the film, and many of the stories concern death and infidelity. 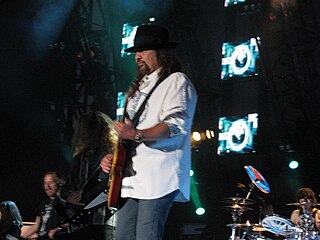 Gary Robert Rossington is an American musician best known as a founder of southern rock band Lynyrd Skynyrd, in which he is the sole constant member. He plays lead and rhythm guitar. He was a founding member of the Rossington Collins Band along with former bandmate, Allen Collins.

Claire Littleton is a fictional character played by Emilie de Ravin on the ABC drama television series Lost, which chronicles the lives of the survivors of a plane crash in the South Pacific. Claire is introduced in the pilot episode as a pregnant crash survivor. She is a series regular until her mysterious disappearance in the fourth season finale. The character returned as a regular in the sixth season.

Shannon Rutherford is a fictional character played by Maggie Grace on the ABC drama television series Lost, which chronicled the lives of the survivors of a plane crash in the South Pacific. Shannon was introduced in the pilot episode as the stepsister of fellow crash survivor Boone Carlyle. She was a series regular until her funeral in "What Kate Did". For most of her time on the Island, she was unhelpful and spent much of her time sunbathing. She formed a relationship with another survivor from the plane crash, Sayid Jarrah. Shannon was accidentally shot by Ana Lucia Cortez who mistakes her for an Other. 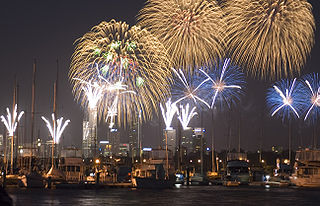 The City of Perth Skyworks is a fireworks show in Perth, Western Australia. It is held each year on Australia Day over Perth Water, the section of the Swan River adjacent to the central business district.

"Devil's Planet" is the twenty-second episode of the second series of the British sci-fi television series Space: 1999. The screenplay was written by Michael Winder; the director was Tom Clegg. The original title of the episode was "Devil's Moon". The final shooting script is dated 9 September 1976 and live-action filming began on Monday 1 November 1976 lasting through to Thursday 18 November 1976. The episode was first broadcast in the U.K. on 1 September 1977.

Crash Boom Bang!, known in Japan as Crash Bandicoot Festival, is a party game developed by Dimps and published by Vivendi Universal Games for the Nintendo DS. It was released in Japan on July 20, 2006, in North America on October 10, 2006, in Europe on October 27, 2006, and in Australia on November 2, 2006. It is the first game the Crash Bandicoot series to be developed by a Japanese company and the first to be released in Japan before North America.

Donovan's Brain is an independently made 1953 black-and-white science fiction horror film, produced by Allan Dowling and Tom Gries, directed by Felix E. Feist, that stars Lew Ayres and Nancy Davis. The film was distributed by United Artists and is based on the 1942 horror novel Donovan's Brain by Curt Siodmak.

Ollie Imogene "Jean" Shepard was an American honky tonk singer-songwriter who pioneered for women in country music. Shepard released a total of 73 singles to the Hot Country Songs chart, one of which reached the No. 1 spot. She recorded a total of 24 studio albums between 1956–81, and became a member of the Grand Ole Opry in 1955.

Flight of the Living Dead is a 2007 direct-to-video zombie film by director Scott Thomas. Thomas co-wrote the screenplay with Mark Onspaugh and Sidney Iwanter. The film was originally titled Plane Dead, but the title was changed at Montreal's 2007 Fantasia Festival screening. In spite of a successful screening there and at other festivals, the film did not gain a commercial release and was issued directly to DVD in unrated form.

The Rescue is a 1988 adventure film about a group of teenagers who infiltrate a North Korean prison to rescue their Navy SEAL fathers. It was written by Michael J. Henderson, Jim Thomas, and John Thomas, produced by Laura Ziskin, and directed by Ferdinand Fairfax. The film stars Kevin Dillon, Ned Vaughn, Marc Price, Charles Haid, Christine Harnos, Ian Giatti, and James Cromwell.

Play Girl is a 1941 romantic comedy film, starring Kay Francis as an aging gold digger who decides to pass on her skills to a young protegée, and featuring James Ellison, Mildred Coles, Nigel Bruce, Margaret Hamilton and Katherine Alexander.

Got You on My Mind is the third studio album released by American country artist, Jean Shepard. The album was issued in February 1961 on Capitol Records and was produced by Ken Nelson. The album would be one of a series of albums Shepard would record for the Capitol label during the sixties. Although the album did not spawn singles, it was one of country music's first records by a female artist.