Indian Neck Hall was a country residence of Frederick Gilbert Bourne, president of the Singer Sewing Machine Company. Located on the Great South Bay in Oakdale, New York, it was reputed to have been the largest estate on Long Island when it was built in 1897.

The Georgian-style home was designed by a noted architect, Ernest Flagg. In 1926, the property was sold and became La Salle Military Academy. St. John's University acquired the property in 2001 and offers a number of its graduate degree programs from the Oakdale campus. [1]

Bohemia is a hamlet in Suffolk County, New York, United States. The population was 10,180 at the 2010 census. It is situated along the South Shore of Long Island in the Town of Islip, approximately 50 miles from New York City.

West Sayville is a hamlet and census-designated place (CDP) in Suffolk County, New York, United States. It had a population of 5,011 at the 2010 census.

Oakdale is a borough in Allegheny County, Pennsylvania, United States and is a Pittsburgh suburb. The population was 1,459 at the 2010 census. Its zip code is 15071. 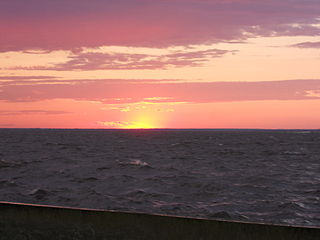 The Great South Bay is a lagoon situated between Long Island and Fire Island, in the State of New York. It is about 45 miles (72 km) long and has an average depth of 4 feet 3 inches and is 20 feet at its deepest. It is protected from the Atlantic Ocean by Fire Island, a barrier island, as well as the eastern end of Jones Beach Island and Captree Island.

Washington Park was the name given to three Major League Baseball parks on two different sites in the Park Slope neighborhood of Brooklyn, New York, located at Third Street and Fourth Avenue. The two sites were diagonally opposite each other at that intersection.

Idle Hour is a former Vanderbilt estate that is located in Oakdale on Long Island in Suffolk County, New York. It was completed in 1901 for William Kissam Vanderbilt. Once part of Dowling College, the mansion is one of the largest houses in the United States. 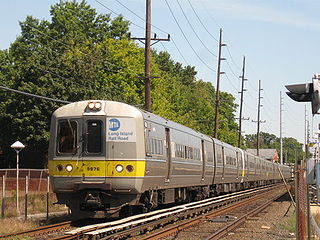 The Far Rockaway Branch is an electrified rail line and service owned and operated by the Long Island Rail Road in the U.S. state of New York. The branch begins at Valley Interlocking, just east of Valley Stream station. From Valley Stream, the line heads south and southwest through southwestern Nassau County, ending at Far Rockaway in Queens, thus reentering New York City. LIRR maps and schedules indicate that the Far Rockaway Branch service continues west along the Atlantic Branch to Jamaica. This two-track branch provides all day service in both directions to the Atlantic Terminal in Brooklyn, with limited weekday peak service to/from Penn Station in Midtown Manhattan. During peak hours, express service may bypass Jamaica station.

The Stewart B. McKinney National Wildlife Refuge is a 950-acre (384.5 ha) National Wildlife Refuge in ten units across the U.S. state of Connecticut. Located in the Atlantic Flyway, the refuge spans 70 miles (110 km) of Connecticut coastline and provides important resting, feeding, and nesting habitat for many species of wading birds, shorebirds, songbirds and terns, including the endangered roseate tern. Adjacent waters serve as wintering habitat for brant, scoters, American black duck, and other waterfowl. Overall, the refuge encompasses over 900 acres (364.2 ha) of barrier beach, intertidal wetland and fragile island habitats.

Strongs Neck is a hamlet and peninsula just south of Long Island Sound and hamlet in Suffolk County, New York, United States, on the North Shore of Long Island.

The Oakdale Theatre is a multi-purpose performance venue, located in Wallingford, Connecticut. Opened in 1954, the venue consists of an auditorium and domed theatre, known as The Dome at Oakdale.

The Roger New York is a luxury hotel in midtown Manhattan, New York City. The hotel is operated and managed by Los Angeles-based JRK Property Holdings.

Oakdale Memorial Gardens, formerly Oakdale Cemetery, is located in east-central Davenport, Iowa, United States. It contains a section for the burial of pets called the Love of Animals Petland. In 2015, the cemetery was listed as an historic district on the National Register of Historic Places, and as a local landmark on the Davenport Register of Historic Properties. It is also listed on the Network to Freedom, a National Park Service registry for sites associated with the Underground Railroad.

Oakdale is an unincorporated community in Peru Township, Miami County, in the U.S. state of Indiana.

Coney Island is a small island in the San Joaquin River delta, in California. It is part of Contra Costa County, and managed by Reclamation District 2117. Its coordinates are 37.8457598°N 121.5493939°W. It appears on a 1978 United States Geological Survey map of the area.