Institute of the Pennsylvania Hospital

Two large hospital structures and an elaborate pleasure ground were built on a campus that stretched along the north side of Market Street, from 45th to 49th Streets. Thomas Story Kirkbride, the hospital's first superintendent and physician-in-chief, developed a more humane method of treatment for the mentally ill there, that became widely influential. The hospital's plan became a prototype for a generation of institutions for the treatment of the mentally ill nationwide. [1] The surviving 1859 building was designated a National Historic Landmark in 1965.

Pennsylvania Asylum for the Insane—Kirkbride's Hospital

In the late 1830s, the managers of Pennsylvania Hospital began erecting a large asylum to replace the hospital's crowded insane wards at 8th and Spruce Streets. The 101-acre (41 ha) site chosen was a former farm in the as-yet unincorporated district of West Philadelphia. The first structure for the Pennsylvania Asylum for the Insane was designed by Isaac Holden and was located near what is now 46th and Market Streets. Completed in 1841, the facility offered comforts and a "humane treatment" philosophy that set a standard for its day. Unlike other asylums where patients were often kept chained in crowded, unsanitary wards with little if any treatment, patients at the Pennsylvania Asylum resided in private rooms, received medical treatment, worked outdoors and enjoyed recreational activities including lectures and a use of the hospital library. The facility came to be called "Kirkbride's Hospital."

Superintendent Thomas Kirkbride developed his treatment philosophy based on research he conducted at other progressive asylums of the day, including the one in Worcester, as well as his deep-seated personal opinions regarding mental health and his experience at the Pennsylvania Asylum. Out of his philosophy emerged the Kirkbride Plan, which created a model design for psychiatric hospital buildings that was used across the United States throughout the 19th century. He described his system in great detail in his influential work, On the Construction, Organization, and General Arrangements of Hospitals for the Insane with Some Remarks on Insanity and Its Treatment (1854).

Overcrowding had become a problem in the original Pennsylvania Asylum for the Insane by the 1850s, so Kirkbride lobbied the Pennsylvania Hospital managers for an additional building. The situation offered him a unique opportunity to place his standardized concepts for mental hospital design and construction into effect at a facility under his control. The Pennsylvania Hospital's Department for Males building was soon constructed along 49th Street, a short distance west from the original asylum. Completed in 1859, this huge structure consisted of several wings extending from a main central building. It introduced many innovations in terms of spaciousness, airiness and light, that were subsequently widely reproduced in other facilities. Young architect Samuel Sloan, Kirkbride's friend and collaborator, designed the Neoclassical style building.

Mental health services at the Institute of the Pennsylvania Hospital continued to expand throughout the 19th and early 20th centuries. But by the mid-20th century, the 1841 hospital building proved unusable for this purpose and was demolished in 1959. All treatment moved to the Department for Males building in 1959. That structure was listed on the National Register of Historic Places and was designated a National Historic Landmark on October 15, 1966.

The Institute was located in what is now the Mill Creek neighborhood of Philadelphia. It continued operations until 1997 when, in the face of shrinking revenues from insurance providers, Pennsylvania Hospital sold the property and moved its mental health services back to the main hospital campus at 8th and Spruce Streets. Three tall housing projects and a multi-purpose social-service facility were built near the site of the 1841 hospital. Other parts of the property were sold for commercial and residential development in 2001.

St. Elizabeths Hospital is a psychiatric hospital in Southeast, Washington, D.C. It opened in 1855 as the first federally operated psychiatric hospital in the United States. Housing over 8,000 patients at its peak in the 1950s, the hospital had a fully functioning medical-surgical unit, a school of nursing, accredited internships and psychiatric residencies. Its campus was designated a National Historic Landmark in 1990. 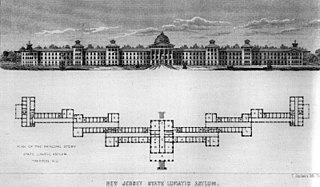 The Kirkbride Plan was a system of mental asylum design advocated by Philadelphia psychiatrist Thomas Story Kirkbride (1809–1883) in the mid-19th century. The asylums built in the Kirkbride design, often referred to as Kirkbride Buildings, were constructed during the mid-to-late-19th century in the United States. The structural features of the hospitals as designated by Dr. Kirkbride were contingent on his theories regarding the healing of the mentally ill, in which environment and exposure to natural light and air circulation were crucial. The hospitals built according to the Kirkbride Plan would adopt various architectural styles, but had in common the "bat wing" style floor plan, housing numerous wings that sprawl outward from the center. 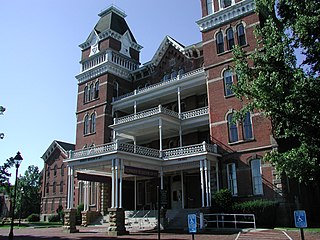 The Athens Lunatic Asylum, now a mixed-use development known as The Ridges, was a Kirkbride Plan mental hospital operated in Athens, Ohio from 1874 until 1993. During its operation, the hospital provided services to a variety of patients including Civil War veterans, children, and those declared mentally unwell. After a period of disuse the property was redeveloped by the state of Ohio. Today, The Ridges are a part of Ohio University and house the Kennedy Museum of Art as well as an auditorium and many offices, classrooms, and storage facilities.

Oregon State Hospital is a public psychiatric hospital in the U.S. state of Oregon, located in the state's capital city of Salem with a smaller satellite campus in Junction City opened in 2014. Founded in 1862 and constructed in the Kirkbride Plan design in 1883, it is the oldest operating psychiatric hospital in the state of Oregon, and one of the oldest continuously operated hospitals on the West Coast. 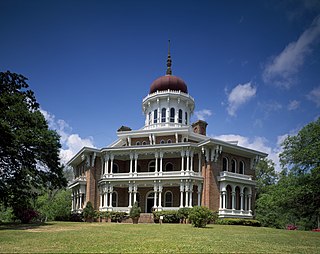 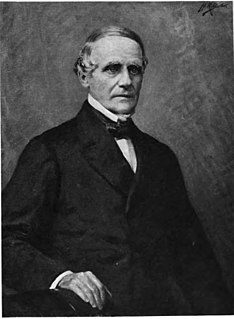 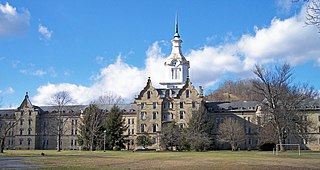 The Trans-Allegheny Lunatic Asylum, subsequently the Weston State Hospital, was a Kirkbride psychiatric hospital that was operated from 1864 until 1994 by the government of the U.S. state of West Virginia, in the city of Weston. Weston State Hospital got its name in 1913 which was used while patients occupied it, but was changed back to its originally commissioned, unused name, the Trans-Allegheny Lunatic Asylum, after being reopened as a tourist attraction.

Mendota Mental Health Institute (MMHI) is a public psychiatric hospital in Madison, Wisconsin, operated by the Wisconsin Department of Health Services. The hospital is accredited by the Joint Commission. Portions of the facility are included in the Wisconsin Memorial Hospital Historic District, District #88002183. The Mendota State Hospital Mound Group and Farwell's Point Mound Group are also located at the facility.

The Kalamazoo Psychiatric Hospital (KRPH) is the largest mental health institution in Michigan. It was built under the Kirkbride Plan.

Worcester State Hospital was a Massachusetts state mental hospital located in Worcester, Massachusetts. It is credited to the architectural firm of Weston & Rand. The hospital and surrounding associated historic structures are listed as Worcester Asylum and related buildings on the National Register of Historic Places. 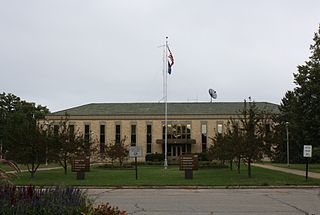 The Mount Pleasant Mental Health Institute was a psychiatric institution located in Mount Pleasant, Iowa, USA. Originally known as the Iowa Lunatic Asylum, it opened in 1861. It is located on the same campus as The Mount Pleasant Correctional Facility. There was also a labyrinth of tunnels which connect every building. Like most asylums of its time, it had a gruesome and dark history. Remnants of this are the graveyard, hydrotherapy tubs and lobotomy equipment. It was the first asylum in Iowa and was built under the Kirkbride Plan. It was closed after a massive fire destroyed most of the building and left the rest of the complex beyond repair.

The Clarinda Treatment Complex was built in 1884 as the Clarinda State Hospital in Clarinda, Iowa in southwest Iowa. It was the third asylum in the state of Iowa. The hospital's many name variations include: The Clarinda Lunatic Asylum, The Clarinda State Asylum, The Clarinda Asylum for the Insane, and The Clarinda Mental Health Institute. It was built under the Kirkbride Plan. The original plan for patients was to hold alcoholics, geriatrics, drug addicts, mentally ill, and the criminally insane. In 2009, it was made public that, to save money, the state may close one of the four hospitals in Iowa. On June 30, 2015, the hospital facility was shut down and all patient services terminated. The Clarinda Academy, owned by Sequel Youth Services, is the sole occupant of the former hospital grounds.

The Sheppard and Enoch Pratt Hospital, known to many simply as Sheppard Pratt, is a psychiatric hospital located in Towson, a northern suburb of Baltimore, Maryland. Founded in 1853, it is one of the oldest private psychiatric hospitals in the nation. Its original buildings, designed by architect Calvert Vaux, and its Gothic gatehouse, built in 1860 to a design by Thomas and James Dixon, were designated a National Historic Landmark in 1971.

The Dorothea Dix Psychiatric Center is a psychiatric hospital operated by the state of Maine. It is located at 656 State Street in Bangor, and was previously known as the Eastern Maine Insane Asylum and the Bangor Mental Health Institute. It was established in 1895, and the main building on its campus is listed on the National Register of Historic Places.

The Maine Insane Hospital, later the Augusta Mental Health Institute, was a psychiatric hospital in Augusta, Maine. It was the principal facility for the care and treatment of Maine's mentally ill from 1840 to 2004, and its surviving buildings represent the oldest surviving complex of mental care facilities in the United States. The complex is located on the east bank of the Kennebec River, immediately south of the former Kennebec Arsenal, and now primarily houses state offices. The hospital was replaced by the Riverview Psychiatric Center, located just to the south. The hospital's core complex was listed on the National Register of Historic Places in 1982, with the listing enlarged to encompass the entire campus in 2001.