The International Seamen's Union (ISU) was an American maritime trade union which operated from 1892 until 1937. In its last few years, the union effectively split into the National Maritime Union and Seafarer's International Union.

Formed by maritime labor representatives from America's Pacific, Great Lakes and Gulf Coast regions, [1] in 1893, the ISU affiliated with the American Federation of Labor, [2] and took the name International Seamen's Union of America in 1895. [2]

The union existed at a turbulent time in the United States shipping industry. The unions within the ISU faced "continual changeover in the makeup and leadership," [1] and weathered the historical periods of the Great Depression and World War I. Select periods were beneficial, including during World War I when a shipping boom and ISU's membership included more than 115,000 dues-paying members. [1] However, when the boom ended, the ISU's membership shrunk to 50,000. [1]

During its existence, the union did have a major effect on the shipping industry. Perhaps the most significant was the successful lobby for the Seamen's Act of 1915. The act fundamentally changed the life of the American sailor. Among other things, it:

Another of ISU's successes was the strike of 1919, which resulted in wages that were "an all-time high for deep sea sailors in peace time." [1]

However, ISU had its shortcomings and failures, too. After a round of failed contract negotiations, ISU issued an all-ports strike on May 1, 1921. The strike lasted only two months and failed, with resulting wage cuts of 25 percent. [1] The ISU, as with all AFL unions, was criticized as being too conservative. For example, in 1923 the Industrial Workers of the World publication The Marine Worker referred to the ISU's "pie-cards" (paid officials) as "grafters and pimps." [3] Additionally, the union was weakened by the loss of the Sailors' Union of the Pacific in 1934. Furuseth charged that the SUP was being infiltrated by "radicals" from the IWW, [1] and demanded the SUP cease activities with the Maritime Federation. The SUP refused and the ISU revoked their charter. [4]

The ISU was involved the West Coast longshoremen's strike of 1934. [1] Lasting 83 days, the strike led to the unionization of all West Coast ports of the United States. The San Francisco general strike, along with the 1934 Toledo Auto-Lite Strike led by the American Workers Party and the Minneapolis Teamsters Strike of 1934, were important catalysts for the rise of industrial unionism in the 1930s.

West Coast sailors deserted ships in support of the International Longshoremen's Association longshoremen, leaving more than 50 ships idle in the San Francisco harbor. [1] ISU officials reluctantly supported this strike. In clashes with the police between July 3 and July 5, 1934, three picketers were killed and "scores were injured." [1] During negotiations to end the strike, the sailors received concessions including a three-watch system, pay increases, and better living conditions.

In April 1935 [5] at a conference of maritime unions in Seattle, an umbrella union was established to represent the membership of the ISU as well as maritime officers and longshoremen. Called the Maritime Federation, Harry Lundeberg was named its first president. [5]

The rise of the NMU

In 1936, an ISU boatswain by the name of Joseph Curran was drawing attention. From March 1 to March 4, Curran led a strike aboard the S.S. California , then docked in San Pedro, California. [6] [7] [8] [9] Seamen along the East Coast struck to protect the treatment of the S.S. California's crew. Curran became a leader of the 10-week strike, eventually forming a supportive association known as the Seamen's Defense Committee. In October 1936, Curran called a second strike, the 1936 Gulf Coast maritime workers' strike, in part to improve working conditions and in part to embarrass the ISU. The four-month strike idled 50,000 seamen and 300 ships along the Atlantic and Gulf coasts. [7] [9] [10]

Believing it was time to abandon the conservative ISU, Curran began recruiting members for a new rival union. The level of organizing was so intense that hundreds of ships delayed sailing as seamen listened to organizers and signed union cards. [11] The ISU's official publication, The Seamen's Journal, suggested Curran's "sudden disenchantment" with the ISU was odd, since he'd only been a "member of the union for one year during his seafaring career." [1]

In May 1937, Curran and other leaders of his Seamen's Defense Committee reconstituted the group as the National Maritime Union. Holding its first convention in July, approximately 30,000 seamen switched their membership from the ISU to the NMU and Curran was elected president of the new organization. [6] [7] [9] Within a year, the NMU had more than 50,000 members and most American shippers were under contract. [9] [11]

In August 1937, William Green, president of the American Federation of Labor, assumed control of the ISU with the goal of rebuilding it under the AFL. He assigned this task to Harry Lundeberg, who was also head of the Sailor's Union of the Pacific. [12] On October 15, 1938 at an AFL convention in Houston, Texas, Green handed Lundeberg the Seafarer's International Union charter. The new union represented 7,000 members on the East and Gulf coasts. Seventy years later, SIU holds the charters to both NMU and SUP. [1]

The 1934 West Coast Waterfront Strike lasted eighty-three days, and began on May 9, 1934 when longshoremen in every US West Coast port walked out. The strike peaked with the death of two workers on "Bloody Thursday" and the San Francisco General Strike which stopped all work in the major port city for four days and led ultimately to the settlement of the West Coast Longshoremen's Strike.

The Seafarers International Union or SIU is an organization of 12 autonomous labor unions of mariners, fishermen and boatmen working aboard vessels flagged in the United States or Canada. Michael Sacco has been its president since 1988. The organization has an estimated 35,498 members and is the largest maritime labor organization in the United States. Organizers founded the union on October 14, 1938. The Seafarers International Union arose from a charter issued to the Sailors Union of the Pacific by the American Federation of Labor as a foil against loss of jobs to the Congress of Industrial Organizations (CIO) and its Communist Party-aligned faction. 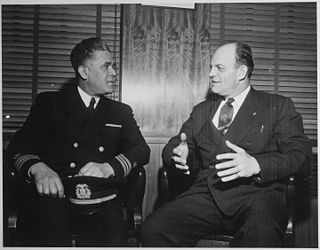 Joseph Curran was a merchant seaman and an American labor leader. He was founding president of the National Maritime Union from 1937 to 1973, and a vice president of the Congress of Industrial Organizations (CIO). 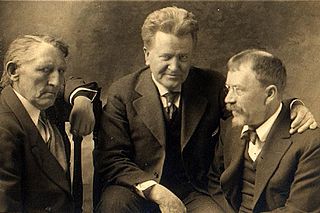 The Seamen's Act, formally known as Act to Promote the Welfare of American Seamen in the Merchant Marine of the United States or Longshore and Harbor Workers' Compensation Act, was designed to improve the safety and security of United States seamen and eliminate Shanghaiing.

Shannon J. Wall was a merchant seaman and an American labor leader. He was president of the National Maritime Union from 1973 to 1990. His father and mother ran a small dry cleaning company.

The SS California strike was a strike aboard the ocean liner SS California from 1 to 4 March 1936 as the ship lay docked in San Pedro, California. The strike led to the demise of the International Seamen's Union and the creation of the National Maritime Union.

The National Maritime Union (NMU) was an American labor union founded in May 1937. It affiliated with the Congress of Industrial Organizations (CIO) in July 1937. After a failed merger with a different maritime group in 1988, the union merged with the Seafarers International Union of North America in 2001. 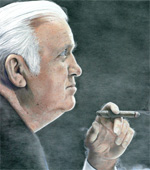 Paul Hall was an American labor leader from Inglenook in Jefferson County, Alabama. He was a founding member and president of the Seafarers International Union (SIU) from 1957 to 1980. He was the senior vice president of the AFL-CIO at the time of his death.

Harrald Olaf Lundeberg was a merchant seaman and an American labor leader.

The Sailors' Union of the Pacific (SUP), founded on March 6, 1885 in San Francisco, California, is an American labor union of mariners, fishermen and boatmen working aboard US flag vessels.

Andrew Furuseth of Åsbygda, Hedmark, Norway was a merchant seaman and an American labor leader. Furuseth was active in the formation of two influential maritime unions: the Sailors' Union of the Pacific and the International Seamen's Union, and served as the executive of both for decades.

The maritime history of the United States is a broad theme within the history of the United States. As an academic subject, it crosses the boundaries of standard disciplines, focusing on understanding the United States' relationship with the oceans, seas, and major waterways of the globe. The focus is on merchant shipping, and the financing and manning of the ships. A merchant marine owned at home is not essential to an extensive foreign commerce. In fact, it may be cheaper to hire other nations to handle the carrying trade than to participate in it directly. On the other hand, there are certain advantages, particularly during time of war, which may warrant an aggressive government encouragement to the maintenance of a merchant marine.

The maritime history of the United States (1800–1899) saw an expansion of naval activity.

The Portland Waterfront strike of 1922 was a labor strike conducted by the International Longshoremen's Association which took place in Portland, Oregon from late April to late June 1922. The strike was ineffective at closing down the Port of Portland due to strikebreakers, and on June 22 the strike ended with the employers dictating terms.

The 1936 Gulf Coast maritime workers' strike was a labor action of the splinter union "Maritime Federation of the Gulf Coast" lasting from October 31, 1936 to January 21, 1937. The strike's main effects were felt in Houston and Galveston.

Ferdinand Smith was a Jamaican-born Communist labor activist. A prominent activist in the United States and the West Indies, Smith co-founded the National Maritime Union with Joseph Curran and M. Hedley Stone. By 1948 he was wanted by the U.S. Immigration Service for deportation, and is remembered as one of the most powerful black labor leaders in U.S. history.