In law, intervention is a procedure to allow a nonparty, called intervenor (also spelled intervener) to join ongoing litigation, either as a matter of right or at the discretion of the court, without the permission of the original litigants. The basic rationale for intervention is that a judgment in a particular case may affect the rights of nonparties, who ideally should have the right to be heard.

Intervenors are most common in appellate proceedings, but can also appear at other types of legal proceeding such as a trial.

In general, it is within the discretion of the court to allow or refuse an application to intervene. There are exceptions to this however (for example, under subrule 61(4) of the Rules of the Supreme Court of Canada, if the court has stated a constitutional question then the attorney general of any province or territory, or of the federal government, may intervene "as of right", i.e. without the need to be granted leave to intervene).

Courts will tend to allow an application to intervene if the applicant will provide a different perspective on the issues before the court, without expanding those issues.

There are several distinct reasons why someone might wish to intervene in a proceeding:

Canadian courts (also courts in UK) use the term "amicus curiae" in a more limited sense. Generally, in Canada, an amicus curiae is someone who has been specifically commissioned by the court to provide a viewpoint which the court believes is necessary and otherwise lacking. By contrast, an intervenor is someone who has applied to the court to be heard on a matter. For example, the Quebec Secession Reference (a case in the Supreme Court of Canada) had one amicus curiae and several intervenors.

The Attorney-General has the right to intervene in a private lawsuit if the lawsuit may affect "the prerogatives of the Crown, including its relations with foreign states". Furthermore, the Attorney-General may intervene with leave of the court where "the suit raises any question of public policy on which the executive may have a view which it may desire to bring to the notice of the court". [1]

In the context of judicial review, an interested party is 'any person (other than the claimant and defendant) who is directly affected by the claim'. [2] [3] [4] For example, in Bell v Tavistock , the defendant (a specialist NHS clinic) offered GnRHa drug treatment to children. The complainant, who as a teenager was subjected to treatment, in 2020 posited that because of her tender years she was unable to, and hence could not, give informed consent. As the specialist clinic could not represent the wider NHS, the judiciary listed the NHS as an interested party, because of its role in supervision of the clinic and because it needed judicial notification of the results, for example in case other clinics were involved with the administration of GnHRa drugs to children. In the event, Matt Hancock decided not to instruct the Attorney-General but he had the opportunity to do so by virtue of being an interested party. [5]

In the United States federal courts, intervention is governed by Rule 24 of the Federal Rules of Civil Procedure.

In the courts of the State of Texas, a jurisdiction whose rules of civil procedure differ considerably from the Federal Rules of Civil Procedure, a nonparty may intervene in a pending lawsuit by filing a pleading, which is typically called “plea in intervention” or “petition in intervention” without leave of the court, but any party in the pending lawsuit may object and ask for the intervention to be struck for cause. [6] While the Texas Rules of Civil Procedure require no judicial permission and impose no intervention deadline, common law dictates that a party may not intervene post-judgment unless the trial court first sets aside the judgment. See State v. Naylor, 466 S.W.3d 783, 788 (Tex. 2015). [7] For the same reason, an intervenor must enter the lawsuit before final judgment to have standing to bring an appeal.

A class action, also known as a class action lawsuit, class suit, or representative action, is a type of lawsuit where one of the parties is a group of people who are represented collectively by a member or members of that group. The class action originated in the United States and is still predominantly a U.S. phenomenon, but Canada, as well as several European countries with civil law, have made changes in recent years to allow consumer organizations to bring claims on behalf of consumers.

In law, interrogatories are a formal set of written questions propounded by one litigant and required to be answered by an adversary in order to clarify matters of fact and help to determine in advance what facts will be presented at any trial in the case.

Vexatious litigation is legal action which is brought solely to harass or subdue an adversary. It may take the form of a primary frivolous lawsuit or may be the repetitive, burdensome, and unwarranted filing of meritless motions in a matter which is otherwise a meritorious cause of action. Filing vexatious litigation is considered an abuse of the judicial process and may result in sanctions against the offender.

In law, standing or locus standi is the ability of a party to demonstrate to the court sufficient connection to and harm from the law or action challenged to support that party's participation in the case. Standing exists from one of three causes:

An amicus curiae is someone who is not a party to a case who assists a court by offering information, expertise, or insight that has a bearing on the issues in the case. The decision on whether to consider an amicus brief lies within the discretion of the court. The phrase amicus curiae is legal Latin.

Interpleader is a civil procedure device that allows a plaintiff or a defendant to initiate a lawsuit in order to compel two or more other parties to litigate a dispute. An interpleader action originates when the plaintiff holds property on behalf of another, but does not know to whom the property should be transferred. It is often used to resolve disputes arising under insurance contracts.

Service of process is the procedure by which a party to a lawsuit gives an appropriate notice of initial legal action to another party, court, or administrative body in an effort to exercise jurisdiction over that person so as to enable that person to respond to the proceeding before the court, body, or other tribunal.

Small-claims courts have limited jurisdiction to hear civil cases between private litigants. Courts authorized to try small claims may also have other judicial functions, and go by different names in different jurisdictions. For example, it may be known as a county or magistrate's court. These courts can be found in Australia, Brazil, Canada, England and Wales, Hong Kong, Ireland, Israel, New Zealand, Philippines, Scotland, Singapore, South Africa and the United States. 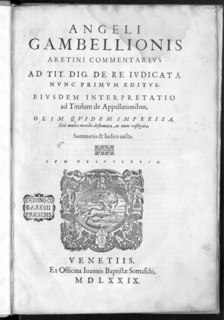 Res judicata (RJ) or res iudicata, also known as claim preclusion, is the Latin term for "a matter decided" and refers to either of two concepts in both civil law and common law legal systems: a case in which there has been a final judgment and is no longer subject to appeal; and the legal doctrine meant to bar relitigation of a claim between the same parties.

Judicial notice is a rule in the law of evidence that allows a fact to be introduced into evidence if the truth of that fact is so notorious or well known, or so authoritatively attested, that it cannot reasonably be doubted. This is done upon the request of the party seeking to rely on the fact at issue. Facts and materials admitted under judicial notice are accepted without being formally introduced by a witness or other rule of evidence, and they are even admitted if one party wishes to plead evidence to the contrary.

Pro se legal representation comes from Latin pro se, meaning "for oneself" or "on behalf of themselves", which in modern law means to argue on one's own behalf in a legal proceeding as a defendant or plaintiff in civil cases or a defendant in criminal cases.

Legal financing is the mechanism or process through which litigants can finance their litigation or other legal costs through a third party funding company.

In Canada, the rules of civil procedure are administered separately by each jurisdiction, both federal and provincial. Nine provinces and three territories in Canada are common law jurisdictions. One province, Quebec, is governed by civil law.

Reed Elsevier, Inc. v. Muchnick, 559 U.S. 154 (2010), was a decision by the Supreme Court of the United States involving copyright law. The Court held that failure to register a copyright under Section 411 (a) of the United States Copyright Act does not limit a Federal Court's jurisdiction over claims of infringement regarding unregistered works.

Justice, To Assist the Court: Third Party Interventions in the UK (2009)