Jamie Thomas (born October 11, 1974) is an American professional skateboarder and skateboard industry entrepreneur. Thomas is the owner and founder of Zero Skateboards and Fallen Footwear, until he announced its closure in January 2017. Thomas' nickname in the skateboard industry is "The Chief". [1]

Thomas grew up in Dothan, Alabama, but also spent time as a child in Atlanta, Georgia and Palm Beach Gardens, Florida for his father's work as a nuclear engineer. [2] [3] Thomas started skateboarding in Palm Beach Gardens at the age of eleven.

In 1991, Thomas won a skateboarding competition in Panama City, Florida. [4]

In 1992, Thomas left Alabama and relocated to San Francisco, California in order to pursue a career in professional skateboarding. At the time, he was sponsored by Thunder Trucks, Spitfire Wheels, Vans and as a flow rider for Real Skateboards. Thomas turned pro for a short lived brand called Experience. Thomas went on to ride for San Diego-based Invisible Skateboards. [4]

After relocating to Southern California in 1994, Thomas was featured on the cover of TransWorld SKATEboarding magazine and filmed video parts for Spitfire and Invisible. In 1995 Thomas left Invisible to join skateboarder/artist Ed Templeton at Toy Machine Skateboards. Thomas filmed and directed two Toy Machine videos, the second one being Welcome to Hell , one of the most influential skate videos of the 1990s. [5]

The Zero video Thrill Of It All featured Thomas's attempt at what would be coined "The Leap of Faith" [6] (an "ollie melon" over a handrail and down an 18-foot, 8-inch drop). The location of the "leap" was the Point Loma High School in San Diego. Although Thomas did not successfully land the trick, his attempt garnered notoriety. [4]

In a June 2014 interview with the Jenkem online publication, Thomas explained that the Dwindle Distribution skateboard company—responsible for the Enjoi, Blind Skateboards, Almost Skateboards, Darkstar and Cliché Skateboards brands—will take over "the sales, finance, production and distribution aspects" of the Zero brand, without citing a time frame. Thomas further explained that the Zero employees will remain independent and will focus on "the team, marketing and creative aspects" of the brand. [10] On June 27, 2014, two time Thrasher Magazine Skater of the Year recipient Chris Cole (He had ridden for the brand for a decade, including both of his SOTY award winning years, to say nothing of his contest dominance [Both mainstream joints like Maloof and Street League and more industry/insider licks like Back to the 'Berg) announced his departure from Zero on the social media platform Instagram, without a corresponding reason; however, a reply from the Zero Instagram account thanked Cole for his "loyalty & dedication." [11]

Thomas explained in a June 24, 2014 interview with the Active brand's online media channel that core skateboard brands will need to remain authentic to survive in the marketplace. He also revealed that he continues to enjoy the process of working in collaboration with sponsors and companies on projects, and recommended skateboarding projects to the audience for motivational benefits. [12]

In 2017, Jamie Thomas Announced on instagram that he would be joining a new footwear brand called STRAYE footwear, alongside Chad Muska and Antwuan Dixon. [13]

Thomas is married to Joanne and they have three children (Julien Tiger, born October 30, 2003, James Ruby, born March 30, 2006, and Maximus Trey, born June 11, 2008). The Thomas family resides in Encinitas, California. Thomas is a Christian, with several board graphics that feature Christian imagery and scripture. [14]

Thomas has explained that his nickname, "The Chief", was started by professional skateboarders Elissa Steamer, Erik Ellington and Jim Greco. [1]

In January 2000, Thomas appeared with Ed Templeton in a print ad for the Physicians Committee for Responsible Medicine to promote vegetarianism. [15]

Blur guitarist, Graham Coxon wrote an eponymous song in tribute to Thomas, which can be found on his solo album, "The Golden D". [16] 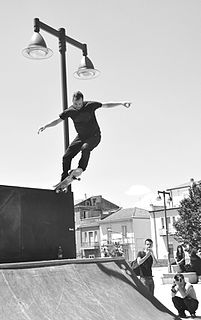 Ed Templeton is an American professional skateboarder, contemporary artist, and photographer. He is the founder of the skateboard company, Toy Machine, a company that he continues to own and manage. He is based in Huntington Beach, California.

Tom Penny is a professional skateboarder from Abingdon, Oxfordshire, United Kingdom (UK). As of January 2013, Penny is sponsored by the Flip skateboard deck brand and his Cheech & Chong signature deck is one of the brand's highest-selling deck products. 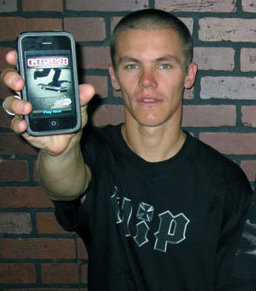 Geoffrey Joseph Rowley, Jr. is an English professional skateboarder, former co-owner of Flip Skateboards and owner of the Civilware Service Corporation. Rowley is a past recipient of Thrasher Magazine 's "Skater of the Year" award. 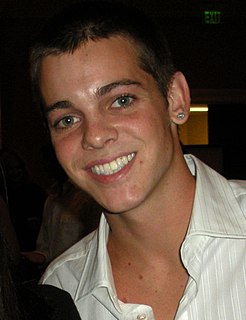 Ryan Allen Sheckler is an American professional skateboarder and entrepreneur, and was the star of the MTV-produced reality television series Life of Ryan. Sheckler was listed in Fox Weekly's "15 Most Influential Skateboarders of All-Time" article. Sheckler starred in four seasons of the short-format video series Sheckler Sessions on Red Bull TV.

Guy Mariano is a professional skateboarder who gained recognition at the age of fourteen for his video part in the Blind Skateboards video Video Days (1991).

Chad Muska is an American professional skateboarder, musician and entrepreneur. In November 2012, Skin Phillips, editor-in-chief of Transworld Skateboarding, described Muska as "one of the most marketable pros skateboarding has ever seen."

Michael Shawn Carroll is a professional skateboarder from Daly City, California, United States. He is the co-founder and vice-president of Girl Skateboards and the co-founder of Lakai Limited Footwear. He was also instrumental in the creation of the Chocolate Skateboards subdivision of Girl. Furthermore, Carroll is known for being in the vanguard of innovative, technical, and stylish street skateboarding in the early 1990s and beyond. The success of skateboarding videos like Hokus Pokus, Ban This! and Video Days firmly ensconced street as the premier variation of skating.

Zero Skateboards is a skateboard company located in Carlsbad, California, United States (US). The brand was founded by professional skateboarder and entrepreneur Jamie Thomas, and distributed by his Black Box Distribution company. In late June, 2014, Thomas announced that the brand would be distributed by the Dwindle Distribution company, based in El Segundo, California, US. Subsequently, in 2016, Thomas and Dwindle announced that Zero Skateboards would be operated independently by Thomas. 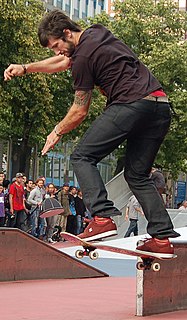 Stevie Williams is a professional skateboarder who was included in the twenty-seventh position of the "30 Most Influential Skaters of All Time" list that was compiled by Transworld Skateboarding in late 2011. 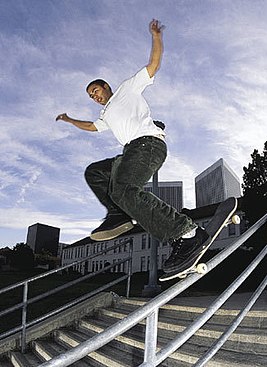 Toy Machine is a skateboarding company, housed under the Tum Yeto distribution company, started by Ed Templeton in 1993.

Michael Capaldi, popularly known as Mike Mo Capaldi, is a professional regular-footed skateboarder who gained popularity following his video part in Forecast, a video produced by professional skateboarder Paul Rodriguez. In an October 2013 video feature for the Berrics website, Capaldi revealed his transition with the 360 flip, a very difficult skateboard trick, whereby he only performs the trick in "switch" stance; that is, opposite to his natural stance.

Dirty Ghetto Kids (DGK) is an American skateboard company, producing skateboards and apparel. The brand is distributed by The Kayo Corp, a partnership that was established through Stevie Williams and Troy Morgan of The Kayo Corp.