John Corbett (born 1963) [1] is an American writer, musician, radio host, teacher, record producer, concert promoter, and gallery owner based in Chicago, Illinois. He is best known among musicians and music fans as a champion of free jazz and free improvisation. In recent years he has become known in the visual art world as well through his Corbett vs. Dempsey gallery. 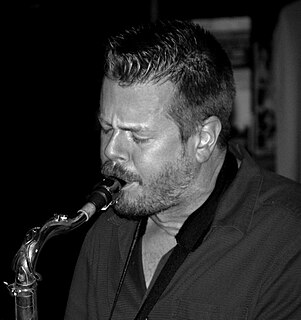 Ken Vandermark is an American jazz composer, saxophonist, and clarinetist.

The Unheard Music Series is an imprint of the American record label Atavistic Records. The series, running since 2000, is curated by Chicago writer and producer John Corbett and focuses mainly on free jazz recordings from the 1960s and 1970s. The series includes reissues of previously out-of-print recordings, notably from the catalog of the German label FMP, and also incorporates previously unreleased material. The project was conceived after Corbett received a fellowship to research material in German radio archives. An initial blurb from the label's website stated: "Drawing from radio archives, private tapes, collections of rare vinyl, and all sorts of unreleased sessions, often working hand-in-hand with the artists themselves, the series will focus on filling gaps in the historical record and illuminating otherwise dark corners of the musical continuum."

Atavistic Records is an American record label based in Chicago, Illinois, known for its no wave and free jazz recordings.

For many years he hosted a radio show on WHPK called Radio Dada. More recently, he has co-hosted a jazz show called Writer's Block on WNUR with fellow jazz writers Kevin Whitehead and Lloyd Sachs.

WHPK is an American radio station based in Hyde Park on the South Side of Chicago, established in 1968. The station is owned by the University of Chicago, and operated by volunteer students and community members. WHPK's station manager and program director are elected by the station's student members and must be students themselves. The station's broadcast engineer is paid by the university.

Kevin Francis Whitehead is an American jazz critic and author. 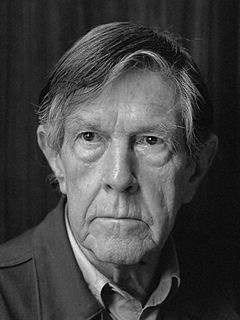 "Dr. Funkenstein" is a song by the funk band Parliament. It was the second single released from their 1976 album, The Clones of Dr. Funkenstein. It reached number 46 on the Billboard Hot Soul Singles chart. 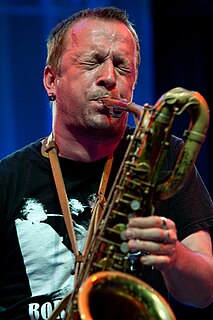 Mats Olof Gustafsson is a Swedish free jazz saxophone player. He is known for his tonal belligerence and intensity when improvising. 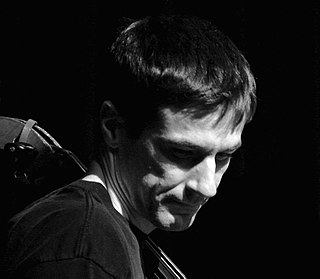 Fred Lonberg-Holm is an American cellist based in Chicago. He relocated from New York City to Chicago in 1995.

Davey J. Williams was an American free improvisation and avant-garde music guitarist. In addition to his solo work, he was noted for his membership in Curlew and his collaborations with LaDonna Smith. 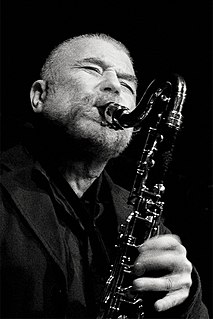 Hal Russell was an American free jazz composer, band leader and mult-instrumentalist who performed mainly on saxophone and drums but occasionally on trumpet or vibraphone. Russel's fiery music was marked by significant humor, not unlike much of Dutch drummer Han Bennink's output. His music was so accessible that People magazine hailed The Finnish Swiss Tour on ECM as one of its top 5 albums of the year. Russell set the table for the free improv and free jazz scene which exploded later in the 90's in Chicago. 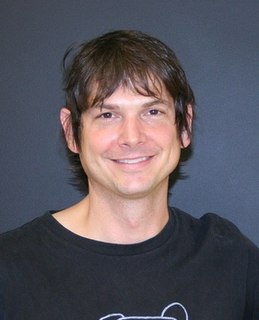 Glenn Kotche is an American drummer and composer, best known for his involvement in the band Wilco. He was named the 40th greatest drummer of all time by Gigwise in 2008.

The Triolin is an acoustic bowed metal instrument designed and built by Hal Rammel in 1991. He has described it as a nail violin gone awry. Thin metal rods sit perpendicular in a circular arrangement on the top surface of a triangular wooden resonator and the instrument is held in the other hand by an ornately carved chair leg attached to the bottom of the resonator. Thus, the rods can be bowed as the entire instrument twists and spins underneath. Several years later, when he began to experiment with amplification inspired by the live electronics of cellist Russell Thorne and the amplified table top arrays of Hugh Davies, he attached wooden rods to a flat wooden artist's palette. His amplified palette can be heard on the 1994 CD Elsewheres and, more recently, on "Like Water, Tightly Wound". In 2013 the triolin and four amplified palettes by Hal Rammel were added to the permanent collection of the National Music Museum in Vermillion, South Dakota along with many other acoustic instruments he performed with in the 1990s in Chicago.

Table of the Elements is an American record label. It concentrates on re-released and specially recorded experimental music, including many avant-garde musicians of the 20th and 21st centuries, such as John Cale, Tony Conrad and La Monte Young, as well as lesser-known artists such as Loren Mazzacane Connors, Derek Bailey, Rhys Chatham, Fushitsusha/Keiji Haino, and Mats Gustafsson.

Zu is an Italian instrumental music group from Rome. While their line-up of baritone sax, bass guitar and drums is typical of a jazz band, their hard-driving avant-garde sound is indebted to punk rock and according to AllMusic "defies easy categorization." Zu have collaborated with a wide variety of musicians and been described as "masters at adapting to their guests' musical backgrounds". 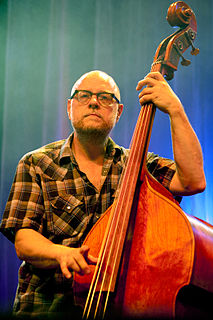 Kent Kessler is an American jazz double-bassist, best known for his work in the Chicago avant-garde jazz scene.

Sebi Tramontana is a jazz trombonist most often associated with avant-garde jazz and free improvisation music. A member of the Italian Instabile Orchestra, Tramontana has also recorded with such musical artists as Jeb Bishop, Joëlle Léandre, Mario Schiano, and Carlos Zingaro.

Tristan Meinecke (1916–2004) was an American artist, architect and musician who spent most of his life and career in Chicago. He was married to television and radio actress Angel Casey. His widely varied body of work explored abstract expressionism, cubism and Surrealism, and included the invention of the split-level painting technique. In collaboration with architect Robert Bruce Tague, Meinecke built and rehabilitated many properties in and around Lincoln Park, Chicago. 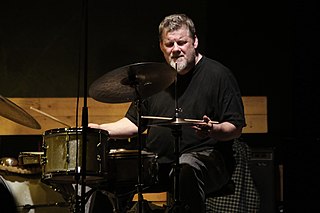 Raymond Strid is a Swedish drummer in the genre of free jazz and the new European improvised music. 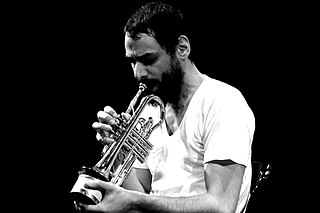 Guillermo Gregorio is an Argentine jazz and free improvisation clarinetist, saxophonist, and composer.