Jordan Izaak Pundik (born October 12, 1979) [2] is an American musician and songwriter. He is a founding member and the frontman of Floridian rock band New Found Glory, for whom he sings lead vocals and contributes lyrics. He was also the guitarist in the band's now defunct side-project, the International Superheroes of Hardcore, where he performed under the pseudonym of "Chugga Chugga".

Jordan Pundik was born in Englewood, New Jersey, to Carlos and Maureen Pundik. His family moved to Pompano Beach, Florida, when he was 3 years old. He has a brother named Daniel and a sister named Edra. He learned how to play guitar when he was 15 years old.

The origins of the band New Found Glory date back to the summer of 1997 when Pundik met Steve Klein at Marjory Stoneman Douglas High School and the pair began writing music together. Pundik later stated the band name was created whilst he and Klein were working in Red Lobster together. Pundik says, "We came up with A New Found Glory, we wrote it on a napkin. I think we pulled some of it from "A Newfound Interest in Massachusetts" by the Get Up Kids". [3] They recruited friend Ian Grushka on bass, who they had previously played with in a band named "Inner City Kids". The band practiced in Grushka's garage, and later invited Joe "Taco Joe" Marino to play drums. Shortly thereafter, Chad Gilbert (lead guitar), former vocalist of Shai Hulud, joined to complete the quintet. [3]

In addition to his work with New Found Glory, Pundik has also collaborated with many artists. His vocals also appear on the tracks "Kings of Hollywood" and "You're Not Alone" on MxPx's 2003 release Before Everything & After . He also does backup vocals for the song "Cat Like Thief" by Box Car Racer along with Tim Armstrong of Rancid. [4] Jordan also appears on the Hope After the End/A Stab In The Dark split EP with Ned Harrington. In 2004, he appeared on the Breakdance Vietnam song "Graves of Mistakes" from the album Memories of Better Days, released on Broken Sounds Records. Jordan also contributed vocals on "You're the Wanker, If Anyone Is" by Say Anything alongside bandmate Chad Gilbert. Jordan also contributed vocals on the b-side track titled "The Lost Boys" by Set Your Goals. Jordan is also featured in the band Midtown's music video "Just Rock & Roll". In 2010, Pundik collaborated with Paramore's Hayley Williams and Relient K's Ethan Luck for a punk rock cover of "The Bed Intruder Song".

In 2012 his "suburban punk" band Domestikated (consisting of himself and Relient K's Ethan Luck [5] ) released an EP called 5 Minutes in Timeout! [1] The EP also features a collaboration with Hayley Williams, on the track "What's His Name (feat. Becca)." [1]

Pundik has stated that Nirvana and Green Day are his biggest inspiration. [6]

with International Superheroes of Hardcore 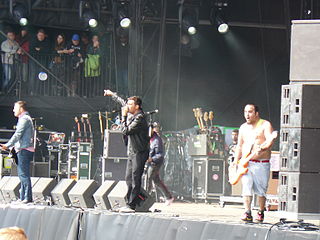 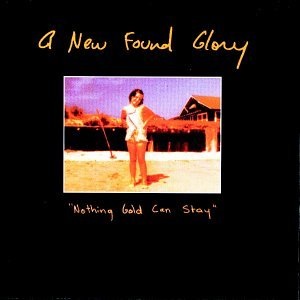 Nothing Gold Can Stay is the debut studio album by American rock band New Found Glory, released on March 18, 1999 through independent record label Eulogy Recordings. At the time, the band was then named "A New Found Glory", but later dropped the indefinite article "A" due to some fans struggling to find their records in stores. The original pressings of the album contained samplings from several films including The Outsiders (1983), Weird Science (1985), and That Thing You Do! (1996), as well as Robert Frost's poem "Nothing Gold Can Stay", after which the album is named. 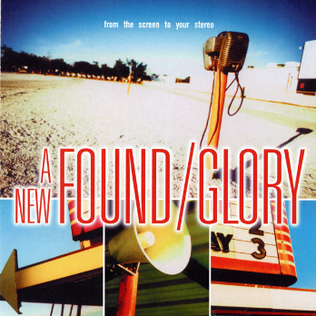 From the Screen to Your Stereo is an EP by New Found Glory released on 28 March 2000 by Drive-Thru Records. All the tracks are covers of songs from motion picture soundtracks. The album was pressed on 10" vinyl and released in three different colors: light marble blue, marble red, and white. The vinyl pressing featured a bonus track. In 2002, the album was released on a non-US split with the Japanese band Nicotine entitled Movie Addiction, where on this split, Nicotine also covered songs from movies. In 2007 the band released a follow up, this time a full-length album titled From the Screen to Your Stereo Part II.

Ian Ryan Grushka is an American musician and songwriter. He is a founding member and the bassist of Florida rock band New Found Glory. He was also the bassist in the band's now defunct side-project, the International Superheroes of Hardcore, where he performed under the pseudonym of "Sgt. Soy". 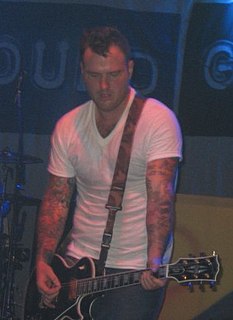 Chad Everett Gilbert is an American musician and record producer. He is a founding member of the rock band New Found Glory, for whom he plays lead guitar, sings backing vocals, and composes music. He was also the lead vocalist for New Found Glory's now-defunct side-project, International Superheroes of Hardcore. Additionally, Gilbert was the vocalist for the hardcore punk band Shai Hulud between 1995 and 1998, and he rejoined the band in 2012. 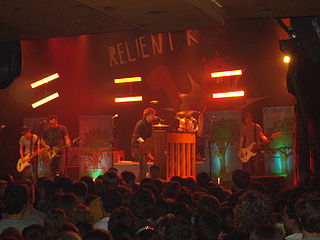 Relient K is an American rock band formed in 1998 in Canton, Ohio, by Matt Thiessen, Matt Hoopes, and Brian Pittman during the band members' third year in high school and their time at Malone University. The band is named after guitarist Hoopes' automobile, a Plymouth Reliant K car, with the spelling intentionally altered to avoid trademark infringement over the Reliant name. 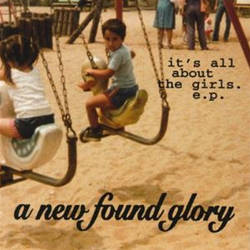 It's All About the Girls is the debut EP by New Found Glory released on December 20, 1997 by Fiddler Records. It is the only release with their original drummer Joe Marino. A re-release, featuring revised cover artwork, was issued by Fiddler in June, 2000. 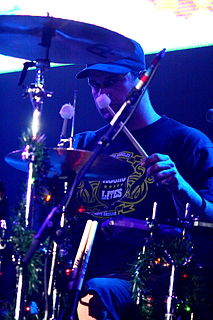 Ethan John Luck is an American musician, producer, multi-instrumentalist and photographer who has played in several bands, most prominently, the ska band The O.C. Supertones and pop punk band Relient K. He has played on albums for Demon Hunter, Kutless, Roper, Nikki Clan and Last Tuesday.

Coming Home is the fifth studio album by American rock band New Found Glory. It was produced by the band along with Thom Panunzio and released on September 19, 2006 through Geffen Records. Written and demoed at the Morning View Mansion in Malibu, California during 2005, Coming Home is lyrically themed around being away from home and loved ones. The album marks a departure from the band's earlier work, implementing a more layered and mid-tempo sound that features various piano, keyboard, and string instrumentation more comparable to classic rock than their usual pop punk style.

"It's Not Your Fault" is a song by American rock band New Found Glory, serving as the lead single from their fifth studio album Coming Home (2006). The track was first announced in July 2006, before the music video debuted on TRL on 1 August. "It's Not Your Fault" was released to radio on July 25, 2006. The song was later released to Modern Rock Radio in September, shortly before the album was released. 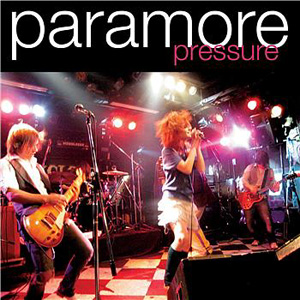 "Pressure" is a song by American rock band Paramore, released on August 2, 2005 as their debut single from their debut studio album, All We Know Is Falling. It failed to chart the Billboard Hot 100, however, it peaked at No. 62 on the Billboard Hot Digital Songs chart. On March 24, 2016, the song was certified gold by the Recording Industry Association of America (RIAA), for sales exceeding 500,000.

International Superheroes of Hardcore were a parodical hardcore punk band. 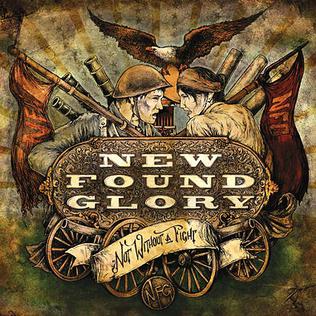 Not Without a Fight is the sixth studio album by American rock band New Found Glory. It was released on March 10, 2009 through independent label Epitaph Records. Produced by Blink-182 singer-bassist Mark Hoppus and recorded at his home based-OPRA Studios, the album was seen as a return to the band's energetic roots in comparison to its predecessor; the mellow Coming Home (2006). The gap between releases marked the longest period between studio albums in the band's career thus far, while the title is taken from the lyrics in opening track, "Right Where We Left Off".

Not Without a Heart Once Nourished by Sticks and Stones Within Blood Ill-Tempered Misanthropy Pure Gold Can Stay is a split EP by pop punk band New Found Glory and hardcore punk band Shai Hulud. This limited edition EP was only available at shows on the "Not Without a Fight" tour with New Found Glory, Bayside, Set Your Goals, and Shai Hulud. This tour spanned from March 25, 2009 to May 10, 2009. However, the EP was not available until the March 26 show in San Diego. Shai Hulud's song featured on this release originally appeared on the band's album, Misanthropy Pure. New Found Glory contributed their song, "Truck Stop Blues" to the release, featured on their last album, Not Without a Fight, produced by Mark Hoppus from Blink-182. 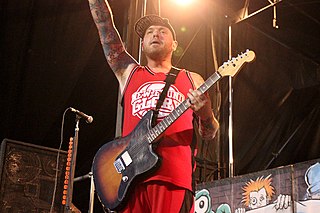 Stephen Lee "Steve" Klein is an American musician. Klein co-founded Florida rock group New Found Glory, for whom he was the primary lyricist and rhythm guitarist. 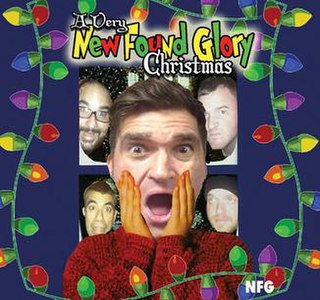 A Very New Found Glory Christmas is the third EP by American rock band New Found Glory. Self-produced by the band, it is a special edition Christmas-themed acoustic recording featuring two original songs and three covers. The EP was limited to 2,000 pressings and was released via cassette tape on December 1, 2012. 1,000 white copies were sold on tour, and 1,000 red copies were sold in their online store. The band released "Nothing for Christmas" via Rdio and Spotify on December 20, after debuting songs off the EP during the tenth anniversary tour of their Sticks and Stones album. The cover art is a parody of the 1990 blockbuster movie Home Alone. 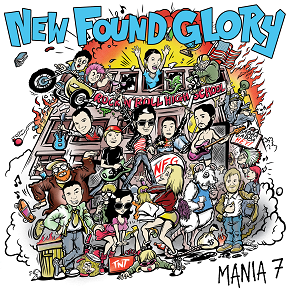 Mania is an EP of song covers by American rock band New Found Glory, released on April 29, 2013 on vinyl for Record Store Day. The EP consists of 6 covers originally performed by The Ramones. It was released digitally one week after RSD. 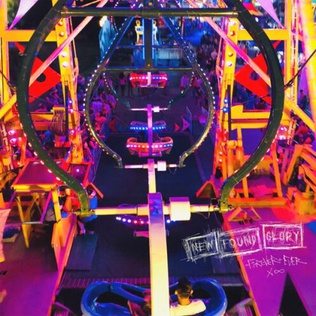