Kingfield Stadium, also known as Laithwaite Community Stadium for sponsorship reasons, is the home of Woking F.C. in the Kingfield area of Woking, Surrey which has a capacity of 6,036 of which 2,500 are seated on grandstands.

The stadium has a number of structures, built at different times during its history.

The main stand, called the Leslie Gosden Stand, is the tallest structure on the ground. It has entirely covered seating. The stand was built in 1995 [3] using financing from Woking Borough Council [3] [4] and represented the first of four phases of development. [4]

Opposite the Leslie Gosden Stand is the Kingfield Road End, which is a covered terrace. One side of the ground has two small seated stands and a small open terrace known as "moaners' corner". The other side is a long open terrace, called the Chris Lane Terrace, which is reserved for away fans when a match requires crowd segregation but can be used by anybody when there is no segregation in place. Above the Chris Lane Terrace there is a camera tower where the highlights are filmed from.

As well as hosting Woking F.C. games, matches have also been played at Kingfield by the English National Game XI and the England women's U17 team. [5] The ground also hosted an FA Women's cup semi-final in 2014. [6] 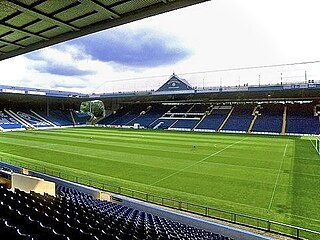 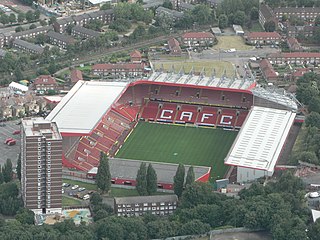 The Valley is a 27,111 capacity sports stadium located in Charlton, London, England and has been the home of Charlton Athletic Football Club since the 1920s, with a period of exile between 1985 and 1992. It is served by Charlton railway station, which is less than a five-minute walk away from the stadium. An alternative route is the Jubilee line; exiting at North Greenwich, and changing for route 161, 472 and 486 buses, which stop outside the stadium. 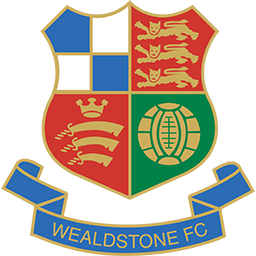 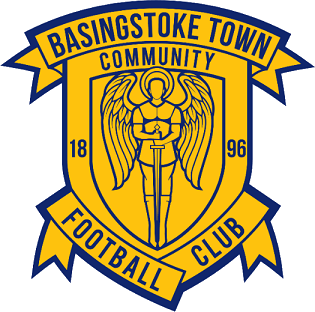 Basingstoke Town Football Club is a football club based in Basingstoke, Hampshire, England. The club are currently members of the Southern League Division One South and play at the Winklebury Sports Complex. Their motto, 'Vestigia Nulla Retrorsum', means 'Never a step backward'. 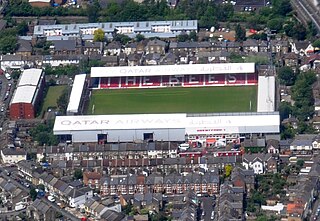 Griffin Park was a football ground in Brentford in the London Borough of Hounslow, England. It was the home ground of Brentford F.C. from its opening in September 1904 to August 2020. The ground is in a predominantly residential area and was known for being the only English league football ground to have a pub on each corner. The ground's name referred to the griffin featured in the logo of Fuller's Brewery, which at one point owned the orchard on which the stadium was built. 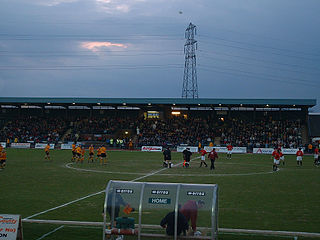 Newport Stadium, also known as Spytty Park, is an association football and athletics stadium in Newport, South Wales. It is the home of Newport City Football Club and Newport Harriers Athletic Club. It was previously also used for home matches by Newport County and Albion Rovers football clubs. Newport County continue to use the stadium as a base for youth teams and senior squad training.

Westfield Football Club is a semi-professional football club based in the Westfield area of Woking, England. The club is affiliated to the Surrey County Football Association. They are currently members of the Isthmian League South Central Division. 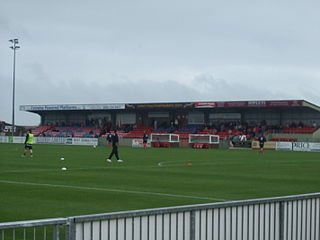 Stebonheath Park is a multi-use stadium in Llanelli, West Wales with a capacity of 3,700. It is primarily used as a football ground and is the home of Llanelli Town A.F.C.. It was also used for athletics and Llanelli Amateur Athletic Club were based at the stadium. It is owned by Llanelli Town Council. From 2015 Raiders RL club used the stadium for their debut season in the Conference League South but are now based at the park on a permanent basis as they compete in the RFL professional tier as the only professional Rugby League team in South Wales.

Boothferry Park was a football stadium in Hull, England, which was home to Hull City A.F.C. from 1946 until 2002, when they moved to the KC Stadium. 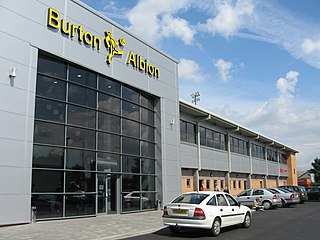 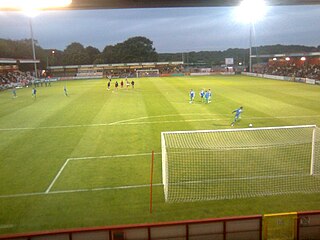 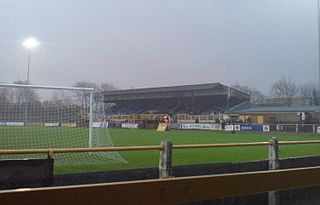 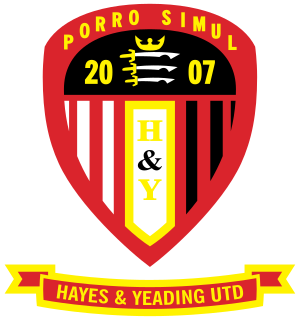 Damson Park is an association football stadium in Damson Parkway, Solihull, West Midlands, England. It was the new home of Solihull Borough following their departure from their original Widney Lane Ground. It is now the home of Solihull Moors, the club formed when Solihull Borough and Moor Green merged in 2007. They previously shared Damson Park with Birmingham & Solihull R.F.C. and also used to have an agreement that allows Birmingham City Reserves the use of the ground for their reserve games. The capacity of the stadium is 5,500.

Borough Park is a football stadium in Workington, Cumbria, England. The home ground of Workington A.F.C., it has a capacity of 3,101, of which 500 is seated.