The Klemm Leichtflugzeugbau GmbH ("Klemm Light Aircraft Company") was a German aircraft manufacturer noteworthy for sports and touring planes of the 1930s.

The company was founded in Böblingen in 1926 by Dr. Hanns Klemm, who had previously worked for both Zeppelin and the Daimler Aircraft Company. [1]

While working at Daimler, Klemm had developed his ideas for a light aircraft, to be made of wood for strength and lightness. It should be easy to manufacture, aerodynamically efficient with low mass and wing loading, for which a low-powered engine would be sufficient. Klemm's first design, the Daimler L.15, was a light aircraft with a single 7.5 hp (5.5 kW) Indian motorcycle engine. This aircraft flew in early 1919, although a 12 hp (8.8 kW) Harley-Davidson engine was used instead of the originally-envisioned engine.

Klemm then designed a squared-off version of the cylindrical fuselage of the L.15, which could be more easily built, which he designated the L.20, and he founded his own company to produce it. This aircraft, of which more than 100 were built, was powered by a 20 hp (15 kW) Daimler engine designed by Ferdinand Porsche.

In 1928 Friedrich Karl von Koenig-Warthausen made a solo flight to Moscow in a Klemm L.20, then decided to keep on going, circumnavigating the world and earning himself the Hindenburg Cup, the highest German honour for aeronautical achievement. [2]

From the L.20 was developed the Klemm L.25, later redesignated the Kl 25. Capable of being fitted with fourteen different engine types, over 600 were sold, and licenses to manufacture them were issued in Great Britain and the United States.

In January 1930 Mohamed Sidki flew from Berlin to Cairo, Egypt in a Klemm L25a. He landed in Cairo on 26 January, becoming a political hero by defying the British authorities who had denied him permission to land (he became known as The First Egyptian Eagle). Sidki wrote a letter to Klemm, who had helped outfit the plane for the long journey, stating "your beautiful little machine, the L25a has carried me through wind, snow and torrential rain without any damage to myself, the plane and the engine."

In 1931 Elly Beinhorn became the second woman to fly from Europe to Australia flying a Klemm Kl 26 equipped with an Argus engine, and winning the Hindenburg Cup.

Klemm suffered a setback in 1935 when the prototype Kl 35 crashed during testing at Rechlin. This was explained as a material defect, but was more likely due to overstressing of the wings. Klemm revised and brought the Kl 35 up to the required specifications and manufacturing began. Around 2,000 of the aircraft were built, both at Klemm's plant, and by Fieseler, and later by the Czech company Moravan Otrokovice, for the Luftwaffe as a trainer. During World War II Klemm produced and designed a range of aircraft, such as the Klemm Kl 105, Kl 106 and Kl 107, as well as the Klemm Kl 151 and Kl 152.

The Klemm Aircraft Company was refounded in 1952 after the post-war ban on aircraft construction was lifted. Klemm himself by this time was semi-retired, and the company was run by his son Hanns-Jürgen Klemm. This company's first model, Kl 107-A, made its maiden flight in mid-1956. In April 1959, Bölkow took over Klemm, and with the successor of the Kl 107-C named the Bölkow 207, the name of Klemm disappeared from the list of aircraft manufacturers. 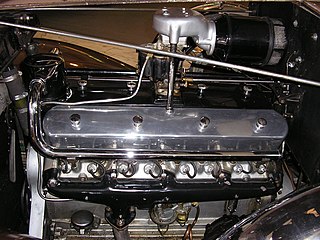 A V16 engine is a sixteen-cylinder piston engine where two banks of eight cylinders are arranged in a V configuration around a common crankshaft. V16 engines are less common than engines with fewer cylinders, such as V8 and V12 engines.

Friedrich Karl Richard Paul August Freiherr Koenig von und zu Warthausen was a German aviator who made the first solo flight around the world in 1928–1929. His flight took him eastwards from Berlin to Moscow, then to the Persian Gulf, across northern India and to Siam. He travelled mostly by ship to China and Japan, then across the Pacific Ocean. After flying across the United States, he again took a ship back to Europe, ending his flight in Hanover after 15 months. For this feat he was awarded the Hindenburg Cup.

The Klemm Kl 35 is a German sporting and training aeroplane developed as a successor to the Kl 25. A product of Klemm Leichtflugzeugbau Gmbh it shared the same single-engine, cantilever low-wing configuration as the earlier machine, the major difference being the introduction of an inverted gull wing. 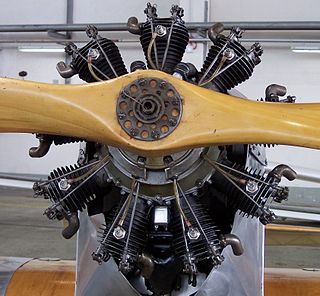 Between 1920 and 1951 the Société des Moteurs Salmson in France developed and built a series of widely used air-cooled aircraft engines.

The Klemm Kl 151 was a German prototype light passenger aircraft designed by Dr. Hanns Klemm and chief engineer Carl Bucher during World War II. Only one model was built. 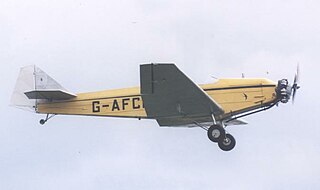 The B.A Swallow was a British light aircraft of the 1930s. It was a license-built version by the British Klemm Aeroplane Company of the German Klemm L.25. A total of 135 were built. 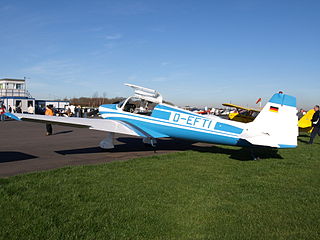 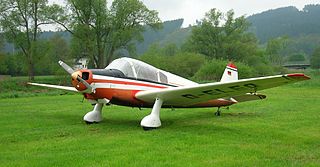 The Klemm Kl 107 was a two-seat light aircraft developed in Germany in 1940. It was a conventional low-wing cantilever monoplane of wooden construction with fixed tailwheel undercarriage. Wartime production totalled only five prototypes and some 20 production machines before the Klemm factory was destroyed by Allied bombing. Following World War II and the lifting of aviation restrictions on Germany, production recommenced in 1955 with a modernised version, the Kl 107B, of which Klemm built a small series before selling all rights to the design to Bölkow. This firm further revised the design and built it as the Kl 107C before using it as the basis for their own Bo 207.

Klemm L 25, later Klemm Kl 25 was a successful German light leisure, sports and training monoplane aircraft, developed in 1928. More than 600 aircraft were built, and manufacturing licenses were sold to the United Kingdom and the United States.

The Klemm Kl 36 is a 1930s German four-seat cabin touring and competition monoplane. It was designed by Klemm and Friedrich Fechner and built by Klemm.

The Siebel Si 202 Hummel ("Bumble-bee") was a German light sportsplane of the late 1930s. It was an angular low-wing monoplane, which could be powered by a variety of small engines. 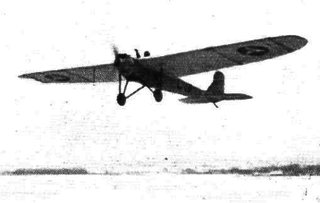 The Daimler L15, sometimes later known as the Daimler-Klemm L15 or the Klemm-Daimler L15 was an early two-seat low-powered light aircraft intended to popularise flying. In mid-career it flew as a glider.

The Daimler L20, later known as the Klemm-Daimler L20, was one of the first light aircraft to be built in significant numbers. A two-seater with an engine of only 20 hp (15 kW), it demonstrated the ability of a small aircraft to cope with flights over the Alps in winter and to make transcontinental journeys of over 36,000 km.

The Daimler L21 or Daimler-Klemm L21 was a light twin engined, single seat, parasol winged sports aircraft built in Germany. It was the winner in the lowest powered class of the Round Germany Flight contest of 1925. 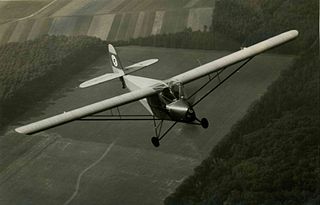 The Volksflugzeug was a grand Third Reich scheme for the mass-production of a small and simple airplane in the 1930s. It was one of the attempts of the Nazi regime to use consumer technologies as a propaganda tool. Unlike the Volkswagen car, the showpiece of the Nazi's attempt to appear to work for the good of the average German, as well as the less-known Volksempfänger radio, the Volkskühlschrank refrigerator and the Volksgasmaske gas mask, the Volksflugzeug project was contemplated but never fully realized.

The Argus As 17 was an air cooled six-cylinder in-line aircraft engine designed by the German engineering company Argus Motoren in the 1930s. Developed from the same company's smaller As 8, the engine was produced in ratings between 200 and 280 hp. First demonstrated in 1934, it powered a number of competitors at the Challenge International de Tourisme that year, including the Messerschmitt Bf 108. Argus produced it in small numbers as German manufacturers like Messerschmitt preferring V-8 alternatives for their aircraft.