Koen Wauters was born in Halle in 1967. Together with his three brothers and two sisters he spent his youth in Sint-Genesius-Rode. In his youth, Koen Wauters was a keen footballer, but all dreams of a possible pro career ended when he suffered from repeated knee injuries.

In 1987, Koen and his brother Kris joined the local band Clouseau. Koen became the frontman and singer of the band. The band and Koen became household names in Flanders in 1989, when the single Anne became a huge hit. Over the next twenty years, Clouseau became the most popular band in Flanders.

Koen Wauters started his career as a TV presenter in 1989, as one of the first faces for the new Flemish TV station vtm. He has presented shows like De Super 50 (a hitparade show), Familieraad , Wedden dat? , 1 tegen 100 and Op zoek naar Maria .

Together with his brother Kris Wauters, also a member of Clouseau, he presented all three seasons of the Flemish version of Pop Idol , Idool 2003, Idool 2004 and Idool 2007. He also hosted X Factor (Belgium) in 2005. Since 2011, he has been one of the coach in The Voice van Vlaanderen, and sInce 2012, he has been presenting Belgium's Got Talent on vtm.

The main hobby of Koen Wauters is race car driving. He has competed in the Dakar Rally 11 times, and finished 9 times. [1] Together with his brother Kris, he competes in the Belgian GT Championship. His first win in this championship was at the Spa-Francorchamps circuit on 10 May 2009. [2]

It is a little-known fact that Koen Wauters also participated as a co-driver on the Legend Boucles de Spa, both 2010 and 2011. He was co-driver to Marc Duez, another well-known Belgian racing driver for the FSE-team, [3] together with other legendary drivers such as Ari Vatanen, Robert Droogmans and Jacques Castelein.

Wauters made one appearance in the NASCAR Whelen Euro Series in 2018 at the season finale round at Circuit Zolder. He drove for PK Carsport in the No. 24 entry, substituting for Anthony Kumpen who had been suspended earlier in the year by the Royal Automobile Club of Belgium for failing a drug test during the 2018 24 Hours of Zolder. [4]

After earlier relations with Babette van Veen and Dagmar Liekens, Koen Wauters met then MTV-presenter Carolyn Lilipaly in June 1998. They married on 22 December 1998, and divorced in 2001.

Koen Wauters is also an ambassador for Plan Belgium. [5]

Meise is a municipality located in the Belgian province of Flemish Brabant. The municipality comprises the towns of Meise proper and Wolvertem, and, several smaller villages like Sint-Brixius-Rode, Oppem, Meusegem, Impde/Imde, Rossem, Westrode and quarters as Bouchout, Nerom and Slozen. As of January 1, 2006, Meise had a total population of 18,464. The total area is 34.82 km² which gives a population density of 530 inhabitants per km². 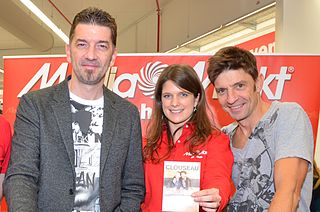 VTM or Vlaamse Televisie Maatschappij is the main commercial television station in Flanders and forms part of a network of channels owned by DPG Media.

The TMF Awards were an annual television awards show broadcast live on TMF.

X Factor was the Flemish version of the British show The X Factor, created by Simon Cowell. The new X Factor series was a successor to Idool which features contestants & jury members from both seasons. 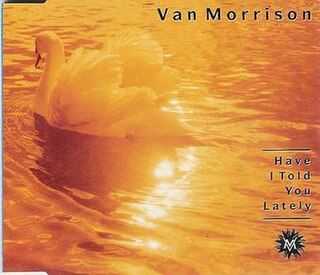 Wauters is a Dutch-language patronymic surname most common in Flanders and may refer to:

Kris Wauters is a Flemish artist, active with the band Clouseau combined with his brother Koen Wauters. 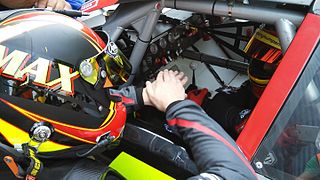 Anthony Kumpen is a Belgian professional racing driver and team manager. Kumpen currently works as the team manager for PK Carsport in the NASCAR Whelen Euro Series. He previously competed full-time in the NASCAR Whelen Euro Series, winning the championship twice in 2014 and 2016. He also joint-held the record of the most 24 Hours of Zolder wins with six. 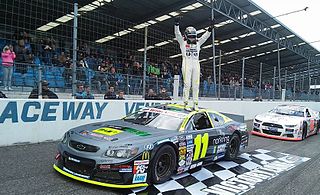 Stienes Longin is a Belgian professional racing driver. Longin currently competes in the NASCAR Whelen Euro Series driving the No. 11 Chevrolet Camaro for PK Carsport in the Elite 1 class and in Belcar Endurance Championship driving the No. 11 Norma M20 FC for Krafft Racing. He previously won the Euro Series Elite 2 championship in 2016. He is also a one-time winner at the 24 Hours of Zolder, having scored his first overall victory in 2019. He is the son of former FIA GT driver Bert Longin.

Pekaracing NV, competing as PK Carsport, is a racing team that currently competes in the NASCAR Whelen Euro Series as well as the Belcar Trophy in conjunction with Russell Racing. The team has previously competed in other series such as the FIA GT Championship.

Belgium's Got Talent is the Dutch language format of the Got Talent series, which was created by Simon Cowell, who also created the series The X Factor. It is broadcast on the Flemish language channel VTM, and is hosted by Koen Wauters and Laura Tesoro.