Idool 2004 was the second season of the Flemish version of the Idol series. It was won by Joeri Fransen, who could not follow the footsteps of former winner Peter Evrard and only release one album before he was dropped by his record company. However, second runner-up Sandrine Van Handenhoven, who was a longtime favorite throughout the season above the winner and the runner-up, enjoyed an ongoing success as a singer as well as the host of the Flemish Big Brother programme and therefore is now considered as the unofficial winner of Idool 2005 as she almost represented Belgium in the Eurovision Song Contest in 2008, coming in close 2nd in the national final. Laura Ramaekers has already been a semifinalist on Idool 2003 .

The second season of Swedish Idol premiered in August 2005 and continued until its grand finale on 2 December, when 17-year-old Agnes Carlsson from Vänersborg was crowned winner. The series was the first to crown a female Idol and is to date the sole season to be won by either a public or judges' wildcard contestant. Of the over 120 Idol winners worldwide, Carlsson is one of only three who gained a place in the finals as a judges' wildcard. The others are 2003 Canadian Idol winner Ryan Malcolm and 2007 Australian Idol winner Natalie Gauci. Carlsson has since become the most successful recording artist in the show's history.

The first season of Canadian Idol debuted on June 9, 2003. Ryan Malcolm of Kingston, Ontario was the eventual winner.

Melissa O'Neil won the title of the first female Canadian Idol and the youngest Idol ever in Canada in 2005, beating runner-up Rex Goudie.

The first season of Deutschland sucht den Superstar premiered on 24 November 2002 and continued until 8 March 2003. It was won by Alexander Klaws. The season was co-hosted by Michelle Hunziker and Carsten Spengemann. 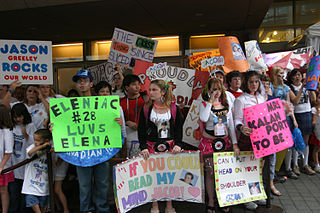 The second season of Canadian Idol debuted on June 1, 2004, and became the most watched show in Canada, drawing in over 3 million viewers each week.

The second season of Deutschland sucht den Superstar premiered on September 2003 and continued until 13 March 2004. It was won by Elli Erl. The season was co-hosted by Michelle Hunziker and Carsten Spengemann.

Idols 3 was the third season of the Dutch version of Idols hosted by Martijn Krabbé & Chantal Janzen. The winner was Raffaëla Paton with Floortje Smit as runner-up.

The second and most recent series of British reality television show Pop Idol aired on ITV on from 13 September to 20 December 2003. Michelle McManus was announced as the winner and received a £1 million recording contract to release her debut album. Ant & Dec returned to present the show on ITV, whilst Simon Cowell, Neil Fox, Nicki Chapman and Pete Waterman all returned as judges.

Idols South Africa II was the third season of South African reality interactive talent show based on the British talent show Pop Idol. It was aired from June 2003, exactly one year after the first season ended, to October of the same year. With Colin Moss and Letoya Makhene new hosts were introduced and half of the judging panel was replaced as Mara Louw and Gareth Cliff replaced Penny Lebyane and Marcus Brewster. The number of finalists was increased to 12 but only two male contestants made it through the semifinal group of the top 32: Jacques Terre'Blanche and Wafeeq Saffodien who both eventually managed to reach the top 5. Originally chosen as a wildcard winner, Francisca Blasisch suddenly quit and was replaced by Khwezi Kekana in the top 12 where she was voted off in the first liveshow. Due to technical issues the voting was voided in the week of 28 September were the contestants where singing songs by John Lennon and Paul McCartney and nobody was sent home that week. On 20 October 2003 Anke Pietrangeli, who was nicknamed The Kimberley Diamond by her supporters, won over fellow-finalist Poseletso Sejosingoe in the Gold Reef City Hippodrome Theatre.

Idol: Jakten på en superstjerne 2004 was the second season of Idol Norway based on the British singing competition Pop Idol. It premiered one year after the first season and was aired in the first half of 2004.

Idol: Jakten på en superstjerne 2006 was the fourth season of Idol Norway based on the British singing competition Pop Idol. It premiered one year after the third season and was aired in the first half of 2006.
Kåre Magnus Bergh remained as the co-host of Solveig Kloppen who was pregnant during the show. Between March 3 and April 27 she was replaced by the following : Berte Rommetveit, Guri Solberg, Sandra Lyng Haugen, Marion Ravn and Silje Stang who each hosted one show next to Bergh. Tone-Lise Skagefoss and Tor Milde remained as judges and were joined by Amund Bjørklund and Hans Olav Grøttheim.
Aleksander Denstad With auditioned with his girlfriend Vivian Sørmeland. The two of them were lead singers of the unsigned project WimpyLine. Both managed to advance through the semifinals to the top 12 and while Sørmeland placed third her boyfriend Width went on winning the entire show making him the youngest winner of the show. Peaking at no. 4 in Norway, first album coming home also managed to become a success in Japan.

Idol: Jakten på en superstjerne 2007 was the fifth season of Idol Norway based on the British singing competition Pop Idol. In difference to other seasons it was aired in the second half of the year running from September to December 2007.
After a two-year absence Jan Fredrik Karlsen returned to the judging panel as the foreperson. He was joined by Asbjørn Slettemark, Benedicte Adrian and Mariann Thomassen. Also the two hosts were new to the show in person of Marte Stokstad and Kyrre Holm Johannessen.
The Age limit to audition was raised from 28 to 35. Eventual winner Glenn Lyse profited from that rule as he was 33 at the time of his win which also made him the oldest winner of the Idol series worldwide. Lyse beat Bjørn Johan Muri, who was half his age (17), at the final with 56%. However, in a long run the runner-up once again proved to be more successful: In 2010, Muri took part in the Norwegian qualification for the Eurovision Song Contest 2010, with the song "Yes Man". Here he qualified for the final, where he finished fourth overall. Despite that, the single still became a #1 hit in Norway.

Idols 2 was the second season of the Dutch version of Idols hosted by Reinout Oerlemans & Tooske Ragas. The winner was Boris Titulaer with Maud Mulder as runner-up.

The ninth season of the Dutch reality singing competition The Voice of Holland premiered on 2 November 2018 on RTL4. Hosts Martijn Krabbé, Wendy van Dijk, and Jamai Loman as well as three season 8 coaches, Waylon, and Ali B and Anouk all returned, while Sanne Hans was replaced with Lil Kleine.