Kyu Sakamoto Memorial Best is an album by Kyu Sakamoto released in 2005 by EMI in the UK. The songs are the best known of Sakamoto's career.

Kyu Sakamoto was a Japanese singer and actor, best known outside Japan for his international hit song "Ue o Muite Arukō", which was sung in Japanese and sold over 13 million copies. It reached number one in the United States Billboard Hot 100 in June 1963, making Sakamoto the first Asian recording artist to have a number one song on the chart. Sakamoto, along with 519 other passengers on the flight, was killed in the crash of Japan Airlines Flight 123 on 12 August 1985; the deadliest single-aircraft accident to date.

EMI Group Limited was a British Transnational conglomerate founded in March 1931 in London. At the time of its break-up in 2012, it was the fourth largest business group and record label conglomerate in the music industry, and was one of the big four record companies ; its labels included EMI Records, Parlophone, Virgin Records, and Capitol Records, which are now owned by other companies. 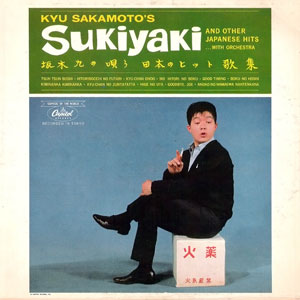 Sukiyaki and Other Japanese Hits is an album by Kyu Sakamoto released in 1963 in the U.S. by Capitol Records. All of the songs on the album are sung in Japanese and feature the title track, a #1 hit in the U.S. for three weeks in 1963, and peaking at #6 in the UK when issued by EMI on its HMV label. The 'b'-side, "Anoko No Namaewa Nantenkana", and a cover of "Good Timin'", a hit in 1960 for R&B singer Jimmy Jones, in both the US and the UK.

Hanako Oshima is a Japanese singer and the daughter of actress Yukiko Kashiwagi and singer Kyu Sakamoto.

Yukiko Kashiwagi is a Japanese actress and the wife of Japanese singer Kyu Sakamoto from 1971 until his death in 1985. In the 1970s, Kashiwagi retired from her career as an actress and instead presented a series of welfare performances with her husband in children's homes and nursing homes, and on Japanese television.

Ue o Muite Arukō: Sakamoto Kyu Monogatari/Walking while Looking Up - The Kyu Sakamoto Story (上を向いて歩こう-坂本九物語) is a biography based on the Japanese singer Kyu Sakamoto's life. The movie was first broadcast on TV Tokyo on August 21, 2005 as a commemoration of the 20th anniversary of Sakamoto's death. Kyu Sakamoto CD & DVD The best, is a Japanese album with 13 songs performed by Kyu Sakamoto and recorded by Toshiba EMI. A DVD with a live performance with Kyu Sakamoto also follows with the CD. 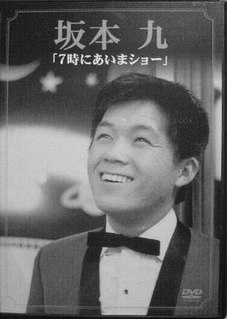 6980 Kyusakamoto, provisional designation 1993 SV1, is a stony Koronis asteroid from the outer region of the asteroid belt, approximately 9 kilometers in diameter. It was discovered by Japanese astronomers Kin Endate and Kazuro Watanabe at Kitami Observatory on 16 September 1993. The asteroid was named after Japanese singer Kyu Sakamoto.

"Miagete goran yoru no hoshi wo" is a 1963 hit song performed by a Japanese singer Kyu Sakamoto. It was written by lyricist Rokusuke Ei and composer Taku Izumi. Izumi won the Japan Record Award. The song was originally written for a musical of the same title in 1960.

Mariko Takahashi is a Japanese female singer. She is known for her ballad pop songs. She began her singing career in 1973 singing covers, but soon progressed to writing her own songs. She is also able to play piano and saxophone.

Seishiro Kato is a Japanese actor.

Robotan (ロボタン) is a Japanese anime and manga series created by Kenji Morita. The series revolves around household robot Robotan, who is created By Kan-chan and lives with an everyday Japanese family as a domestic servant and friend to the children. Like Doraemon, his good intentions don't always work out, with comic consequences. The original series was produced by Daiko Advertising. Production moved to Tokyo Movie Shinsha for the 20th-anniversary color remake New Robotan (1986) under director Masaharu Okuwaki.

Kim Kyu-eun (Hangul:김규은) is a South Korean pair skater. With her skating partner, Alex Kang-chan Kam, she competed in the free skate at the 2017 Four Continents Championships.