La Quadrature du Net ( Squaring the Net in French) is a French advocacy group that promotes digital rights and freedoms for its citizens. [1] It advocates for French and European legislation to respect the founding principles of the Internet, most notably the free circulation of knowledge. La Quadrature du Net engages in public-policy debates concerning, for instance, freedom of speech, copyright, regulation of telecommunications and online privacy.

The name of the group is based on squaring the circle (French : quadrature du cercle), an unsolvable mathematical problem. According to the collective, it is "impossible to effectively control the flow of information in the digital age by law and technology without harming public freedoms and damaging economic and social development". [2] The collective makes an analogy with the squaring of the circle as a problem that could take ages for people to realize is impossible to solve, as initially intended. [3]

In 2013, the collective re-organized from a de facto association to a formal (French law) association. This association was founded by 9 long-time participants or helpers of the initial collective. [6]

Philippe Aigrain, author of two books on information commons, is one of the co-founders of the collective and the association. Jérémie Zimmermann, also co-founder of both collective and association, is frequently invited to television programs and interviews, defending and raising awareness about the association's positions and opposition to the many projects they consider threaten fundamental liberties and the Internet (French HADOPI law, European Telecoms Package, ACTA, Net Neutrality, etc. [7]

La Quadarature du Net gained notoriety by fighting the HADOPI law, a controversial project to establish a graduated response in France. [8] Its action against Internet censorship and Net neutrality led the Quadrature to work on subjects such as the LOPPSI law, the Telecoms Package or ACTA. In 2012 Quadrature spokesman and co-founder Jérémie Zimmermann received a Pioneer award for his action against ACTA. [9]

The Quadrature is supported by other advocacy and free software groups, including the Electronic Frontier Foundation and the Free Software Foundation. [10] 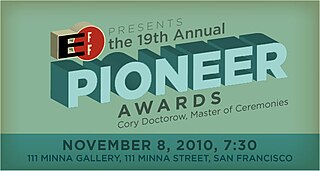 Center for Democracy & Technology (CDT) is a Washington, D.C.-based 501(c)(3) nonprofit organization whose mission is to strengthen individual rights and freedoms by defining, promoting, and influencing technology policy and the architecture of the Internet.

The Blue Ribbon Online Free Speech Campaign is an online advocacy campaign for intellectual freedom on the Internet, orchestrated by the Electronic Frontier Foundation (EFF). Web site owners are encouraged to place images of blue ribbons on their sites and link to EFF's campaign. This is done so that they can help spread awareness of the threats to unrestricted speech in new media. 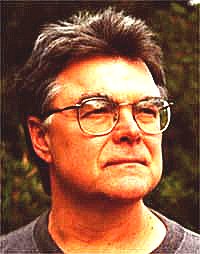 Jon Lebkowsky is a web consultant/developer, author, and activist who was the co-founder of FringeWare Review. FringeWare, an early attempt at ecommerce and online community, published a popular "magalog" called FringeWare Review, and a literary zine edited by Lebkowsky called Unshaved Truths. FringeWare's email list, called the FringeWare News Network, established an international following for the organization, which also opened a store in Austin, Texas.

European Digital Rights (EDRi) is an international advocacy group headquartered in Brussels, Belgium. EDRi is a network collective of NGOs, experts, advocates and academics working to defend and advance digital rights across the continent. For almost two decades, it has served as the backbone of the digital rights movement in Europe. In March 2021, EDRi is made of 44 NGOs, as well as experts, advocates and academics from all across Europe. 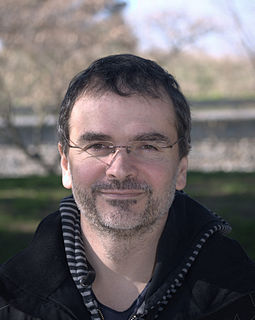 Loïc Dachary is a French free software developer and activist who has been active since 1987. Dachary currently contributes to free software projects and acts as president of the Free Software Foundation in France. He is a speaker for the GNU Project and the April association. Right now, he is a full-time volunteer for the SecureDrop project.

Internet censorship in Morocco was listed as selective in the social, conflict/security, and Internet tools areas and as no evidence in the political area by the OpenNet Initiative (ONI) in August 2009. Freedom House listed Morocco's "Internet Freedom Status" as "Partly Free" in its 2018 Freedom on the Net report.

Switzerland is an open-source network monitoring utility developed and released by the Electronic Frontier Foundation (EFF). Its goal is to monitor network traffic between two systems running the program to see if the user's Internet service provider is violating network neutrality, like Comcast did in 2007 with the BitTorrent protocol.

The Telecoms Package was the review of the European Union Telecommunications Framework from 2007 – 2009. The objective of the review was to update the EU Telecoms Framework of 2002 and to create a common set of regulations for the telecoms industry across all 27 EU member states. The review consisted of a package of directives addressing the regulation of service provision, access, interconnection, users' contractual rights and users' privacy, as well as a regulation creating a new European regulatory body (BEREC).

The French HADOPI law or Creation and Internet law was introduced during 2009, providing what is known as a graduated response as a means to encourage compliance with copyright laws. HADOPI is the acronym of the government agency created to administer it.

The Free Culture Forum (FCForum) is an international encounter of civic society actors on free culture, digital rights and access to knowledge. It has been taking place in Barcelona every year since 2009. It takes place jointly with the oXcars, a free culture festival.

Jean-Baptiste Soufron, born 6 April 1978, is a lawyer and writer in Bordeaux, France. He has been an advisor to the French government and the former general secretary of the French National Digital Council (2012–2015).

Marvin Ammori is a lawyer, civil liberties advocate, and scholar best known for his work on network neutrality and Internet freedom issues. He currently serves as Chief Legal Officer of Uniswap.

There is medium internet censorship in France, including limited filtering of child pornography, laws against websites that promote terrorism or racial hatred, and attempts to protect copyright. The "Freedom on the Net" report by Freedom House has consistently listed France as a country with Internet freedom. Its global ranking was 6 in 2013 and 12 in 2017. A sharp decline in its score, second only to Libya was noted in 2015 and attributed to "problematic policies adopted in the aftermath of the Charlie Hebdo terrorist attack, such as restrictions on content that could be seen as ‘apology for terrorism,’ prosecutions of users, and significantly increased surveillance."

Sampsa is a pseudonymous Finnish street artist, political activist, and painter, whose known works have appeared in Helsinki, Palermo, New Orleans, and Paris. Referred to as the 'Finnish Banksy', his works have at times been mistaken for Banksy's. Sampsa's work is distinguished for its focus on political activism, launching citizen's initiatives as an integral component of his work. He has also innovated in the creation of removable street art, painting on tiles and canvases made of industrial fabrics, and mounting them on the street. Sampsa's first known public artworks emerged in Helsinki, and coincided with his starting a Finnish popular movement for a more fair copyright law.

Nikhil Pahwa is an Indian journalist, digital rights activist, and founder of MediaNama, a mobile and digital news portal. He has been a key commentator on stories and debates around Indian digital media companies, censorship and Internet and mobile regulation in India. He is the founder of 'Save the Internet' that was instrumental in successfully opposing Facebook's Free Basics programme in India on the basis that it limited competition and violated net neutrality. Pahwa, along with some volunteers of 'Save the Internet' founded the Internet Freedom Foundation in 2016. Pahwa resigned from the Internet Freedom Foundation in 2018.