The Leeds Cup is a golf tournament that has been played annually in northern England since 1902. The event is organised by the north region of the Professional Golfers' Association. It is the oldest trophy in professional golf that is still played for. The Tooting Bec Cup is older, having been first played for in 1901, but is no longer contested. [1]

The Leeds Challenge Cup was first contested in May 1902 at Leeds Golf Club. The trophy was presented by Alderman Penrose-Green, Lord Mayor of Leeds and President of Leeds Golf Club to be competed for annually by professional golfers. [2] Harry Vardon was the first winner. [3] 2015 marked the 100th staging of the event. [3]

The Northern Counties Professional Golfers' Association was formed as a result of a meeting in Leeds on 9 January 1902. [4] At a subsequent meeting, also in Leeds, on 24 March it was decided that, subject to certain conditions, it would amalgamate with the London-based Professional Golfers' Association and become the northern section of the new enlarged association. [5] The same meeting also agreed to accept an offer from the Leeds Golf Club to host a tournament on 6 May at which the club would provide a prize. [5]

The tournament was contested over 36 holes of stroke play, on a single day. The winner received the Challenge Cup, a memento and the first of six small prizes. There was also a prize for the first apprentice. [6] It was the third tournament organised by the PGA with the Tooting Bec Cup having been contested in October 1901, followed by a tournament at Royal Mid-Surrey Golf Club on 23 April 1902. [7]

The weather on 6 June was wintry and the professionals had to play in a blinding hailstorm which also made putting difficult. 26 professionals entered included three times Open Champions J.H. Taylor and Harry Vardon and Sandy Herd, twice runner-up in the Open. James Braid was absent, having a prior engagement. Vardon won the cup with score of 149, his second round 73 being the best of the day. Herd and Taylor tied for second place on 153. Bertie Snowball, then a young professional at Bradford, won the apprentice prize. 21 of the 26 players returned scores for the two rounds. Mrs Penrose-Green presented the cup to Vardon and Taylor made a short speech thanking the members of the Leeds club. [6]

Alexander "Sandy" Herd was a Scottish professional golfer from St Andrews. He won The Open Championship in 1902 at Hoylake.

The British PGA Matchplay Championship was a match play golf tournament that began in 1903 and ran until 1979. Between 1903 and 1969, the event was sponsored by the now defunct British newspaper the News of the World, and was commonly known by the paper's name. Initially organised as the championship of British professionals, the event came to include invited players from other countries – in particular from around the Commonwealth. On occasion, American professionals also took part, notably in 1949 when eight members of the victorious U.S. Ryder Cup side accepted invites to the event, Lloyd Mangrum reaching the semi-finals.

Malcolm Edward Gregson is an English professional golfer. After a promising start to his career as an amateur and assistant professional, he had one exceptional year, 1967, when he won the Harry Vardon Trophy and played in the Ryder Cup, but had only limited success afterwards. After reaching 50 he played on the European Senior Tour, winning five times. 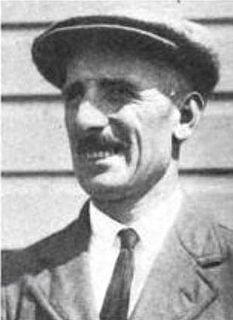 Charles Henry Mayo was an English professional golfer of the early 20th century. Mayo won the 1911 Belgian Open held at the Royal Golf Club of Belgium. Frenchman Arnaud Massy finished in second place. He had seven starts in the Open Championship, his best finish being T11 in 1912. He finished runner-up in the 1908 French Open and had five international appearances representing England against Scotland.

The Northern Professional Championship was a professional golf tournament played in Northern England. The event was generally a regional tournament but from 1923 and 1927 and in 1936 it was an open event with significant prize money.

The Penfold Professional Golf League was a professional golf tournament played in England. The event was held twice, in 1938 and 1939. It was contested by 12 players, each playing the other in a round robin format. Everyone played two matches per day for the first five days and another match on the final day, a Saturday. Two points were awarded for a win and one point for a halved match. Total prize money was £1,000 with £200 for the winner. The tournament was sponsored by Penfold Golf.

The Sphere and Tatler Foursomes Tournament was a professional golf tournament played annually from 1911 to 1914. Total prize money was £350 provided by the owners of The Sphere and The Tatler. The winners received individual silver trophies. It followed a similar format to that used for the popular News of the World Matchplay except that it was a foursomes event rather than singles.

Bertie Snowball was an English professional golfer who played in the early 20th century. He was at his peak as a player from 1904 to 1908 but was still competitive as late as 1914. He was killed in 1915 during World War I.

William Henry Davies was an English professional golfer. He finished in the top 10 in the Open Championship four times. He played in the 1931 and 1933 Ryder Cups.

Frank Jowle was an English professional golfer. His best season was 1958 when he won the Spalding Tournament and was joint winner of the Irish Hospitals Tournament in the space of a month. He finished third in the 1955 Open Championship.

The Welsh National PGA Championship is a golf tournament played annually in Wales since 1904. For many years the event was called the Welsh Professional Championship. Currently entry is restricted to professionals employed by a Welsh club and those born in Wales or with a parent or grandparent born in Wales. 2016 was the 100th edition of the event and was won by Lydia Hall after a final round 67.

The 1912 News of the World Match Play was the tenth News of the World Match Play tournament. It was played from Wednesday 2 to Friday 4 October at Sunningdale Golf Club. 32 players competed in a straight knock-out competition, with each match contested over 18 holes, except for the final which was over 36 holes. The winner received £100 out of a total prize fund of £400. Harry Vardon defeated Ted Ray by 1 hole in the final to win the tournament.

Michael Moran was an Irish professional golfer, the leading Irish golfer of his generation. He won the Irish Professional Championship five years in succession from 1909 to 1913 before moving to England and being ineligible to compete in 1914. He played in the Open Championship from 1909 to 1914 with a series of high finishes. He finished joint third in 1913 despite a disastrous 89 in the third round which included a 10 at the first hole. He died in France in 1918 at the age of 31.