Founded in 1891, the course was initially designed by Tom Chisholm and Robert Bird, but modifications to the course have been made since by a number of people including James Braid, Alister MacKenzie, Harry Colt, John Henry Taylor, and Harry Vardon.

The Royal and Ancient Golf Club of St Andrews is one of the oldest golf clubs in the world. It is a private members-only club based in St Andrews in Scotland. It was previously known colloquially as "The R&A", but in 2004, a new organisation known as The R&A was spun off, assuming the club's functions as one of the governing authorities of the game and organiser of tournaments such as The Open Championship. Despite this legal separation, one of the club's objectives remains to contribute, through its members, to the governance, championship organisation, and golf development roles now carried out by The R&A. 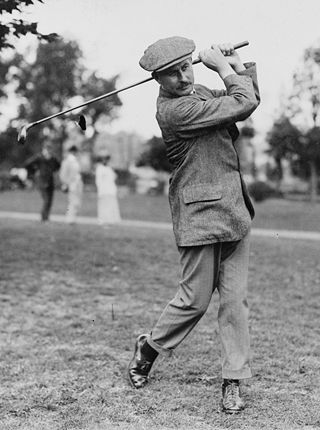 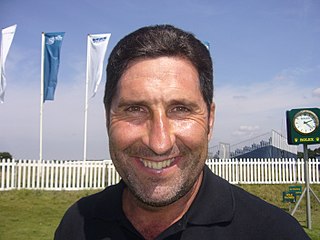 José María Olazábal Manterola is a Spanish professional golfer from the Basque region who has enjoyed success on both the European Tour and the PGA Tour, and has won two major championships, both at The Masters. 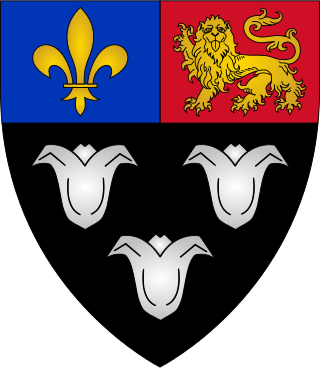 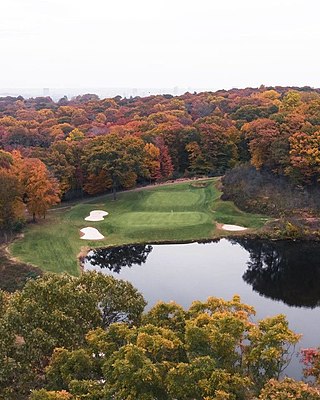 The Country Club, located in Brookline, Massachusetts, is the oldest golf-oriented country club in the United States. It holds an important place in golf history, as it is one of the five charter clubs that founded the United States Golf Association, and has hosted numerous USGA tournaments including the 1913 U.S. Open won by then-unknown Francis Ouimet. Although the club has 1300 members, it is known for its exclusivity.

The 8th Ryder Cup Matches were held 16–17 September 1949, at Ganton Golf Club in Scarborough, North Yorkshire, England. The United States team won the competition by a score of seven to five. 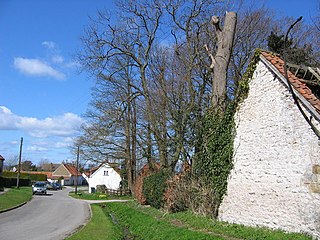 Ganton is a village and civil parish in the Ryedale district of North Yorkshire, England. It is situated on the south side of the Vale of Pickering immediately north of the Yorkshire Wolds. Ganton lies 7 miles (11 km) west of the coastal town of Filey, and 9 miles (14 km) south-west of Scarborough. It was historically part of the East Riding of Yorkshire until 1974.

Lindrick Golf Club is a golf course in South Yorkshire and is also a site of special scientific interest (SSSI). The SSSI covers 22 hectares and was designated for its biological interest. The site was notified in 1987.

Woodhall Spa Golf Club is a private golf club in England, that is located to the north of Woodhall Spa, Lincolnshire. The club was founded in 1891. In 1995 the club was purchased by the English Golf Union, who have since relocated their headquarters onto the site, which is now known as The National Golf Centre.

The 2003 Walker Cup, the 39th Walker Cup Match, was played on 6 and 7 September 2003, at Ganton Golf Club in North Yorkshire, England. The event was won by Great Britain and Ireland 12½ to 11½, marking the first time that Great Britain & Ireland had three consecutive wins.

The University Golf Match is the annual golf match contested between the Full Blue golf teams from Oxford and Cambridge universities. Dating back to 1878, it is the oldest amateur event in golf, as the first Amateur Championship was played in 1885. It is also the oldest team event in English golf. Scottish team matches were common after 1849, and included St Andrews University matches against Fife artisan clubs.

The 1913 U.S. Open was the 19th U.S. Open, held September 18–20 at The Country Club in Brookline, Massachusetts, a suburb southwest of Boston. Amateur Francis Ouimet, age 20, won his only U.S. Open title in an 18-hole playoff, five strokes ahead of Britons Harry Vardon and Ted Ray.

Tom Williamson was an English professional golfer who played in the early 20th century. Williamson finished in the top 10 in the Open Championship on six occasions and played in it over fifty years. His best performance came in the 1914 Open Championship when he tied for fourth place, six shots behind the winner. With Harry Vardon he won the 1913 Sphere and Tatler Foursomes Tournament by a convincing 7 & 5 margin. He was Captain of England in 1909 and represented England between 1904 and 1913. He won the Midland Professional Championship when it was first held in 1897 and a further six times. He was a renowned club maker and was the first to number clubs in 1906. He experimented with score cards placing a course plan on the reverse side in 1930. He designed sixty courses, the majority in the East Midlands. He was a founder member of the PGA and became its Captain in 1928. He had a good reputation as a teacher and taught Enid Wilson who won the English Ladies Championship three times. He was known as a modest man of integrity.