Leisha Hailey (born July 11, 1971) is an American actress and musician known for playing Alice Pieszecki in the Showtime Networks series The L Word and The L Word: Generation Q . Hailey first came to the public's attention as a musician in the pop duo The Murmurs and has continued her music career as part of the band Uh Huh Her.

Born in the United States Civil Administration of the Ryukyu Islands, Japan to American parents, Hailey grew up in Bellevue, Nebraska. [1] [2] [3]

At 17, she came out as a lesbian before moving to New York City to attend the American Academy of Dramatic Arts. [4]

With her Academy classmate Heather Grody, she formed the pop duo The Murmurs in 1991. In the 1990s, they released several albums and toured on the Lilith Fair.[ citation needed ] In 2001, Hailey and Grody changed their name to Gush. The group disbanded when Hailey was cast in The L Word. In 2005, Hailey founded Marfa Records. [5]

In July 2007, Uh Huh Her, an electropop duo consisting of Hailey and Camila Grey, released an EP entitled I See Red; over a year later they released their first album Common Reaction .

Hailey's television debut was in 1996 when she played a struggling musician on an episode of Boy Meets World . [6] Her first major film role was in the 1997 movie All Over Me . [7]

From 2004 to 2009, she starred as Alice Pieszecki, a journalist, television, and radio show host, on The L Word. At the beginning of the series, Hailey's character identified as bisexual. By the end of the series, specifically in season 5, her character dated mostly women. [8]

In September 2008, Showtime announced Hailey would star in The Farm, [9] a "pilot presentation spinoff" of The L Word, to be written and produced by Ilene Chaiken, creator and executive producer of The L Word. [10] It was announced in April 2009 that the show would not be picked up by Showtime. [11] [12]

Hailey has appeared in several Yoplait yogurt commercials [13] as well as a BMW commercial. [14] In April 2008, Hailey was named spokesperson for Olivia Cruises, a travel company which sells cruises and resort vacations marketed towards lesbian customers. [15] She also stars in the psychological thriller Fertile Ground. [16]

In 2015, Hailey appeared in an episode [17] of long-running The CW show Supernatural as Amelia Novak, the estranged wife of Jimmy Novak (human vessel of the angel Castiel, played by Misha Collins.)

In 2007, Hailey was named the sexiest woman in the AfterEllen Hot 100 list compiled by AfterEllen.com. [18]

Hailey dated k.d. lang for nearly 5 years until breaking up in 2001. [4] She also had a long-term relationship with Nina Garduno from 2004 to 2010. From 2011 to 2016, she was dating her bandmate Camila Grey. Their relationship first became public when the two were ejected from a Southwest Airlines flight for arguing with a flight attendant who asked them to stop kissing. [19]

The L Word is an American-Canadian co-production television drama that aired on Showtime from January 18, 2004 to March 8, 2009. The series follows an ensemble cast of friends who live in West Hollywood, California; it featured American television's first ensemble cast depicting homosexual, bisexual and a transgender person. The premise originated with Ilene Chaiken, Michele Abbot and Kathy Greenberg; Chaiken is credited as the primary creator of the series, and also served as its executive producer. The series theme song was preformed by the band Betty.

Uh Huh Her is the sixth studio album by English alternative rock musician PJ Harvey. The album was written, recorded and produced over a two-year period by the singer-songwriter herself. She also played every instrument on the album with the exception of the final drum tracks, added by long-time collaborator Rob Ellis. It was released on 31 May 2004 in the United Kingdom, and 8 June 2004 in the United States. 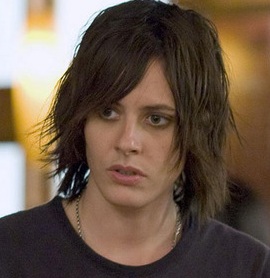 Katherine Sian Moennig is an American actress. She is best known for her role as Shane McCutcheon on The L Word (2004–09), as well as Jake Pratt on Young Americans (2000). Moennig has played the role of Lena in the Showtime series Ray Donovan since 2013. She played a recurring role on Grownish on Freeform as Professor Paige Hewson in season 2 and 3.

All Over Me is a 1997 American teen drama film directed by Alex Sichel and written by her sister, Sylvia Sichel. Alex Sichel received a grant from the Princess Grace Foundation to make a film about the riot grrrl music scene and then asked her sister to collaborate with her. 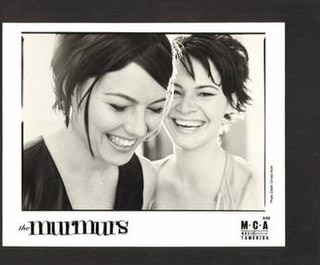 The Murmurs were an American alternative pop music duo composed of singer-songwriters Leisha Hailey and Heather Grody. Some time after the duo went their separate ways, Hailey became one half of Uh Huh Her and Grody became a founding member of Redcar.

Alice Elisabeth Pieszecki is a fictional bisexual character on the Showtime television network series The L Word, and the sequel series L Word: Generation Q, shown nationally in the United States. She is played by American actress Leisha Hailey.

Jennifer "Jenny" Diane Schecter is a fictional character and the main antagonist of the American Showtime television drama series The L Word, played by Mia Kirshner. Jenny debuted on-screen during the pilot episode and remained until the series' final episode. Jenny became well documented in the media for her outlandish plots. Jenny was created by series creator Ilene Chaiken, based on herself as a younger woman living in the lesbian community. Chaiken implemented a series of changes to the character, one of which being the inclusion of a sexual abuse storyline and self-harm, which some critics observed as being attempts to make her likable in the LGBT community. One storyline that gained mainstream attention was adopting a homeless dog, only to have it put down for personal gain. Other storylines include stripping, writing novels, coming out, directing a film, affairs, and her possible murder. The final season is based around the lead-up to her death, during which Jenny made herself extremely unpopular with her friends, who became suspects.

Alicia Warrington is an American drummer. She has played drums for Kate Nash, Kelly Osbourne, Lillix, Hannah Montana, Uh Huh Her, Gore Gore Girls, Dawn Robinson, The All-Girl Boys Choir, The Dollyrots, The Bruises, Tracy Chapman, Selena Gomez, Colton Dixon, Chris Rene and others. In December 2018, Alicia signed for American professional wrestling company WWE and started working for their NXT brand, as the host of the post-show. As of the April 25, 2019, episode of the NXT show on WWE Network, she is the show's ring announcer, replacing Kayla Braxton, who moved up to an interviewer position on SmackDown. 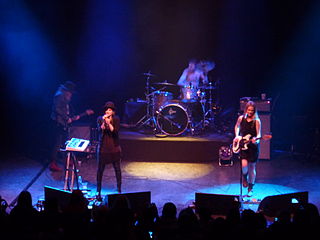 Uh Huh Her is an indie/rock/electropop band that was formed in January 2007. The band's name came from an album by artist PJ Harvey, titled Uh Huh Her. The band has mentioned several times changing their name to UHH, as opposed to the full "Uh Huh Her," believing the original name looks good in written form, but is awkward to pronounce. It is unclear at this time if the name change will be made official at any point.

Sarah Warn is an American writer and the former editor of entertainment website AfterEllen.com. 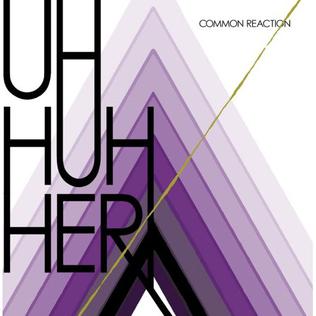 Common Reaction is the debut album from Uh Huh Her, which was released on August 19, 2008 in the United States. This is an elextro/pop album that features Camila Grey's voice and Leisha Hailey's abilities on guitar and keyboard. 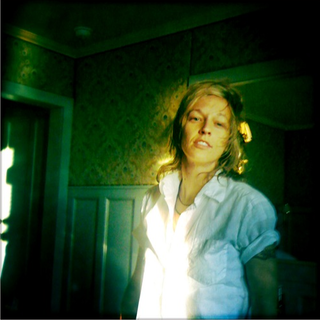 Amy Cook is an American musician and singer-songwriter living in Austin, Texas.

Fertile Ground is a 2011 horror film directed by Adam Gierasch. The film was released as part of the After Dark Originals line on January 28, 2011 and stars Leisha Hailey as a pregnant woman who finds herself subjected to several strange supernatural occurrences. 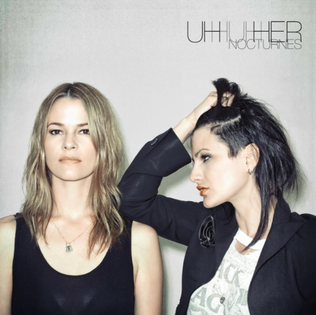 Nocturnes is the second studio album from Uh Huh Her, which was released on October 11, 2011 worldwide. The album had four singles and music video, "Another Case", "Disdain", "Wake To Sleep" and most recently, "Human Nature".

Future Souls is the third studio album from American band Uh Huh Her. Released on March 25, 2014 worldwide and shipped out March 24, the album features dance influences and an electropop background. Two singles off the album have been released: Innocence, on February 4, 2014, and "It's Chemical" on March 4, 2014.

I See Red is the debut extended play by indie band Uh Huh Her. I See Red was released on July 24. 2007, on Plaid Records.

The L Word: Generation Q is an American drama television series produced by Showtime that premiered on December 8, 2019. It's a sequel series to The L Word, which aired on Showtime from 2004 to 2009. The UK television premiere was on Sky Atlantic on Tuesday February 4th 2020, and a first-look screening took place on December 9 2019, hosted by House of Pride, to coincide with the US release.