Lina Marcela Medina de Jurado (Spanish pronunciation:  [ˈlina meˈðina] ; born 23 September 1933) [1] is a Peruvian woman who became the youngest confirmed mother in history, giving birth at age five years, seven months, and 21 days. [1] [2] Based on the medical assessments of her pregnancy, she was less than five years old when she became pregnant. She is also believed to be the youngest documented case of precocious puberty.

Lina Medina was born in Ticrapo, Castrovirreyna Province, Peru, [2] to parents Tiburelo Medina, a silversmith, and Victoria Losea. [3] She was one of nine children. [4]

Her parents brought her to a hospital in Pisco at age five due to increasing abdominal size. [5] Doctors originally thought that she had a tumor, but they then determined that she was in her seventh month of pregnancy. Dr Gerardo Lozada took her to Lima to have other specialists confirm that she was pregnant. [1]

Newspaper accounts indicate that interest in the case developed on many fronts. The San Antonio Light newspaper in Texas reported in its 16 July 1939 edition that a Peruvian obstetrician and midwife association had demanded that she be transported to a national maternity hospital. The paper quoted reports in the Peruvian paper La Crónica that an American film studio had sent down a representative "with authority to offer the sum of $5,000 to benefit the minor" in exchange for filming rights, but "we know that the offer was rejected". [6] The article noted that Lozada had made films of Medina for scientific documentation and had shown them while addressing Peru's National Academy of Medicine; some baggage carrying the films had fallen into a river on a visit to the girl's hometown, but enough of his "pictorial record" remained to "intrigue the learned savants". [6]

A month and a half after the original diagnosis, Medina gave birth to a boy by caesarean section. She was 5 years, 7 months, and 21 days old, [1] the youngest person in history to give birth. The caesarean birth was necessitated by her small pelvis. The surgery was performed by Lozada and Dr Busalleu, with Dr Colareta providing anaesthesia. The doctors found that she already had fully mature sexual organs from precocious puberty. [2] Dr. Edmundo Escomel reported her case in the medical journal La Presse Médicale, including the additional details that her menarche had occurred at eight months of age, in contrast to a past report stating that she had been having regular periods since she was three years old [1] [7] [8] (or 2½ according to a different article). [2]

Identity of the father and later life

Medina has never revealed the father of the child nor the circumstances of her impregnation. Escomel suggested that she might not actually know herself, as she "couldn't give precise responses". [1] Lina's father was arrested on suspicion of child sexual abuse, but he was released due to lack of evidence, and the biological father was never identified. [1] [9] Her son grew up healthy. He died in 1979 at the age of 40 from bone disease. [1] [10]

In young adulthood, Medina worked as a secretary in the Lima clinic of Lozada, which gave her an education and helped put her son through high school. [11] She married Raúl Jurado, who fathered her second son in 1972. As of 2002 [update] , they lived in a poor district of Lima known as "Chicago Chico". [12] She refused an interview with Reuters that year, [2] just as she had turned away many reporters in years past. [11]

Although it was speculated that the case was a hoax, a number of doctors over the years have verified it based on biopsies, X rays of the fetal skeleton in utero , and photographs taken by the doctors caring for her. [1] [13] [14]

There are two published photographs documenting the case. The first was taken around the beginning of April 1939, when Medina was seven-and-a-half months into pregnancy. Taken from Medina's left side, it shows her standing naked in front of a neutral backdrop. This is the only published photograph of Lina taken during her pregnancy. [15]

In 1955, except for the effects of precocious puberty, [2] there was no explanation of how a girl less than five years old could conceive a child. [11] Extreme precocious pregnancy in children aged five or under has only been documented with Medina. [2] [8]

Caesarean section, also known as C-section, or caesarean delivery, is the use of surgery to deliver babies. A caesarean section is often necessary when a vaginal delivery would put the baby or mother at risk. This may include obstructed labor, twin pregnancy, high blood pressure in the mother, breech birth, or problems with the placenta or umbilical cord. A caesarean delivery may be performed based upon the shape of the mother's pelvis or history of a previous C-section. A trial of vaginal birth after C-section may be possible. The World Health Organization recommends that caesarean section be performed only when medically necessary. Some C-sections are performed without a medical reason, upon request by someone, usually the mother.

Menarche is the first menstrual cycle, or first menstrual bleeding, in female humans. From both social and medical perspectives, it is often considered the central event of female puberty, as it signals the possibility of fertility.

Louise Joy Brown is an English woman known for being the first human to have been born after conception by in vitro fertilisation, or IVF. 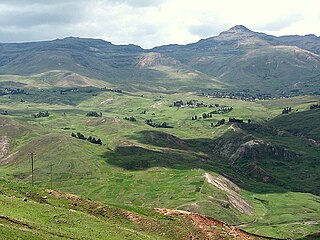 Huancavelica is a department in Peru with an area of 22,131.47 km2 (8,545.01 sq mi) and a population of 347,639. The capital is the city Huancavelica. The region is bordered by the departments of Lima and Ica in the west, Junín in the north, and Ayacucho in the east.

Michel Odent is a French obstetrician and childbirth specialist.

Caesarean delivery on maternal request (CDMR) is a caesarean section birth requested by the pregnant woman without a medical reason.

In case of a previous caesarean section a subsequent pregnancy can be planned beforehand to be delivered by either of the following two main methods:

Isabel Larrañaga Ramirez is a Venerable in the Roman Catholic Church. She was born in Manila, Philippines. Her cause for beatification is currently underway. The actors for her cause are the Hermanas de la Caridad del Sagrado Corazón de Jesús.

Abortion in Paraguay is illegal except in case of the threat to the life of the woman. Anyone who performs an abortion can be sentenced to 15 to 30 months in prison. If the abortion is done without the consent of the woman, the punishment is increased to 2 to 5 years. If the death of the woman occurred as a result of the abortion, the person who did the procedure can be sentenced to 4 to 6 years in prison, and 5 to 10 years in cases in which she did not consent.

The Milk of Sorrow is a 2009 film by Peruvian director Claudia Llosa and co-produced by Peru and Spain. The film stars Magaly Solier and addresses the fears of abused women during Peru's recent history. It won the 2009 Golden Bear award and FIPRESCI prize at the Berlin International Film Festival, as well as the award for best film in the 24 Festival Internacional de Cine de Guadalajara in Mexico. It was nominated for the 82nd Academy Awards for Best Foreign Language Film, becoming the first Peruvian film to be nominated for the award.

Tysiąc v. Poland was a case decided by the European Court of Human Rights (ECtHR) in 2007. A pregnant woman from Poland, diagnosed with a severe eye disease, tried to get an abortion to avoid an escalation of her disease. Her requests were rejected by several medical doctors and she underwent labor of her third child. Her condition later deteriorated, and she sued one of the doctors. Her criminal lawsuits were rejected in Poland and the case was appealed to the European Court of Human Rights, which accepted one part of the complaint, and the plaintiff was awarded damages.

Rosario Ponce López is a university student at the Agraria University in La Molina, Lima, Peru. On April 4, 2011, during a field trip to Colca Canyon, she and her boyfriend, Ciro Castillo Rojo became lost. She was found alive on April 13, 2011 but her boyfriend was not with her. After an intensive search, a body was found on October 16 in a deep ravine in the area where Rosario had indicated Ciro was likely to be. On October 26, 2011 the body was officially determined to be that of Ciro and that the cause of death had been severe traumatic shock due to a fall.

Pregnancy is a potential result of rape. It has been studied in the context of war, particularly as a tool for genocide, as well as other unrelated contexts, such as rape by a stranger, statutory rape, incest, and underage pregnancy. The current scientific consensus is that rape is at least as likely to lead to pregnancy as consensual sexual intercourse, with some studies suggesting rape may actually result in higher rates of pregnancy than consensual intercourse.

Tewhida Ben Sheikh was the first modern Muslim woman in North Africa to become a physician. She was also a pioneer in women's medicine, in particular contraception and abortion access.

Salomé Karwah was a Liberian nurse who was named co-Person of the Year by Time magazine in 2014 for her efforts to combat the West African Ebola virus epidemic in Liberia. She appeared on the cover of Time in December 2014 with other health care workers and colleagues working to end the epidemic. Karwah survived ebola herself before returning to work to help other patients afflicted with the disease. The actions of Karwah, who worked with Médecins Sans Frontières (MSF) and other health care professionals, are believed to have saved lives of thousands.