Liner notes (also sleeve notes or album notes) are the writings found on the sleeves of LP record albums and in booklets which come inserted into the compact disc jewel case or the equivalent packaging for cassettes. [1]

Liner notes are descended from the program notes for musical concerts, and developed into notes that were printed on the inner sleeve used to protect a traditional 12-inch vinyl record, i.e., long playing or gramophone record album. The term descends from the name "record liner" or "album liner". Album liner notes survived format changes from vinyl LP to cassette to CD. [2] These notes can be sources of information about the contents of the recording as well as broader cultural topics. [3]

Such notes often contained a mix of factual and anecdotal material, and occasionally a discography for the artist or the issuing record label. Liner notes were also an occasion for thoughtful signed essays on the artist by another party, often a sympathetic music journalist, a custom that has largely died out. However, the liner note essay has survived in retrospective compilations, particularly in box sets. It is also a tradition in Japan, especially for foreign artist releases. Liner notes often include complete song lyrics for the album. [4]

Liner notes now usually include information about the musician, lyrics, a personnel list, and other credits to people the musicians want to thank and people or companies involved in the production of the music. [5] They also can give details on the extent of each musical piece, and sometimes place them in historical or social context. Liner notes for classical music recordings often provide information in several languages; if the piece includes vocal parts, they will often include a libretto, possibly also translated into several languages.

Liner notes sometimes provide metadata that can help when cataloguing private or public collections of sound recordings. [4] [9] However, the information provided on liner notes varies considerably depending on the studio or label which produced the record. It also varies how much of the metadata digital media services such as Spotify and iTunes make public. [5] In 2019 Australian company Jaxsta launched a database of official music credits and liner notes. The database is made up of content-owner supplied metadata rather than crowd-sourced data, making previous hidden metadata more widely available to the music industry as well as the public domain. [10] [11]

Increasingly and due to the rise of digital downloads, a digital booklet is being introduced to compensate for the lack of a physical booklet. Apple Inc. also introduced iTunes LP which features interactive menus instead of simple pages. [12] Spotify also has songwriter and producer credits available for individual tracks. [13] Lyrics are also available on certain tracks, in collaboration with Genius. [14]

A Grammy Award for Best Album Notes has been given annually since the 6th Annual Grammy Awards, May 12, 1964. [15]

Blue Note Records is an American jazz record label owned by Universal Music Group and operated under Capitol Music Group. Established in 1939 by Alfred Lion and Max Margulis, it derived its name from the blue notes of jazz and the blues. Originally dedicated to recording traditional jazz and small group swing, the label began to switch its attention to modern jazz around 1947. From there, Blue Note grew to become one of the most prolific, influential and respected jazz labels of the mid-20th century, noted for its role in facilitating the development of hard bop, post-bop and avant-garde jazz, as well as for its iconic modernist art direction.

An album is a collection of audio recordings issued as a collection on compact disc (CD), vinyl, audio tape, or another medium such as digital distribution. Albums of recorded sound were developed in the early 20th century as individual 78-rpm records collected in a bound book resembling a photograph album; this format evolved after 1948 into single vinyl long-playing (LP) records played at 33+1⁄3 rpm.

An album cover is the front of the packaging of a commercially released audio recording product, or album. The term can refer to either the printed paperboard covers typically used to package sets of 10 in (25 cm) and 12 in (30 cm) 78-rpm records, single and sets of 12 in (30 cm) LPs, sets of 45 rpm records, or the front-facing panel of a CD package, and, increasingly, the primary image accompanying a digital download of the album, or of its individual tracks.

A Christmas Record is an LP originally released in 1981 by ZE Records. It was recorded by various musicians from that label's roster, including Was, August Darnell, Material, Suicide, Cristina, and The Waitresses, all performing original seasonal songs. The album was reissued in 1982, as a "Special Edition", with a revised track listing. In 2004, a further revised version was issued on CD, as ZE Xmas Record Reloaded 2004. The 2004 version was remastered and re-released again in 2016 under its original title and artwork, with one of the 1982 "Special Edition" songs restored.

Jaxsta is an Australian tech start-up seeking to become the world’s most comprehensive source of official music credits. According to a 2018 report in The Sydney Morning Herald, "it wants to be a cross between Bloomberg and LinkedIn, a trusted source for the music industry when it comes to finding out who played what role on your favourite songs." This extends to performers, artists, engineers, producers and songwriters. Jaxsta's data is content-owner supplied rather than crowd-sourced.

There Never Was a Time is a studio album by American country music singer–songwriter Hank Locklin. It was released in 1977 via Plantation Records and contained ten tracks. It was Locklin's twenty fifth studio album released in his career and his only album for the Plantation label. The project spawned four singles released between 1976 and 1977. 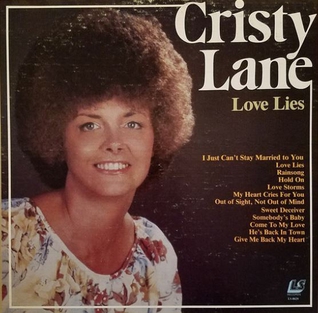 Love Lies is a studio album by American Christian and country music artist Cristy Lane. It was released in December 1978 via LS Records and contained 12 tracks. The album was the third released in Lane's music career and contained two singles. Its second single release, "I Just Can't Stay Married to You," became a top five country hit in both the United States and Canada. Love Lies received positive reviews from music critics and publications. 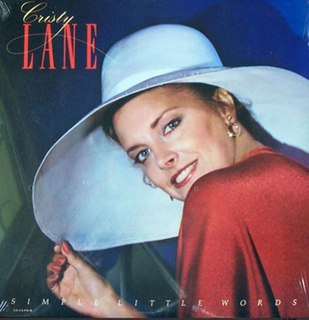 Simple Little Words is a studio album by American Christian and country artist Cristy Lane. It was released in September 1979 via United Artists Records and LS Records. It contained ten tracks. It was the fourth studio effort of Lane's music career and her first with the United Artists label. Simple Little Words produced three singles that became hits on the North American country charts. The album received a positive review following its release. 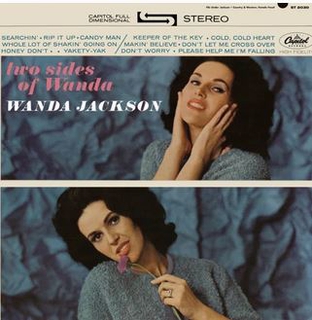 Two Sides of Wanda is a studio album by American recording artist Wanda Jackson. It was released in March 1964 via Capitol Records and contained 12 tracks. It was the sixth studio release of Jackson's career; side one contained rockabilly performances, while side two featured country music selections. The album received a nomination from the Grammy Awards following its release and has since been re-released.

Wanda Jackson Country! is a studio album by American recording artist Wanda Jackson. It was released in February 1970 via Capitol Records and contained ten tracks. It was Jackson's fifteenth studio album released in her recording career and her fifteen with the Capitol label. The album included four single releases that made chart positions on the American country music survey: "By the Time You Get to Phoenix", "Everything's Leaving", "My Big Iron Skillet" and "Two Separate Bar Stools". 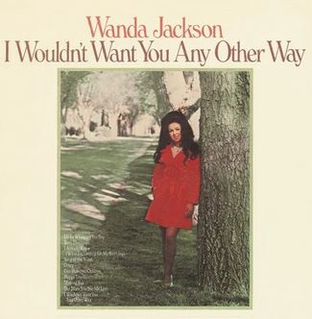 I Wouldn't Want You Any Other Way is a studio album by American recording artist Wanda Jackson. It was released in September 1972 via Capitol Records and contained ten tracks of country music. The album was Jackson's nineteenth released in her career. Four singles were spawned from the album, including the title track. However, only "Back Then", "I Already Know " and "I'll Be Whatever You Say" placed on the American country music chart. The album would later re-released to digital markets several decades later.

Closer to Jesus is a studio album by American recording artist Wanda Jackson. It was released in 1977 via Word Records and contained a total of ten tracks. The disc was Jackson's twenty fifth studio collection released in her career and her fifth album to consist entirely of gospel recordings.

Rockabilly Fever is a studio album by American recording artist Wanda Jackson. It was released in 1984 via Tab Records for the Scandinavian market in Europe. It was then re-released to other markets, including Jackson's home country in 1986 and was re-titled Rock and Roll Away Your Blues.

Teach Me to Love is a studio album by American recording artist Wanda Jackson. It was released in 1984 via Vine Records and contained 11 tracks. It was the thirty first studio recording of her career and was a collection of gospel songs. It was also her first album to issued with the Vine label.

My Kind of Gospel is a studio album by American recording artist Wanda Jackson. It was released in 1983 via Vine Records and contained ten tracks of material. It was the twenty ninth studio record released in Jackson's career and among a series of gospel recordings she released during the 1980s decade.

Let's Have a Party in Prague is a studio album by American recording artist Wanda Jackson and European recording artist Karel Zich. It was released on the Supraphon label in 1988 and contained a total of 13 tracks. The album was a collection of Rockabilly songs released exclusively for the European market. It was Jackson's first collaborative studio album and Zich's second. One single was spawned from the album in 1988.

"'But Love Me'" is a song written and originally recorded by Kenny Nolan. It appeared on his 1978 album before being recorded by American country artist Janie Fricke. Her version was released as a single via Columbia Records in October 1979 and charted on the American country songs survey in 1979.

Love Notes is a studio album by American country artist Janie Fricke. It was released in March 1979 via Columbia Records and contained ten tracks. It was the second album released in Fricke's music career and included three singles that charted in both the United States and Canada. The album was met with favorable reviews from writers and critics.

From the Heart is a studio album by American country artist Janie Fricke. It was released in November 1979 via Columbia Records and contained ten tracks. It was the third studio release of Fricke's career and spawned two singles that charted on the country surveys in the United States and Canada. This included a cover of "Pass Me By ", which was issued as a single in 1980.