This article only lists "normal ropeways"; in other words, aerial lifts excluding chairlifts. Names might be tentative. 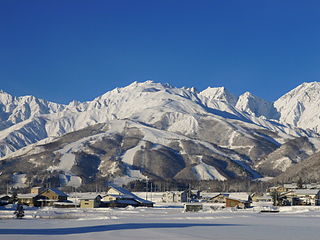 Hakuba is a village located in Nagano Prefecture, Japan. As of 1 April 2019, the village had an estimated population of 9,007 in 4267 households, and a population density of 48 persons per km2. The total area of the village is 189.36 square kilometres (73.11 sq mi). Hakuba is an internationally renowned ski resort town in the northern Japan Alps. As the surrounding valley has an annual snow fall of over 11 meters, it is the central hub for 10 ski resorts with more than 200 runs. The village was the main event venue for 1998 Winter Olympics.

Myōkōkōgen was a town in Nakakubiki District, Niigata Prefecture, Japan]

Niseko is a town located in Shiribeshi Subprefecture, Hokkaido, Japan. To Japanese people, Niseko principally refers to a mountain range and a municipal area. However, overseas the name has come to refer to a wider area of ski resorts encompassing Hokkaido's Mount Yōtei, often referred to as the "Mt. Fuji of Hokkaido", and Annupuri ranges. The name Niseko derives from the Ainu language, and it means "a cliff jutting over a riverbank deep in the mountains". The Niseko town's main industries are agriculture and tourism. The resort itself, Niseko United, is part of the Mountain Collective. Moreover, the town is renowned for its quality powder snow and world-class facilities, including traditional onsen and restaurants.

The Prince Hotels, Inc. is the name of a hotel chain company headquartered in Toshima-ku, Tokyo, Japan. It is a subsidiary of Seibu Holdings, Inc. Together with Seibu Railway, Prince Hotels is the core company of Seibu Group. 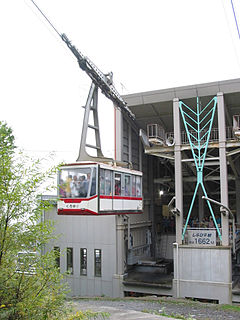 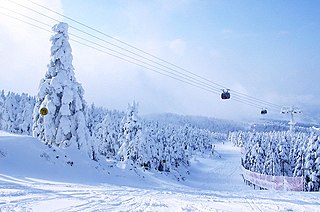 The Zaō Ropeway is the name of Japanese aerial lift system, as well as its operator. The route, consisting of two lines, climbs Mount Zaō at Zaō Onsen, Yamagata, Yamagata. The lines transport skiers of Yamagata Zao Onsen Ski Resort and rime spectators in winter, tourists and mountain climbers in summer.

The Gozaisho Ropeway is the name of a Japanese aerial lift line, as well as its operator. Opened in 1959, the line climbs Mount Gozaisho in Komono, Mie. Riders can see a view of Yokkaichi and Ise Bay. The mountain itself is known for its scenery and Yunoyama Onsen. The line links to a chairlift line that goes to the summit.

The Daisetsuzan Sōunkyō Kurodake Ropeway is a Japanese aerial lift line in Kamikawa, Hokkaidō, operated by Rinyū Kankō (りんゆう観光). The company also operates a travel agency, a hotel in Asahidake Onsen, and chairlifts at Mount Moiwa Ski Resort, Sapporo. Opened in 1967, the aerial lift climbs Mount Kuro of the Daisetsuzan Mountains from the Sounkyo Onsen (層雲峡温泉) hot spring resort. A chairlift is connected to the line, climbing higher. The line transports skiers in winter, hikers in summer, and autumn color spectators in autumn. This is currently the northernmost aerial lift in the country, after Wakkanai Kōen Ropeway (稚内公園ロープウェイ) in Wakkanai closed in 2006.

The Teineyama Ropeway is Japanese aerial lift line in Teine, Sapporo, Hokkaidō. The line is operated by Kamori Kankō, which also operates Sapporo Teine resort around the line, including ski areas, an amusement park, and golf courses. Opened in 1974, the line mainly transports skiers in "winter". In "summer", the line operates only on Saturday and Sunday.

The Yuzawa Kōgen Ropeway, officially the Yuzawa Onsen Ropeway, is Japanese aerial lift line in Yuzawa, Niigata, operated by Snow Resort Service. The line runs in the town of the huge ski resort complex, but it also transports hikers in other seasons. It opened in 1991.

The Kitayatsugatake Ropeway is the name of a Japanese aerial lift line in Chino, Nagano, as well as its operator. The company also operates Pilatus Tateshina Snow Resort, a ski area served by the line. The company operates Tateshina Kōgen Art Museum at the submontane station as well. Opened in 1967, the line climbs Tateshina Highland, transporting skiers and rime spectators in winter, hikers in other seasons. The observatory has a view of the Yatsugatake Mountains and Southern Alps.

The Kamori Kankō (加森観光) is a tourist company operating hotels and amusement parks, mainly in Hokkaidō, Japan. The company is headquartered in Sapporo. Its most important resort facility has been Rusutsu Resort. The company was founded in 1981, and its group rapidly expanded after 1998, through mergers of underperforming facilities. 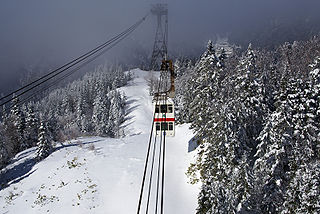 The Shinhotaka Ropeway is an aerial lift system in Takayama, Gifu Prefecture, Japan, and is operated by Okuhi Sightseeing Development. The Meitetsu Group company also operates hotels in the area. Opened in 1970, the line climbs to the hillside of the Hida Mountains' Mount Hotaka, the third tallest mountain in Japan.

Shiga Kogen is a ski resort and hiking spot, located in the Jōshin'etsu-kōgen National Park in the highlands of Yamanouchi, Nagano, Japan. In 1980, an area of 13,000 ha was designated a UNESCO Man and the Biosphere Reserve. 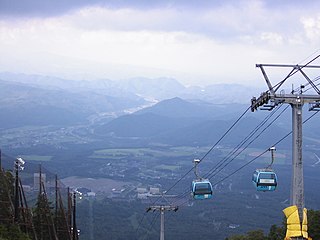 The Appi Kogen Ski Resort is one of the largest ski resorts in Japan, operated by Iwate Hotel & Resort, adjacent to the Towada-Hachimantai National Park. The resort is most famous for its ski slopes, but it also has a guest ranch, golf courses, tennis courts, soccer fields, sports clubs, hot springs (onsen), and other amenities. The resort is 50 minutes from Morioka Station on the Tohoku Shinkansen by non-stop express bus. This station is approximately 496.5 km (308.5 mi) from Tokyo Station. By car, it is about 30-50 minute drive from the city of Morioka, 15 min from Matsuo-Hachimantai IC on the Tōhoku Expressway, or 20 min from Ashiro IC on the Tohoku Expwy.