List of memoirs by first ladies of the United States

Thirteen first ladies of the United States have written a total of twenty-two memoirs. The first lady is the hostess of the White House, and the position is traditionally filled by the wife of the president of the United States, with some historical exceptions. Every memoir by a first lady published in the 20th and 21st centuries has been a bestseller, at times outselling those of their presidential husbands. [1] [2]

In the early 1800s, Abigail Adams had her correspondence published as Letters of Mrs. Adams, the Wife of John Adams , and Louisa Adams "made several attempts at an autobiography", though she never sought to publish them. [1] The Memoirs and Letters of Dolley Madison, Wife of James Madison, President of the United States were published in 1886 but were actually edited by Lucia Cutts and written by Dolley Madison's niece Mary Cutts. [note 1] [4]

Julia Grant was the first to write and attempt to publish her memoirs, writing The Personal Memoirs of Julia Dent Grant in the 1890s after the death of her husband Ulysses S. Grant. However, she never found a suitable publisher for them before her death in 1902, in part because she had unrealistic expectations of their value. The memoirs were eventually published in 1975. [5] Helen Taft was the first to have memoirs published during her lifetime, in 1914. [1] Memoirs by presidential spouses were uncommon until the 1970s; in the decades after Taft, only Edith Wilson, Grace Coolidge, Eleanor Roosevelt, and Lady Bird Johnson wrote and published their memoirs. [2] Coolidge had her memoirs published in the 1930s as several articles in The American Magazine . [4] Most first ladies have written and published at least one memoir about their life since Betty Ford's publication of her first memoir in the late 1970s. [2]

Early published memoirs focused on relatively trivial matters, often largely focusing on the first lady's personal life. Helen Taft's memoirs were described by The New York Sun as "bright, witty, delightfully entertaining reminiscences" upon publication, and Edith Wilson's My Memoir was criticized by contemporary reviewers such as The New York Times for excessively focusing on clothing and social events. [6] [7] Eleanor Roosevelt, who wrote four autobiographies, marked a shift in the content of the memoirs, writing more about political issues and less on her personal life. Lady Bird Johnson condensed a dictated two-million-word transcript into 300,000 for A White House Diary , which outsold her husband Lyndon B. Johnson's memoir. [6] In the 1960s Jacqueline Kennedy Onassis was involved in editing two books by Molly Thayer, Jacqueline Kennedy and Jacqueline Kennedy: The White House Years. [4]

Memoirs written by Betty Ford, Rosalynn Carter and Barbara Bush also outsold the memoirs of their husbands. [1] My Turn by Nancy Reagan, published in 1989, was nicknamed My Burn for its "vengeful" coverage of Reagan's life, particularly in the White House. The book sold very well, remaining on The New York Times Best Seller list for more than three months. [6] [8] Michelle Obama's memoir Becoming was published in 2018. She received over $60 million in advance of publication, and the book had sold over 11.5 million copies as of November 2019 [update] . [9] [10] There has been speculation that Melania Trump is writing a memoir or in talks to do so. [11] [12] 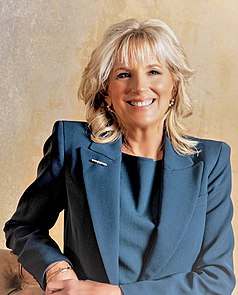 Laura Lane Welch Bush is an American teacher, librarian, memoirist and author who was the first lady of the United States from 2001 to 2009. Bush previously served as the first lady of Texas from 1995 to 2000. She is the wife of former President George W. Bush.

Nancy Davis Reagan was an American film actress and first lady of the United States from 1981 to 1989. She was the second wife of president Ronald Reagan. 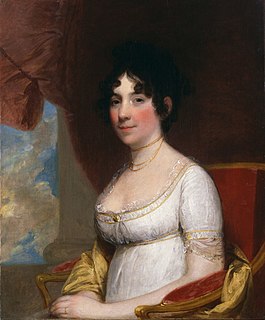 Dolley Todd Madison was the wife of James Madison, the fourth president of the United States from 1809 to 1817. She was noted for holding Washington social functions in which she invited members of both political parties, essentially spearheading the concept of bipartisan cooperation. Previously, founders such as Thomas Jefferson would only meet with members of one party at a time, and politics could often be a violent affair resulting in physical altercations and even duels. Madison helped to create the idea that members of each party could amicably socialize, network, and negotiate with each other without violence. By innovating political institutions as the wife of James Madison, Dolley Madison did much to define the role of the President's spouse, known only much later by the title first lady—a function she had sometimes performed earlier for the widowed Thomas Jefferson.

First lady is an unofficial title usually used for the wife, and occasionally used for the daughter or other female relative, of a non-monarchical head of state or chief executive. The term is also used to describe a woman seen to be at the top of her profession or art.

Melania Trump is a Slovene-American former model and businesswoman who served as the first lady of the United States from 2017 to 2021, as the wife of President Donald Trump. 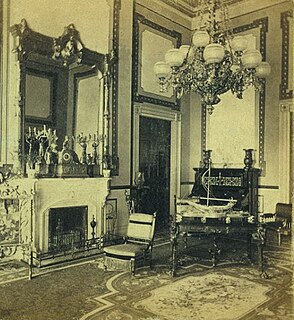 The Red Room is one of three state parlors on the State Floor in the White House, the Washington D.C. home of the president of the United States. The room has served as a parlor and music room, and recent presidents have held small dinner parties in it. It has been traditionally decorated in shades of red. The room is approximately 28 by 22.5 feet. It has six doors, which open into the Cross Hall, Blue Room, South Portico, and State Dining Room.

Richard Cutts was an American merchant and politician. A Democratic-Republican, he was most notable for his service as Second Comptroller of the United States Treasury from 1817 to 1829 and a United States Representative from Massachusetts from 1801 to 1813.

The Cutts–Madison House is an American colonial-style historic home, now used for offices located at 1520 H Street NW in Washington, D.C. The house is best known for being the residence of former First Lady Dolley Madison, who lived there from November 1837 until her death in July 1849. 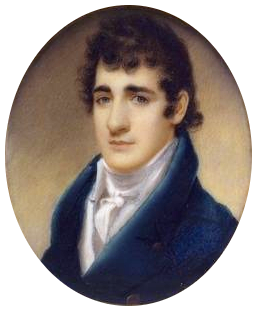 John Payne Todd, also known as Payne Todd, was the first son of Dolley Payne and John Todd Jr. His father and younger brother died in the 1793 Philadelphia yellow fever epidemic, which killed nearly 10 percent of the city's population. His mother remarried the following year, to the older James Madison, the future president of the United States. 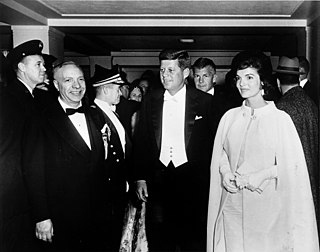 United States presidential inaugural balls are large social gatherings, both white tie and black tie, held to celebrate the commencement of a new term of the President of the United States. Planned and sanctioned by the Presidential Inaugural Committee, the official inaugural balls occur throughout the evening of Inauguration Day in the Washington D.C. area and are invitation-only, attended by guests who are issued pre-paid tickets. The President, First Lady, Vice-President and Second Lady or Second Gentleman, all make personal appearances at each of the inaugural balls held in their honor. Catered food, beverages, and live entertainment performed by national and globally acclaimed musicians are provided at the inaugural balls.

The Dolley Madison Digital Edition (DMDE) is a born-digital comprehensive edition of the correspondence and ancillary documents of Dolley Payne Todd Madison. Rotunda, the electronic imprint of the University of Virginia Press, published the first installment of the edition in 2004; the final installment will appear in the Fall of 2021. The DMDE includes over 3,500 documents and 5,000 unique identifications of people, places, terms, and titles. The edition won the 2020 Lyman H. Butterfield Award from the Association for Documentary Editing. The DMDE was the first publication of Rotunda and is now available as part of Rotunda's American Founding Era Collection, where it can be included in searches across the entire collection alongside the papers of the founders. 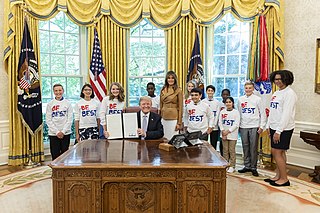 Be Best is a public-awareness campaign promoted by Melania Trump, former first lady of the United States, focusing on well-being for youth and advocating against cyberbullying.

The following is a list of works about the spouses of presidents of the United States. While this list is mainly about Presidential spouses, administrations with a bachelor or widowed President have a section on the individual that filled the role of First Lady. The list includes books and journal articles written in English after c.1900 as well as primary sources written by the individual themselves.

A Promised Land is a memoir by Barack Obama, the 44th President of the United States from 2009 to 2017. Published on November 17, 2020, it is the first of a planned two-volume series. Remaining focused on his political career, the presidential memoir documents Obama's life from his early years through the events surrounding the killing of Osama bin Laden in May 2011. The book is 768 pages long and available in digital, paperback, and hardcover formats and has been translated into two dozen languages. There is also a 28-hour audiobook edition that is read by Obama himself.

Recollections of Full Years is a 1914 memoir by Helen Taft, a First Lady of the United States and wife of William Howard Taft. The memoirs were the first to be published by a first lady. The book serves as "the most important source of information" about Helen taft.

Mary Estelle Elizabeth Cutts was an American socialite, amateur historian, and memoirist. She exchanged letters frequently with Dolley Madison and, after Madison's death in 1849, spent the last seven years of her life writing and attempting to publish two memoirs. The memoirs included biographical information on Madison and were published in 1886 as the heavily edited Memoirs and Letters of Dolley Madison, Wife of James Madison, President of the United States by Lucia B. Cutts. The work was the standard on Madison's life for over a century.