Love, Mary is a 1985 American made-for-television drama film based on the true story of Dr. Mary Groda-Lewis (portrayed by Kristy McNichol) who achieved a career in family medicine despite a personal struggle with dyslexia. The film originally aired on CBS on 8 October 1985.

Mary Louise Groda was a lonely and poor child, from a family of poor farm workers in Portland, Oregon. She was in frequent trouble with juvenile authorities, partly because she hated to go to school.

After a number of breaks from juvenile authorities, Mary's good luck ran out. She and another troubled male teen got caught while they were joy-riding with a stolen car that they crashed. That joy-ride and the subsequent crash were enough for the judge hearing Groda's case, who had no choice but to incarcerate Mary.

A social worker took an interest in Mary, who was sixteen years of age by that time, and realized that she struggled with dyslexia. She then helped Mary excel in studies. Mary gained confidence and began to fight back against her impediment, eventually going to college, earning an M.D. degree. She chose the family practice of pediatrics as her medical specialty. 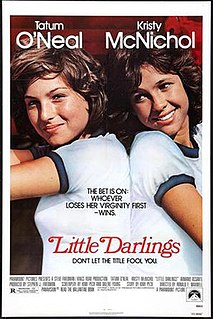 Little Darlings is a 1980 American teen comedy-drama film starring Tatum O'Neal and Kristy McNichol and featuring Armand Assante and Matt Dillon. It was directed by Ronald F. Maxwell. The screenplay was written by Kimi Peck and Dalene Young and the original music score was composed by Charles Fox. The film was marketed with the tagline "Don't let the title fool you", a reference to a scene in which Randy comments on Angel's name, to which Angel replies, "Don't let the name fool you."

Only When I Laugh is a 1981 American comedy-drama film based on Neil Simon's 1970 play The Gingerbread Lady. 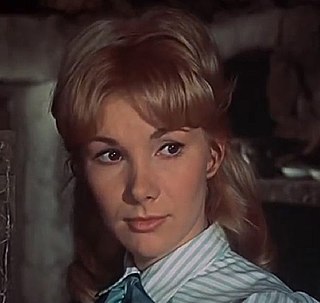 Susan, Lady Kulukundis,, known professionally by her maiden name Susan Hampshire, is an English actress known for her many television and film roles. A three-time Emmy Award winner, she won for The Forsyte Saga in 1970, The First Churchills in 1971, and for Vanity Fair in 1973. Her other television credits include The Pallisers (1974), The Grand (1997–98) and Monarch of the Glen (2000–2005).

Stockard Channing is an American actress. She is known for playing Betty Rizzo in the film Grease (1978) and First Lady Abbey Bartlet in the NBC television series The West Wing (1999–2006). She is also known for originating the role of Ouisa Kittredge in the stage and film versions of Six Degrees of Separation, for which she was nominated for the Tony Award for Best Actress in a Play and the Academy Award for Best Actress.

Christina Ann McNichol is a retired American actress, comedian, producer, and singer. She is known for such roles as Angel in the film Little Darlings, Polly in the film Only When I Laugh, and Barbara Weston in the TV sitcom Empty Nest. She won two Emmy Awards for her portrayal of teenage daughter Letitia "Buddy" Lawrence in the TV drama Family. McNichol retired from acting in 2001. 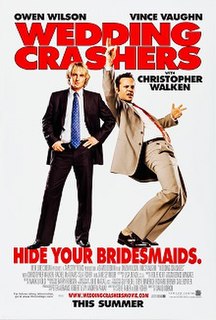 Elisabeth Brooks Luyties was a Canadian actress. Elisabeth is probably best remembered for her role as the evil, leather-clad siren Marsha Quist in The Howling (1981). Her other film appearances included Deep Space (1988), and The Forgotten One (1989), starring Kristy McNichol. 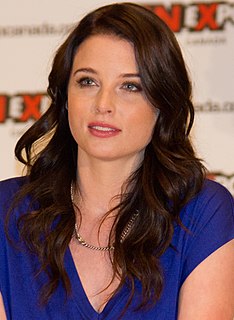 Rachel Emily Nichols is an American actress and model. Nichols began modeling while attending Columbia University in New York City in the late 1990s, and transitioned into acting by the early 2000s; she had a part in the romantic drama Autumn in New York (2000) and a one-episode role in the fourth season of Sex and the City (2002). Her first major role was in the comedy Dumb and Dumberer: When Harry Met Lloyd (2003), and she went on to achieve wider recognition playing Rachel Gibson in the final season of the action television series Alias (2005–2006) and for her role in the horror film The Amityville Horror (2005). 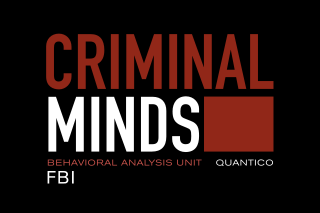 Criminal Minds is an American police procedural crime drama television series created and produced by Jeff Davis. The series premiered on CBS on September 22, 2005, and concluded on February 19, 2020. It follows a group of criminal profilers who work for the FBI as members of its Behavioral Analysis Unit (BAU), using behavioral analysis and profiling to investigate crimes and find perpetrators. The show tells the story of the team as they work various cases, and tackle their personal struggles.

The Pirate Movie is a 1982 Australian musical romantic comedy film directed by Ken Annakin and starring Christopher Atkins and Kristy McNichol. Loosely based on Gilbert and Sullivan's 1879 comic opera The Pirates of Penzance, the original music score is composed by Mike Brady and Peter Sullivan. 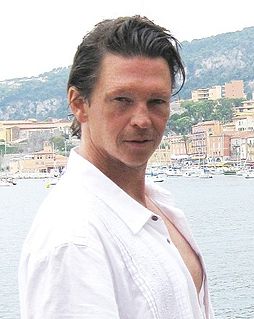 James Vincent McNichol III, known professionally as Jimmy McNichol, is an American former child actor and singer who first gained fame as a teen idol in the late 1970s. At the beginning of his career his popularity quickly grew causing networks like CBS, to create and implement multiple television series specifically for his involvement and leading roles. After making a record number of appearances on top talk shows he was viewed by many as "the face you see everywhere."

Summer of My German Soldier is a 1978 American made-for-television war drama romance film based on the novel of the same name written by Bette Greene. It stars Kristy McNichol as a Jewish-American girl and Bruce Davison as the German prisoner of war whom she befriends.

My Old Man is a 1979 American made-for-television drama film starring Kristy McNichol, Warren Oates and Eileen Brennan, directed by John Erman. The film, written by Jerome Kass, was based on the Ernest Hemingway short story "My Old Man", which had previously been adapted for the 1950 film Under My Skin. The TV film was originally broadcast on CBS on December 7, 1979.

Women of Valor is a 1986 American made-for-television war drama film about World War II directed by Buzz Kulik and starring Susan Sarandon and Kristy McNichol. It premiered on CBS on November 23, 1986 and was released on DVD on March 10, 1998.

Children of the Bride is a 1990 American drama television film directed by Jonathan Sanger and starring Rue McClanahan, Kristy McNichol, Jack Coleman, Anne Bobby, Conor O'Farrell and Patrick Duffy. The film premiered on CBS on October 5, 1990 and was released on DVD in 2003. The film was followed by two sequels: Baby of the Bride (1991) and Mother of the Bride (1993).

The Baby-Sitters Club is a series of novels written by Ann M. Martin and published by Scholastic between 1986 and 2000, that sold 176 million copies. Martin wrote the first 36 novels in the series, but the subsequent novels were written by ghostwriters, such as Peter Lerangis. The Baby-Sitters Club is about a group of friends who live in the fictional, suburban town of Stoneybrook, Connecticut. These friends run a local babysitting service called "The Baby-Sitters Club". The original four members were Kristy Thomas, Mary Anne Spier (secretary), Claudia Kishi (vice-president), and Stacey McGill (treasurer), but the number of members varies throughout the series. The novels are told in first-person narrative and deal with issues such as illness, moving, and divorce. There are also Dawn Schafer, Mallory Pike and Jessi Ramsey, Logan Bruno, Shannon Kilbourne, and Abby Stevenson. 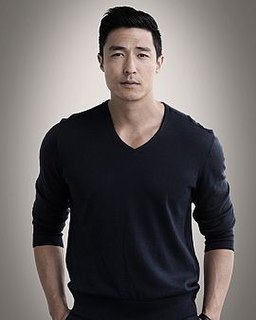 Matthew Simmons is a fictional character on the CBS crime drama Criminal Minds: Beyond Borders and Criminal Minds, portrayed by Daniel Henney.