The Luxembourg 3. Division (Luxembourgish : 3. Divisioun) is the fifth tier of the Luxembourg football league system. There are a total of 11 teams in the division. 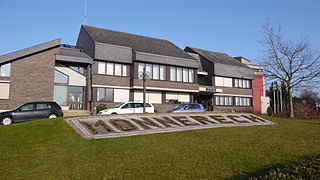 Mondercange is a commune in the canton of Esch-sur-Alzette in south-western Luxembourg. It derives its name from its principal town, Mondercange. As of 2018 the commune has a population of 6,936 inhabitants.

Luxembourg 1. Division is the third level in the league system of Luxembourg football.

Union Sportive Sandweiler is an association football club based in Sandweiler, in southern Luxembourg. Founded in 1937, the club's senior team currently plays in the Luxembourg Division of Honour, the second tier of the league system, after winning promotion at the end of the 2011–12 season.

The Luxembourg 2. Division is the fourth tier of the Luxembourg football league system. There are a total of 28 teams in the division, which are split into two groups of 14.

The 2016–17 Luxembourg Cup was the 92nd version of the association football knockout tournament. This competition began on 3 September 2016 and ended on 28 May 2017.

Leandro Barreiro Martins is a Luxembourgish professional footballer who plays as a midfielder for Bundesliga club Mainz 05 and the Luxembourg national team.

Raymond Wagner was a Luxembourgian footballer. He competed in the men's tournament at the 1948 Summer Olympics. He was also President of the Luxembourg Football Federation from 1981 until 1986

Betty Noël is a French-born Luxembourger footballer who plays as a defender for Division 2 Feminine club VGA Saint-Maur (France) and the Luxembourg women's national team. Noël started playing football as a child in Australia. Back to France she joined the under 16 team of VGA Saint-Maur, before joining the reserve team of Paris Saint-Germain. She then played in Division 2 in Issy-les-Moulineaux (France) before getting a severe knee injury. After surgery, Noël joined Division 2 Tremblay FC and RC Saint-Denis (France).

The 2020–21 Luxembourg National Division season was the 106th of top-tier association football in Luxembourg. The season began on 22 August 2020 and ended on 30 May 2021. The league winners qualified to participate in the 2021–22 UEFA Champions League.

The 2020–21 Luxembourg Cup was the 96th year of the football knockout tournament in Luxembourg. The cup began on 2 September 2020. If the cup had been completed, the winner of the cup would have earned a place in the 2021–22 UEFA Europa Conference League.

The 2021–22 Luxembourg National Division season is the 107th of top-tier association football in Luxembourg. The season began on 7 August 2021 and will end on 22 May 2022. The league champion will qualify to compete in the 2022–23 UEFA Champions League.