Mad World is on the air 24 hours a day, broadcasting all genres of Greek music (pop, hip hop, rock, etc.), 'rockumentaries' dedicated to famous Greek artists, and daily live shows that keep the audience informed about the events that take place in Greece. Mad World also focuses on the classic Greek hits of the last decade that are very popular among the Greeks worldwide.

Mad TV's production team is behind all the creative new formulas of Mad World and its ultimate goal is to make it the best satellite music channel. Mad TV wishes to spread Greek music all over the world through Mad World. What is more, it truly hopes to bring together Greek emigrants by informing their audience about current music events that take place in Greece, and/or the live appearances of the Greek artists abroad, thus benefiting both the Greek artists/singers and Greek songwriters.

It launched in December 2005 in Asia, Africa and Australia on UBI World TV and launched in New Zealand in 2008 when UBI World TV expanded their services to New Zealand. In June 2012, UBI World TV ceased operations, resulting in MAD World going off the air as UBI was the only provider (at the time) offering the channel anywhere in the world.

Mad World features programs that are tailored specifically for the station:

The Hits was a music video channel broadcast in the United Kingdom and Ireland, owned by Box Television. In 2008 it was rebranded as 4Music.

4Music is a British television channel launched on 15 August 2008, replacing The Hits. It is the only Channel 4-branded channel within The Box Plus Network. Its programming focuses on music It broadcasts from 07:00 to 03:00 daily with Music and entertainment programming.

MAD Greekz is a 24-hour Greek cable music channel that launched on September 12, 2008. It is a spin-off channel of MAD TV. It is available exclusively on NOVA and is commercial free.

XITE is an interactive music video platform. Founded in the Netherlands, XITE now reaches 80 million households across Europe and North America through linear networks, interactive TV, and on-demand streaming services. The company allows viewers to search, like, and skip through its catalogue; enjoy channels curated by its team of music experts; and create personalised channels based on genre, era and visual style using its unique Mixer feature. XITE is now live in the Netherlands, Belgium, Germany, the United States, Canada, the United Kingdom and Ireland, and has access to virtually every available music video through agreements with all major and top independent music labels. In the United States, it is available on the Amazon Fire TV, Apple TV and Roku streaming players as well as Comcast Xfinity and some Samsung TVs. 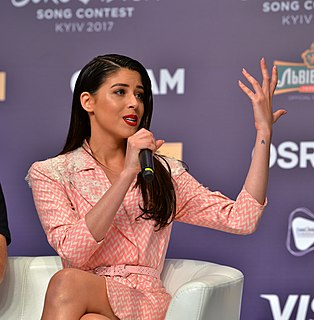 Dimitra Papadea, known professionally as Demy, is a Greek singer who is signed with the Greek independent label Panik Records. Until today Demy has released 2 Studio albums. "#1" in 2012, which became Platinum album and "Rodino Oniro" in 2014, which became Gold album. In 2017 she released "Demy", a collection of all of her English songs and later she released the album "Kontra" including two new songs and older songs and collaborations that had not been included in an album up to that time. Demy has achieved 8 No.1 songs and 2 No.1 EPs at the Greek charts so far. She also combined music and acting by having taken part in 5 musicals from 2012 to 2017.

NRJ Belgique is a private Belgian radio station broadcasting in Wallonia and Brussels, and is the Belgian version of the popular French radio station NRJ.

Trace Africa is an afro-pop music channel dedicated to airing Africa's top music artists. Trace Africa, Africa’s number one music channel, is dedicated to playing and showcasing music of Africa’s top artists and genres including Afro-pop, Coupé Décalé, Kwaito House, Afro-trap, Makossa, N’dombolo through radio and live concert events. Trace Africa is a smaller section of the larger Trace brand, a company dedicated to spreading music, news and culture throughout the African Diaspora. Trace Africa the radio show first premiered on DStv, in 2016 as a replacement to Trace Sports Stars through the whole continent and as of 2017 is also now on StarSat