A make-up or makeup artist (MUA) is an artist whose medium is the human body, applying makeup and prosthetics on others for theatre, television, film, fashion, magazines and other similar productions including all aspects of the modeling industry. Awards given for this profession in the entertainment industry include the Academy Award for Best Makeup and Hairstyling, [1] and entertainment industry awards such as the Emmy Awards, [2] [3] and the Golden Globes. [4] In some countries professional licenses are required by agencies in order for them to hire the MUA. Bigger production companies [5] have in-house makeup artists on their payroll although most MUA's generally are freelance and their times remain flexible depending on the projects.

Fashion makeup is used in magazine photography as well as on the fashion runway. Avant-garde makeup is also an applicable technique used for projects that require experimental themes. Fashion makeup is also commonly used in television and film ranging for the natural prime look to more sophisticated applications such as color balance.

Stage makeup is used as a method in conjunction with stage lighting to highlight the actors' faces in order to make expressions visible to the audience from moderate distances. This often includes defining the eyes and lips as well as the highlights and lowlights of the facial bones.

The use of special effects techniques enhancing physical features to exhibit metaphysical characteristics[ clarification needed ] as well as fantasy makeup. The use of prosthetics and plaster casting are also required for projects that entails non-human appearances. Accents such as theatrical blood and ooze are also techniques applicable to this type of makeup.

The use of an airbrush which is a small air-operated device that sprays various media some products and water-based makeup by a process of nebulization. The earliest record of this type of cosmetic application dates back to the 1925 [6] film version of Ben-Hur, it has recently been re-popularized by the advent of HDTV and digital photography, where the camera focuses on higher depths of detail. Liquid foundations that are high in coverage but thin in consistency are applied with the airbrush for full coverage without a heavy build-up of product.

Bridal makeup is a new segment in a makeup artist's repertoire. From ethnic, glamorous, to contemporary, makeup artists are now an important part of wedding planning in Asia, Europe, Africa and North America.

This is an art which involves the use of light [7] reflectors and ingredients such as minerals to give the skin a flawless finish. This was developed due to the further development of high definition [8] mediums and the cost implications of airbrush makeup.

In 1955 the Bollywood group Cine Costume Make-Up Artist & Hair Dressers' Association (CCMAA) created a rule that did not allow women to obtain memberships as makeup artists. [9] However, in 2014 the Supreme Court of India ruled that this rule was in violation of the Indian constitutional guarantees granted under Article 14 (right to equality), 19(1)(g) (freedom to carry out any profession) and Article 21 (right to liberty). [9] The judges of the Supreme Court of India stated that the ban on women makeup artist members had no "rationale nexus" to the cause sought to be achieved and was "unacceptable, impermissible and inconsistent" with the constitutional rights guaranteed to the citizens. [9] The Court also found illegal the rule which mandated that for any artist, female or male, to work in the industry, they must have domicile status of five years in the state where they intend to work. [9] In 2015 it was announced that Charu Khurana had become the first woman to be registered by the Cine Costume Make-Up Artist & Hair Dressers' Association. [10]

Nip/Tuck is an American medical drama television series created by Ryan Murphy that aired on FX in the United States from July 22, 2003, to March 3, 2010. The series, which also incorporates elements of crime drama, black comedy, family drama, satire, and psychological thriller, focuses on "McNamara/Troy", a cutting-edge, controversial plastic surgery center, and follows the personal and professional lives of its founders Dr. Sean McNamara and Dr. Christian Troy. Each episode features graphic, partial depictions of the plastic surgeries on one or more patients, as well as developments in the doctors' personal lives. Focus is also given to McNamara/Troy's anesthesiologist Dr. Liz Cruz, Christian's many sexual partners, and Sean's family. With the exception of the pilot, each episode of the series is named after the patient(s) scheduled to receive plastic surgery. 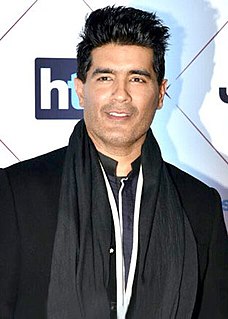 Manish Malhotra is a former Indian fashion designer turned costume designer and stylist, widely known for his works in Bollywood, Telugu cinema, Tamil cinema, Hollywood, and television. In 1998, he ventured into modelling and runway fashion designing with his couture Reverie-Manish Malhotra. He received appreciation for his glamorous ensembles using traditional colours, craftsmanship, textures and embroideries presented at his first runway show in November 1999. In 2005, he launched his couture label Manish Malhotra which offers bridal, couture, diffusion and men's wear collections and retails at two stores in Mumbai and New Delhi. The label also retails at multi-brand boutiques across India and in Dubai.

Michael George Westmore I is an American make-up artist best known for his work in various Star Trek productions, winning nine Emmy Awards, and is a member of the Westmore family. He won the Academy Award for Make-up in 1985 for his work on the film Mask. His career began at Universal Studios in 1961, and spanned four decades, including working for the CIA creating make-up kits for spies overseas. 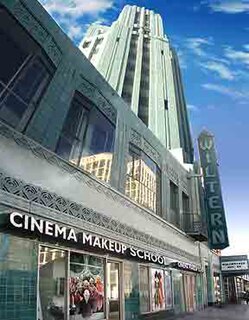 The Kaashtha sari is a style of sari draping is very similar to the way the Maharashtrian dhoti is worn. The word Kaashtha refers to the sari being tucked at the back. Since this sari is usually worn by using a single nine yard cloth, it is also referred to as Nauvari which means Nine Yards. Sakachcha sari is another term commonly used to refer to this style of sari. It is referred to as Akanda Vastra, which means it doesn't need any other attire to support it. In fact, this attire holds utmost importance as women across different walks of life have worn it. It is not just worn at religious and cultural events, but women have fought wars in the past and still work in farmlands wearing this. 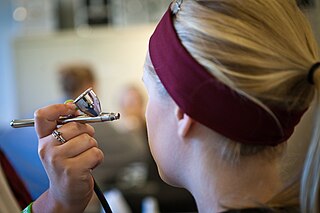 Airbrush makeup is makeup sprayed onto the skin using an airbrush machine instead of being applied with sponges, brushes, fingers, or other methods. A typical airbrush system uses a compressor to create airflow through a hose connected to a trigger-controlled spray painting gun. The airbrush pressure can be adjusted to apply various types of makeup, such as lighter, heavier, or more detailed styles. Airbrushes are used in film, theater, bridal makeup, and sunless tanning. Airbrush systems designed for personal, in-home use are usually smaller and work at a lower pressure than systems used in professional applications.

Crist Ballas is a make-up artist for film and television. Ballas owns and operates Metamorphosis Make-Up Arts; a make-up and prosthetic laboratory located in Minneapolis Minnesota.

David Petruschin, best known as Raven, is an American drag queen, make-up artist, and reality television personality from Riverside, California. Raven was a fixture in the Southern California nightclub scene before gaining international prominence for appearing in both the second season of RuPaul's Drag Race and the first season of All Stars. Raven placed as the runner-up on both seasons. He also served as a "professor" during all three seasons of RuPaul's Drag U. Petruschin has been RuPaul's makeup artist since Drag Race's ninth season and has since become a creative producer of both installments, All Stars and Drag Race. For his make-up work on the show, Petruschin received the Primetime Emmy Award for Outstanding Makeup for a Multi-Camera Series or Special (Non-Prosthetic) in 2020.

Nick Dudman is a British make-up effects and creature designer for motion pictures.

Joel Harlow is an American make-up artist. He works steadily in many high-profile films.

Julie Hewett is an American makeup artist. She first began working in the field with the 1987 film The Whales of August and since then has gone on to work with films such as American Beauty, Spider-Man 2, Ocean's Eleven and The Artist. Hewett has her own cosmetics company, Julie Hewett Los Angeles.

Christopher Allen Nelson is an American make-up artist, VFX artist, writer and actor. He is best known for his makeup and stylings for films such as Halloween, Kill Bill: Vol. 1, Pirates of the Caribbean: The Curse of the Black Pearl, Kill Bill: Vol. 2, Sin City, Thor: The Dark World, The Amazing Spider-Man, World War Z, Inherent Vice, Deadpool, Guardians of the Galaxy Vol. 2 and Suicide Squad (2016) has earned him numerous awards and nominations. He also played the groom of Beatrix "Black Mamba" Kiddo in Kill Bill: Volume 2 and the cop with brownies in Halloween.

Kazu Hiro is a Japanese-born American special make-up effects artist and visual artist. He won the Academy Award for Best Makeup and Hairstyling for the biographical films Darkest Hour (2017) and Bombshell (2019) after earning nominations for the comedies Click (2006) and Norbit (2007).

Daniel Bauer is an Australian-born, Mumbai-based make-up artist and hairstylist known for his red carpet makeup work of Bollywood celebrities, his work for the Lakme Fashion Week and his makeup and hair styling academy.