In optics, a Mangin mirror is a negative meniscus lens with the reflective surface on the rear side of the glass forming a curved mirror that reflects light without spherical aberration if certain conditions are met. This reflector was invented in 1876 by a French officer Alphonse Mangin [1] [2] as an improved catadioptric reflector for search lights and is also used in other optical devices.

The Mangin mirror's construction consists of a concave (negative meniscus) lens made of crown glass with spherical surfaces of different radii with the reflective coating on the shallower rear surface. The spherical aberration normally produced by the simple spherical mirror surface is canceled out by the opposite spherical aberration produced by the light traveling through the negative lens. Since light passes through the glass twice, the overall system acts like a triplet lens. [3] The Mangin mirror was invented in 1876 by a French military engineer named Colonel Alphonse Mangin as a substitute for the more difficult to manufacture parabolic reflecting mirror for use in searchlights. Since the catadioptric design eliminated most of the off-axis aberration found in parabolic mirrors, Mangin mirrors had the added advantage of producing a nearly true parallel beam of light. They saw use in the late 19th century as reflectors for naval search lights. Its use in military applications was limited, since glass reflectors of any kind were thought to be too fragile and susceptible to enemy gunfire. [4]

Mangin mirrors are used in illumination and image forming optics such as search lights, headlamps, aircraft gunsights and head-mounted displays. Many catadioptric telescopes use negative lenses with a reflective coating on the back surface that are referred to as "Mangin mirrors", although they are not single-element objectives like the original Mangin, and some, like the Hamiltonian telescope, predate the Mangin's invention by over 60 years. [5] Catadioptric mirrors similar to the Mangin are found in the Klevtsov–Cassegrain, Argunov–Cassegrain telescopes, and Ludwig Schupmann's Schupmann medial telescope. [6] They are also used in compact catadioptric photographic lens designs that save on mass since aberration can be corrected by the mirror, itself. [7] Mangin mirrors are also used in null correctors, which are used to fabricate large aspheric mirrors. [8]

A parabolicreflector is a reflective surface used to collect or project energy such as light, sound, or radio waves. Its shape is part of a circular paraboloid, that is, the surface generated by a parabola revolving around its axis. The parabolic reflector transforms an incoming plane wave travelling along the axis into a spherical wave converging toward the focus. Conversely, a spherical wave generated by a point source placed in the focus is reflected into a plane wave propagating as a collimated beam along the axis. 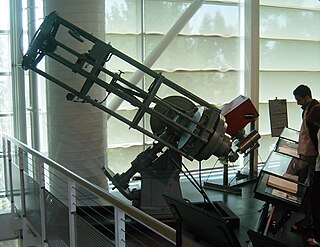 A Ritchey–Chrétien telescope is a specialized variant of the Cassegrain telescope that has a hyperbolic primary mirror and a hyperbolic secondary mirror designed to eliminate off-axis optical errors (coma). The RCT has a wider field of view free of optical errors compared to a more traditional reflecting telescope configuration. Since the mid 20th century, a majority of large professional research telescopes have been Ritchey–Chrétien configurations; some well-known examples are the Hubble Space Telescope, the Keck telescopes and the ESO Very Large Telescope. 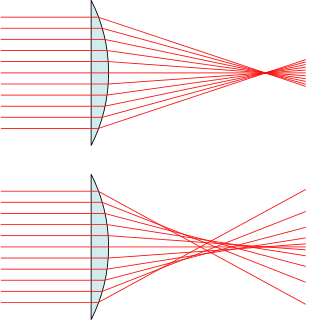 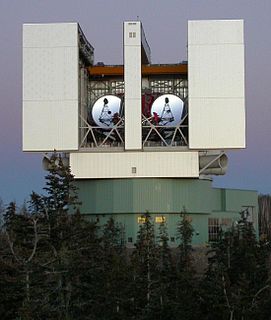 An optical telescope is a telescope that gathers and focuses light mainly from the visible part of the electromagnetic spectrum, to create a magnified image for direct visual inspection, to make a photograph, or to collect data through electronic image sensors. 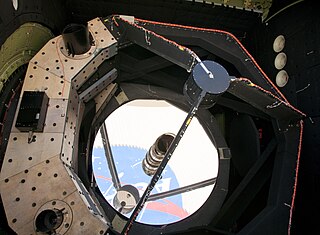 A Schmidt corrector plate is an aspheric lens which corrects the spherical aberration introduced by the spherical primary mirror of the Schmidt or Schmidt–Cassegrain telescope designs. It was invented by Bernhard Schmidt in 1931, although it may have been independently invented by Finnish astronomer Yrjö Väisälä in 1924. Schmidt originally introduced it as part of a wide-field photographic catadioptric telescope, the Schmidt camera. It is now used in several other telescope designs, camera lenses and image projection systems that utilise a spherical primary mirror. 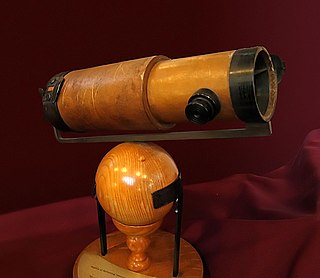 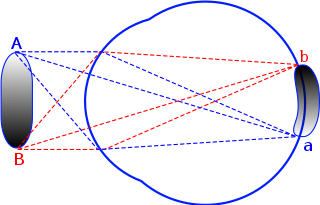 In geometrical optics, a focus, also called an image point, is a point where light rays originating from a point on the object converge. Although the focus is conceptually a point, physically the focus has a spatial extent, called the blur circle. This non-ideal focusing may be caused by aberrations of the imaging optics. In the absence of significant aberrations, the smallest possible blur circle is the Airy disc, which is caused by diffraction from the optical system's aperture. Aberrations tend to worsen as the aperture diameter increases, while the Airy circle is smallest for large apertures.

Dmitry Dmitrievich Maksutov was a Russian / Soviet optical engineer and amateur astronomer. He is best known as the inventor of the Maksutov telescope. 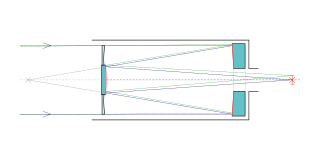 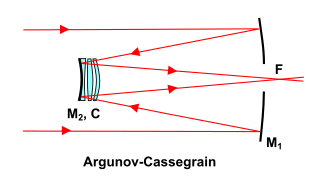 The Argunov–Cassegrain telescope is a catadioptric telescope design first introduced in 1972 by P. P. Argunov. All optics are spherical, and the classical Cassegrain secondary mirror is replaced by a sub-aperture secondary corrector group consisting of three air-spaced elements, two lenses and a Mangin mirror.

The Houghton telescope or Lurie–Houghton telescope is a catadioptric telescope. Houghton's original design was patented in 1944. Instead of the fairly hard to make Schmidt and heavy meniscus (Maksutov) corrector lenses, the corrector for the Houghton is relatively easy to make. It consists of two lenses: a positive and a negative, set at the front of the telescope which fixes the telescope's aperture. All lens and mirror surfaces are spheroidal, which eases construction. These lenses are relatively thin, though not as thin as the Schmidt corrector. With a good anti-reflective coating, light loss and "ghost" reflections are minimal.

An anastigmat or anastigmatic lens is a photographic lens completely corrected for the three main optical aberrations: spherical aberration, coma, and astigmatism. Early lenses often included the word Anastigmat in their name to advertise this new feature. The first Anastigmat was designed by Paul Rudolph for the German firm Carl Zeiss AG in 1890.