Martha Bowes MacCallum [1] (born January 31, 1964) is a news anchor for Fox News, she is the host of The Story with Martha MacCallum . MacCallum joined the network in 2004. Her interviews with President Barack Obama, General David Petraeus, John McCain, New Jersey governor Chris Christie, Laura Bush, and others have been featured on her programs.

Martha MacCallum was born in Buffalo, New York, the daughter of Elizabeth B. and Douglas C. MacCallum, Jr. She grew up in Wyckoff, New Jersey. After graduating from Ramapo High School in Franklin Lakes, New Jersey, [1] [2] MacCallum earned her bachelor's degree in political science from St. Lawrence University and also studied at the Circle in the Square Theatre School, founding the Miranda Theater Company in New York. MacCallum next worked as an associate in corporate relations at Dow Jones & Company. [1] [3]

She was at Wall Street Journal Television from 1991 to 1996, where she served as a business news correspondent and anchor for The Wall Street Journal Report , World Market Outlook, and Business USA. In 1996, she moved to WPXN-TV, a sports and business station in New York, as an anchor and reporter.

MacCallum was next a reporter/anchor for NBC/CNBC. She frequently contributed to The News with Brian Williams , Today , NBC affiliate news programs, and CNBC World before being assigned to co-anchor CNBC's Morning Call with Martha MacCallum and Ted David. She also appeared on Checkpoint, an evening show which examined homeland security and the War on Terror. MacCallum created the series "Inside the Business" for Business Center, a former CNBC show.

MacCallum joined the Fox News Channel in 2004, and covered the 2004, 2008, 2012, and 2016 presidential elections. She co-anchored the coverage of the visit of Pope Francis to the United States and the funeral of Pope John Paul II.

In 2017, MacCallum was named the host of a new program, The First 100 Days, on Fox News Channel, which debuted January 9, 2017. It was created as a replacement for Tucker Carlson Tonight when that program moved to the time slot formerly occupied by The Kelly File after Megyn Kelly's departure. [4] On April 28, 2017, the show was rebranded as The Story with Martha MacCallum. [5]

Roger Eugene Ailes was an American television executive and media consultant. He was the chairman and CEO of Fox News and Fox Television Stations, from which he was fired in July of 2016 for engaging in multiple sexual harassment cases with 23 known victims. Ailes was a media consultant for Republican presidents Richard Nixon, Ronald Reagan, and George H. W. Bush, and for Rudy Giuliani's first mayoral campaign. In 2016, he became an adviser to the Donald Trump campaign, where he assisted with debate preparation.

Ramapo High School is a comprehensive four-year public high school located in the New York City suburb of Franklin Lakes, in Bergen County, New Jersey, United States. The school is a part of the Ramapo Indian Hills Regional High School District, serving students in ninth through twelfth grades from Franklin Lakes, Oakland and Wyckoff (FLOW). The other high school in the district is Indian Hills High School, located in Oakland. Students in eighth grade in the three sending districts have the opportunity to choose between Ramapo and Indian Hills by February in their graduating year.

Stephen James "Steve" Doocy is host of Fox & Friends on Fox News and an author. 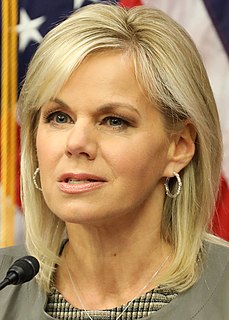 The Call is an American television business news program which on CNBC between 11AM to 12 noon ET weekdays from August 2007 to October 2011. Previous programs shown in the same time slot were The Money Wheel with Ted David and Martha MacCallum and Market Watch and Morning Call. The Call offered a clear focus on real-time market coverage at the heart of the trading day.

America's Newsroom is an American television news program on Fox News Channel currently hosted by Bill Hemmer and Sandra Smith. Episodes air live from 9 a.m. - 12 p.m on Monday through Friday. The show focuses on the development of the day's events with interviews, current event updates, and political analysis. The show has been a part of the Fox News program lineup since February 12, 2007, and is the number one cable news broadcast in its time slot. 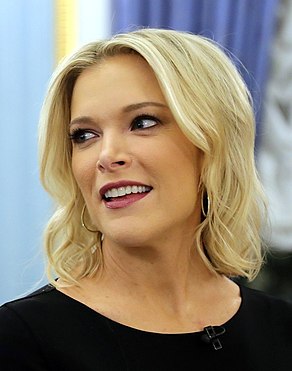 Megyn Marie Kelly is an American journalist and former corporate defense attorney. She was a news anchor at Fox News from 2004 to 2017, and a talk show host and correspondent with NBC News from 2017 to 2018.

America Live with Megyn Kelly was an American news program that aired on the Fox News Channel. The show aired from February 1, 2010 to late 2013, and was hosted by Megyn Kelly, former co-host of America's Newsroom. It aired 1:00–3:00 PM Eastern Standard Time Monday through Friday. 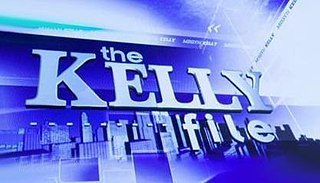 The Kelly File was an American news television program hosted by journalist and former attorney Megyn Kelly on the Fox News Channel. The program was a spinoff of The O'Reilly Factor, and focused on late-breaking stories in a live format as well as news analysis and in-depth investigative reports interspersed with newsmaker interviews.

The Real Story was an American current affairs television program hosted by journalist Gretchen Carlson on the Fox News Channel. Prior to its cancellation, the show was hosted by a rotation of anchors following the expiration of Carlson's contract with Fox News in late June 2016. During Carlson's tenure with the show, it was known as The Real Story with Gretchen Carlson.

Tucker Carlson Tonight is an American talk show hosted by Tucker Carlson. The show is broadcast live on the Fox News television channel at 8:00 p.m. EST on weekdays. Its content focuses on politics, and the show typically includes commentary, monologues, interviews and analysis.

The Story with Martha MacCallum, is an American television news/talk program on Fox News Channel currently hosted by Martha MacCallum. Episodes air live from 7 p.m. ET/6 p.m. CT on Monday through Friday. The show has been a part of the Fox News program lineup since January 9, 2017, and is the number one cable news broadcast in its time slot.

Megyn Kelly Today was an American daytime talk show that was broadcast by NBC. Premiering on September 25, 2017, it replaced Today's Take as the third hour of NBC's national morning show Today. The program was hosted by Megyn Kelly, who had joined NBC News earlier in the year after leaving Fox News, and was the second of two NBC News programs promised to Kelly upon her arrival, alongside her newsmagazine Sunday Night with Megyn Kelly.