Ian Koromah (born 1995), better known by the stage name Maxsta, is an English grime MC from South East London. He is signed Just Jam, a subsidiary of Sony Music Entertainment. [1] A fast-paced, choppy style of delivery has led him to be compared to fellow London rapper Dizzee Rascal. [2] He has worked with Tinie Tempah, Chipmunk, and Wiley. [3]

Koromah was born in Lewisham, London in 1995. His parents had moved from Sierra Leone to avoid its civil war. Raised in Peckham, Koromah's family then moved to East Ham in the borough of Newham. [4] It was here that Koromah attended Langdon School: the same school as Kano attended. [2] He became known as Maxsta after telling people his name was Maxwell to avoid being called Ian. [5] While at school Koromah became heavily interested in music, taking lessons in the guitar, piano and cello. [4]

Koromah has stated in several interviews that he enjoys a diverse selection of music. As a child he was initially into rock music and skateboarding [6] before becoming interested in grime, being introduced to it through JME's "Shut Your Mouth" and Ghetto's "2000 and Life". [7]

By the age of 14, a growing love of the genre led Koromah to experiment with rapping himself. Early in his career Maxsta went by the name Macksta. His music was heard by several other MCs in London, including the rapper God’s Gift, part of the grime collective Mucky Wolfpack, based in Bow. This led him to join the group. Shortly afterwards however, he decided to go solo. [7] Koromah worked with several well established names in grime over this period, including the MC Jammer. [8]

On 30 June 2009, [9] Koromah released East London Is Back, a "stunningly spartan Atari teenage riot of electro bloops and beeps". [2] The song received much attention and was given support by national radio stations BBC Radio 1 and BBC Radio 1Xtra. [7] This paved the way for a mixtape, The Maxtape, released on 29 March 2010. [7] It was a commercial success, selling out in the first few days. [10] Shortly afterwards, Koromah performed at T in the Park 2010. [3]

However, in response to the lyrical content in his music, Koromah suffered several physical assaults, including one incident in which he was stabbed. [4] To avoid continuing violence Koromah and his family left East Ham, moving to Essex. This string of incidents prompted Koromah to rethink his approach to music.

His new musical direction was reflected in the song Average Kid, which was released in early 2011. [11]

Shortly afterwards, in March 2011, Koromah was signed to Just Jam Records, a subsidiary of Sony Music Entertainment. [1] The label is owned by entrepreneur Jamal Edwards, CEO of the successful online urban music platform SB:TV. Subsequently, Koromah featured in the 2011 Google Chrome advert, the second most popular YouTube advert of the year. [12] Koromah was also involved in the Adidas We Are London advertising campaign. [13]

On 5 August 2012, Koromah's debut single was released, titled "I Wanna Rock". [2] It reached number 67 in the UK charts [14] and received support from several radio DJs; it was featured as Radio 1 presenter Nick Grimshaw's record of the week. [2] "I Wanna Rock" was also remixed and featured guest vocals from fellow London rapper Tinchy Stryder, Rizzle Kicks and the Birmingham-based MC Lady Leshurr. [15]

His third single "Wanna Go" featuring Little Nikki was released on 29 September 2013. It entered the UK Singles Chart at number 46, being his most successful single to date.

He dropped a new freestyle in 2016 called "M Sport Riddim". He went on The Grime Show: Rinse FM with Sir Spyro.[ citation needed ]

On 19 March 2012, Koromah announced via Twitter that his brother Kevin Koromah had died at the age of 14. Speaking several months later, he stated: "That day I became a beast ... For me, failure is not an option now; it's not in my vocabulary. The last thing I want is my brother to look down and see me wasting my opportunity." [2] Tim Westwood is a British DJ and presenter of radio and television. He is often referred to by other DJs and artists appearing on his shows simply as Westwood. He presented the MTV UK show Pimp My Ride UK. In 2013, Westwood left BBC Radio 1 and BBC Radio 1Xtra after nearly twenty years and returned to Capital Radio.

Grime is a genre of electronic music that emerged in London in the early 2000s. It developed out of the earlier UK dance style UK garage, and draws influences from jungle, dancehall, and hip hop. The style is typified by rapid, syncopated breakbeats, generally around 140 beats per minute, and often features an aggressive or jagged electronic sound. Emceeing is a significant element of the style, and lyrics often revolve around gritty depictions of urban life.

Paris Moore-Williams, better known by his stage name P Money, is a British grime MC, rapper and songwriter from New Cross, South East London, who is also active in the bassline scene. He is best known for his live performances as well as for songs such as Slang Like This, Anthemic and Round the Clock. N.E was the founding member of Lewisham-based grime crew OGz and p-money released one album with the group entitled OGz Season Vol. 1. He also appeared on the sixth edition of highly popular grime DVD Lord of the Mics in a grime clash (battle). 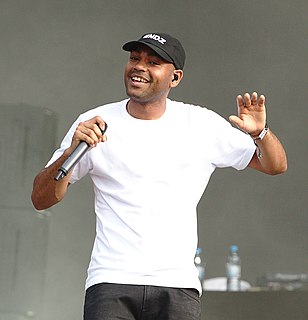 Kane Brett Robinson, better known as Kano, is a British rapper and songwriter from East Ham, London. A significant contributor to grime music, Kano is widely considered one of the pioneers of grime music and culture, alongside artists such as Wiley and Dizzee Rascal. In 2004, Kano released his debut single "Ps and Qs", which was an underground hit within the grime community.

Justin Clarke, better known by his stage name Ghetts is a British grime MC, rapper and songwriter from Plaistow, London with Caribbean roots from Jamaica and Grenada. His music has been played on national radio stations such as BBC Radio 1, Kiss 100, BBC Asian Network, and BBC Radio 1Xtra. Currently, Ghetts is signed to independent record label Disrupt, and released his debut studio album, Rebel with a Cause, on 9 March 2014. Known for his hard hitting lyrics and intricate rhyme schemes, he is associated and has toured internationally with such acts as Kano and was a member of NASTY Crew. 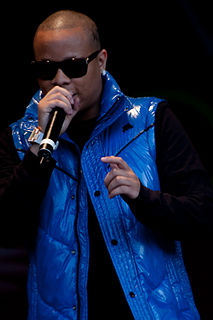 James Christian Charters, better known as Ironik, is a British musician, DJ and rapper. His genre of music varies from hip hop, grime, R&B and UK garage. DJ Ironik was born in London.

Jahmaal Noel Fyffe, better known by his stage name Chip, is a British rapper and songwriter from Tottenham, North London. In the past 14 years he has collaborated with the likes of Skepta, T.I., Meek Mill, Ella Mai, Young Adz and many others. In 2009, he released his debut album, I Am Chipmunk, featuring four songs which peaked in the top 10 of the UK Singles Chart, including the chart-topping "Oopsy Daisy". In 2011, Chipmunk released his follow-up album, the American hip hop-influenced Transition. It included the single "Champion" featuring Chris Brown, which peaked at #2 on the UK Singles Chart. 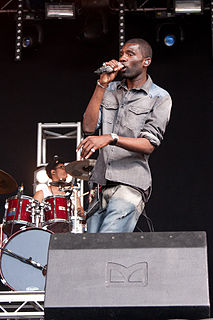 Jermaine Sinclaire Scott, better known by his stage name Wretch 32, is a British rapper, singer and songwriter from Tottenham, North London. He was a member of the grime collective "Combination Chain Gang", before forming The Movement with Scorcher, Ghetts, and Mercston.

}} "Hello Good Morning" is a song by American rapper and producer Diddy and his group Dirty Money, from their debut album, Last Train to Paris. It was released from March 30, 2010 as the album's third single. The electronic dance song incorporates an acid squelch section in the middle 8, ad was written by Marcella Araica, Richard Butler, Clifford "T.I." Harris and Nathaniel "Danja" Hills who also produced the song. T.I. has a featured rap on the song. The song's musical composition was inspired by Diddy's experiences in Ibiza night clubs; its lyrics focus around sex and money. Three official remixes were released alongside the main single: the Official Remix with Rick Ross & Nicki Minaj, the "Grime Remix" with Skepta, and a "Team UK remix" with Tinchy Stryder and Tinie Tempah. Critics noted the track as one of the better songs from Last Train to Paris, particularly for Danja's production, but criticized the lyrics for being superficial and for lacking substance.

Ashley Charles, also known as Amplify Dot, A.Dot or Dotty, is an English rapper, DJ, and radio and television presenter. She is best known for presenting on BBC Radio 1Xtra from 2014 to 2020 and co-presenting the BBC One show Sounds Like Friday Night alongside Greg James from 2017 to 2018.

Amary Lorenzo, better known as Scrufizzer, is an English MC and producer from West London. Who first gained recognition as a grime producer before building a reputation for his bashment-influenced flow and versatility. 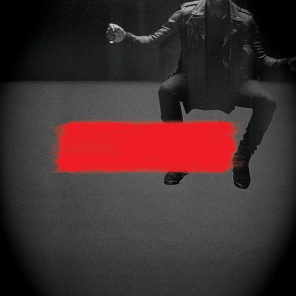 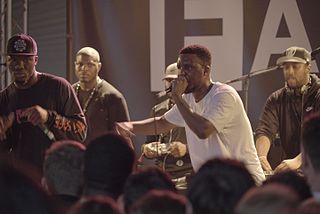 Kwadwo Quentin Kankam, better known by his stage name Novelist, is a British grime MC and record producer from Lewisham in South London. He was a founding member of the Square crew and was nominated for Best Grime Act at the 2014 MOBO Awards. He has been called the "new face of grime" and was described as "the poster child for the first generation of real grime kids" by DJ Logan Sama. 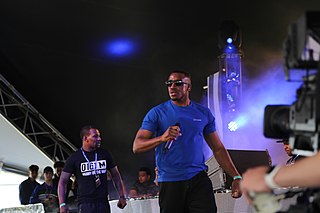 Aaron Davis, better known by his stage name Bugzy Malone, is a British rapper and actor from Manchester, England. Malone has been described as one of the key artists instigating a "grime revival" moving the UK urban scene away from more commercially oriented music, and the first artist in the grime genre from Manchester to commercially succeed in the UK.

Achi Avelino, better known mononymously by his stage name Avelino, is a British rapper and singer of Congolese and Angolan descent from Tottenham, London, known for his "unique tone" and "deep wordplay". 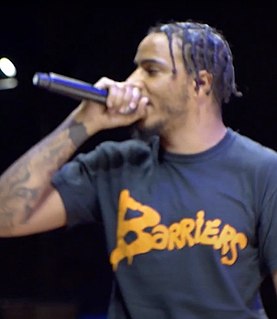 Ché Wolton Grant, known professionally as AJ Tracey, is a British rapper, singer, songwriter, and record producer. He is from Ladbroke Grove, West London. Tracey rose to popularity in 2016, and was listed by The Guardian in a list of "best new acts to catch at festivals in 2016".