Mike Dowler (born 12 October 1957) is a Welsh retired professional football goalkeeper. He spent most of his career in the U.S. indoor leagues where he was named the 1995 Continental Indoor Soccer League Goalkeeper of the Year.

The son of a Welsh train engineer, Dowler began his career with Newport County in 1975. In the fall of 1980, Dowler moved to the United States and signed with the Wichita Wings of the Major Indoor Soccer League. He was a 1983-1984 second team All Star with the Wichita Wings. On September 26, 1985, he signed as a free agent with the Tacoma Stars. [2] On February 1, 1986, he had reconstructive knee surgery which put him out until May 1987. [3] He then injured his hand early in the 1988-1989 season, losing most of the season. On August 1, 1989, he signed with the Kansas City Comets. The Comets folded at the end of the season and the Stars picked him up for the 1991-1992 season. The Stars folded at the end of the season and Dowler found himself without a team until October. That month, the Dayton Dynamo lost their goalies during the pre-season. They then signed Dowler to a short term contract. [4] While he remained with the Dynamo as an "on call" backup goalkeeper, he never played a regular season game. In January 1993, he signed with the Denver Thunder of the National Professional Soccer League. [5] He finished the season with the Thunder, then worked for a financial services company in Federal Way, Washington until signed by the Sacramento Knights of the Continental Indoor Soccer League on a two-game contract in August 1994. He won both games and was signed by the team for the remainder of the season. [6] He then spent the next two seasons with the Knights before breaking his left arm with a month left in the 1995 season. He returned for the 1996 season, but suffered from several injuries including a sprained ankle at the start of the season and another broken left arm during the season. [7] As a result of these injuries, Dowler retired at the end of the season. He currently employed as a lecturer.

The Major Indoor Soccer League (MISL), known in its final two seasons as the Major Soccer League, was an indoor soccer league in the United States that played matches from fall 1978 to spring 1992.

The Wichita Wings were a professional indoor soccer franchise based in Wichita, Kansas. The Wings were admitted to the Major Indoor Soccer League as an expansion team on August 21, 1979. They played in the Kansas Coliseum, a venue that featured a 200-by-85-foot field and seating for 9,681 fans.

Stephen Kinsey is an English former football forward who began his career in 1979 with Manchester City before moving to the United States in 1986. He then played professionally in the Major Indoor Soccer League, American Soccer League and others before retiring in 1997.

Keith Weller was an English footballer. He is considered to be one of Leicester City's greatest ever players.

Jeffrey "Jeff" Durgan is a retired U.S. soccer defender who played professionally for the New York Cosmos and seven times for the U.S. national team.

Danny Pena is a retired U.S. soccer defensive midfielder. He spent most of his career, both indoors and outdoors, with teams in the western U.S.

Dale Ervine is a former U.S. soccer midfielder who spent most of his career playing indoor soccer. He also earned five caps with the U.S. national team between 1985 and 1993.

Mark Kerlin is a retired U.S. soccer forward who spent most of his career in indoor leagues. He also played one season in the Western Soccer League and two in the American Professional Soccer League.

Juan de la O is a Mexican indoor soccer goalkeeper who played in several U.S. indoor leagues. He was the 1997 Continental Indoor Soccer League Goalkeeper of the Year. 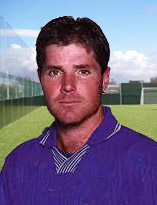 Barry Daniel Wallace was an English football defender who played professionally in the Football League, North American Soccer League and Major Indoor Soccer League. After his retirement from playing, Wallace spent the rest of his life coaching youth soccer teams.

Jorge Espinoza is a retired professional soccer player from Chile who played in the Major Indoor Soccer League and National Professional Soccer League. He also coached at the high school, collegiate and professional levels including two games with the San Jose Clash of Major League Soccer in 1999.

Kevin Sloan is a retired American soccer player who played professionally in the American Soccer League, American Professional Soccer League and Major Indoor Soccer League. He has also coached professionally and is the former head coach of the Neumann College men's soccer team. Kevin took on a bigger role in 2015, when he resigned from Neumann to take on a new challenge as a scout for Manchester City

The 1991–92 Major Soccer League season was the 14th and final season in league history and would end with the San Diego Sockers winning their tenth NASL or MISL title in 11 indoor seasons, and fifth MISL title in a row.